Where Did All Those Kids Come From? 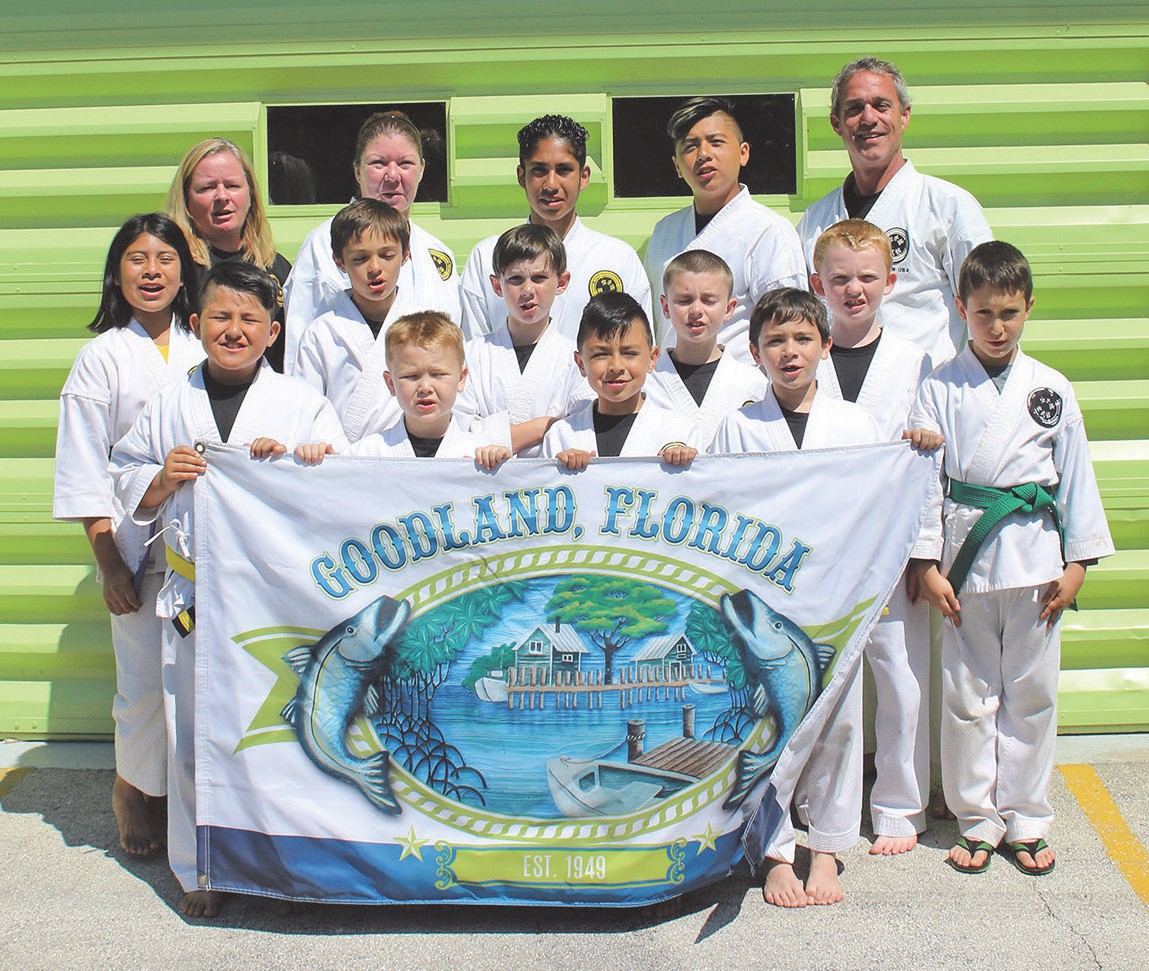 Monday morning March 13th dawned clear and cold in Goodland. The early morning temperatures were to be in the 50’s all week. At 9:00, as happens every Monday, the ladies of Joanie’s’ Juke Box popular exercise class began filing out of the Goodland Community Center into the chilly morning air to return to their homes. Shortly thereafter, a computer repair van marked Econicks Computer Service pulled in. The driver, dressed in what looked like white pajamas, started unloading gym mats and other equipment, hauling it inside the building. While he was doing this, parents began arriving and disgorging their kids, aged from 5 to 13 (about 15 of them) also dressed in white pajamas. The whole bunch disappeared inside the building, only to later reemerge for a march up the street to Margood Park, Goodland’s crown jewel,

Chris Martinez (7) assumes one of the required positions in his “Kata,” which is choreographed movements performed solo. Chris won three golds.

compliments of Collier County. Nick Lemke, one of Goodland’s native sons, and holder of a third degree black belt, had brought his YMCA Shima Dojo Karate class to Goodland for a week-long Karate camp. Goodland may never be the same.

In 2010, after 17 years of study, Lemke began Karate classes in his Goodland house. Four Goodland kids (Tyler Gresham and Zachary Burgess were among them) and four adults from Marco Island attended. The next year, his class had become so popular that he moved it up to the Y in Marco Island. “I went up there hoping to teach computers,” Nick recalled, “but I ended up teaching Karate.” He is still at it today, holding class two hours a day, six days a week. He has been studying Karate (“empty hand” in Japanese) for 24 years. “I 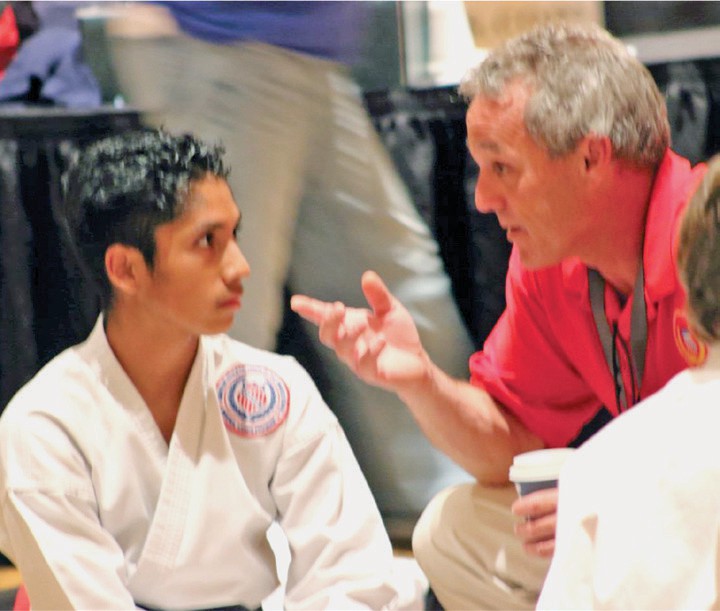 Lemke coaches Bryant Martinez (13) during the match. The intensity and concentration of Martinez is apparent, illustrating the strong bond between teacher and student. Bryant, who has devoted his life to Karate, will stay with his teacher for life. He went on to win a gold and a bronze.

believe it saved my life,” Nick says, “After being laid off by GE, it gave me something to focus on and commit to, other than my own troubles. I am hoping it can do the same for some of these kids, who need the same focus in their lives, as well as something to do after school.” Lemke says that in the last four years, ten of his students (eight kids and two adults) have won national championships in 16 events. It is hard to argue that he has not succeeded.

As his classes became more proficient, Lemke started sponsoring Karate camps to brush up and hone his students’ skills, especially before tournaments. Local Marco churches were the only venues available to him. Trouble was it sometimes took months for a church to get him on the calendar. 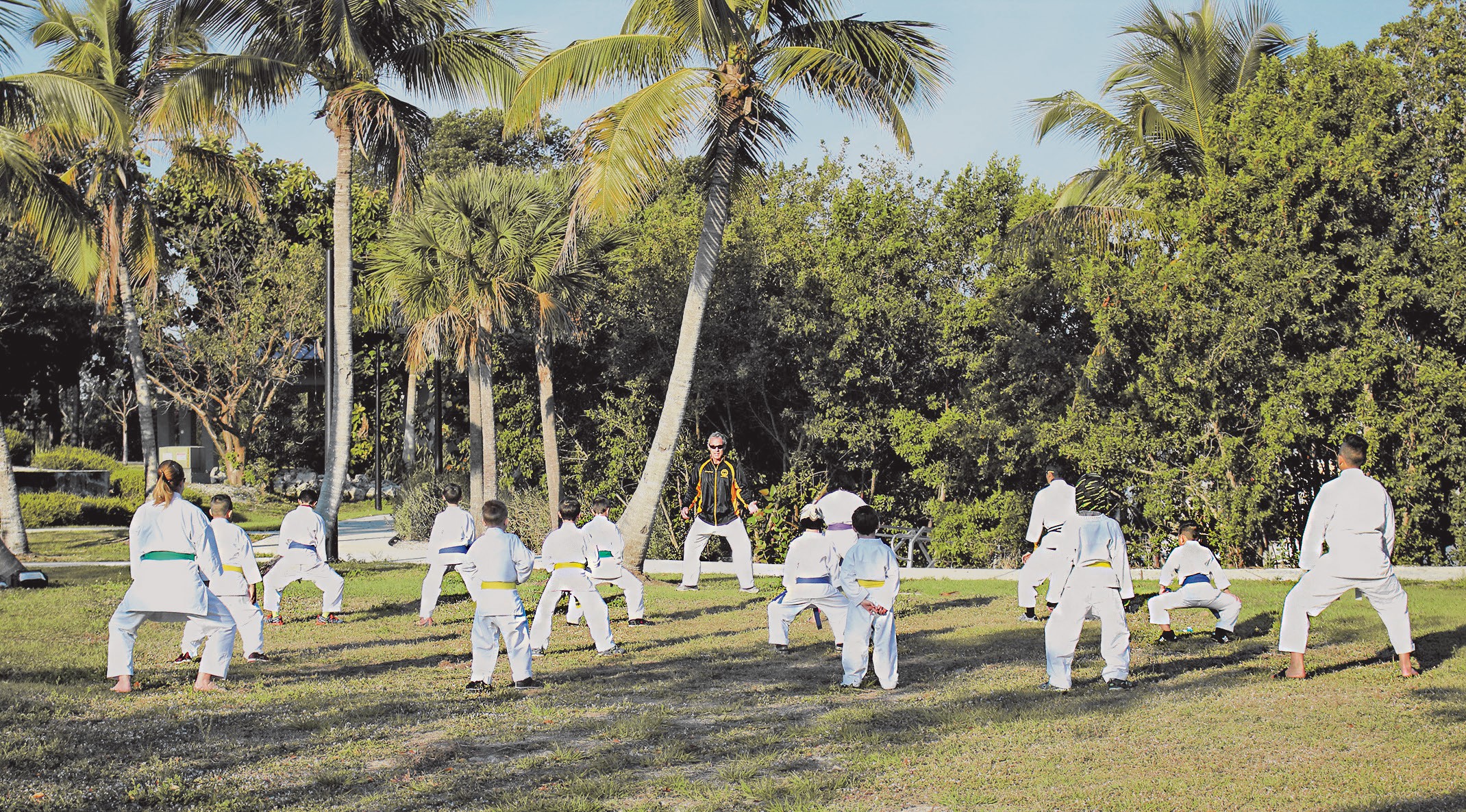 Lemke takes his students through their paces at Margood Park. Low temperatures didn’t dampen their spirits. Residents passing by reported their delight at seeing the youngsters working out in the park.

A bureaucratic maze had to be negotiated each time. It was a daunting slog for Nick. Enter the Goodland Civic Association. I had gotten to know Nick during his frequent house calls to care for my ailing computer. He asked if the GCA would be amenable to hosting a week-long Karate camp for his kids. Five years ago, we probably wouldn’t have entertained such a request. But a lot has changed in five years at the GCA. Our board has grown more congenial and collegial. There has been an influx of new blood, with new ideas. In the last year alone, we have added four new board members, as many of the old have stepped aside. One of these newcomers is Natalie Siavrakas, a bouncy and energetic woman, who almost immediately after taking her seat, laid out 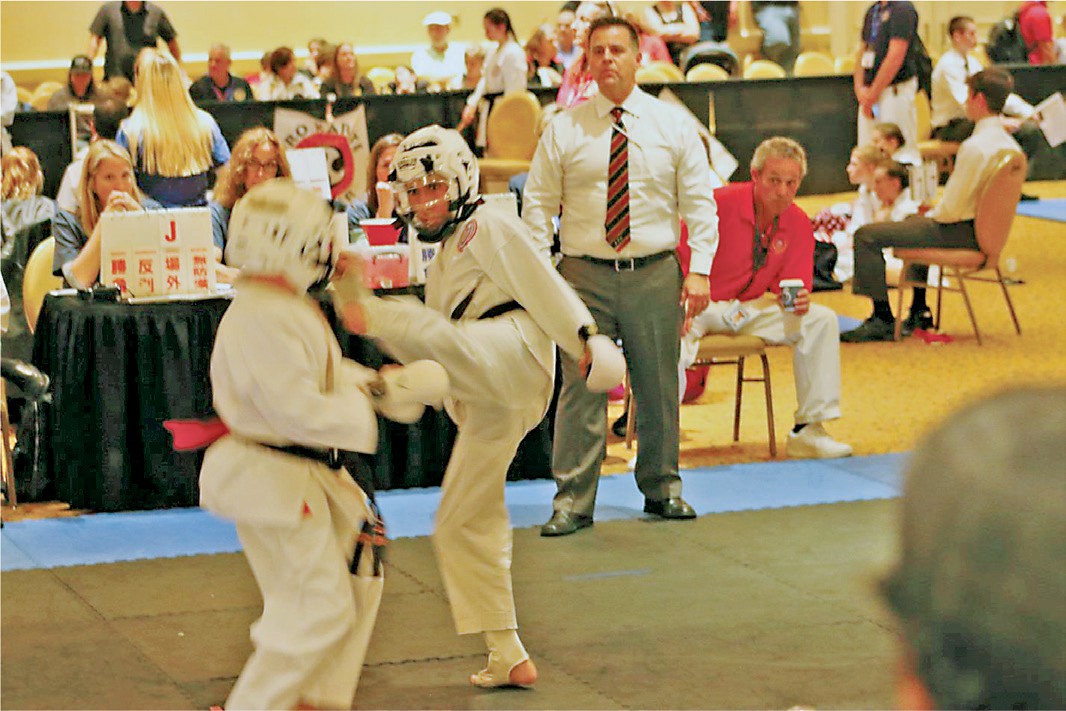 Mano a mano, black belt against black belt, Bryant Martinez scores a point against his opponent in this sparring competition. Bryant won a gold and bronze.

a wish list before the board, calling for expanded use of the Community Center. A weekly evening Mah Jongg club and morning coffee have already resulted. Activities for kids were also high on her list. The board listened and nodded. Fortuitously, Lemke had made his request while Siavrakas was still on a roll. Without undue delay, Lemke and his kids were welcomed to the Community Center – no bureaucratic maze here. Siavrakas would get a kids’ program. We had started laying the groundwork for just such an event three years ago, when insurance coverage was expanded.

Natalie Strom has already written an excellent article on Lemke’s amazing accomplishments as a student and instructor of Karate (“Goodland’s DOJO MOJO MAKER,” November 28, 2011, @coastalbreezenews.com). I have decided to emphasize Nick’s relationship to his students, one of whom lives in 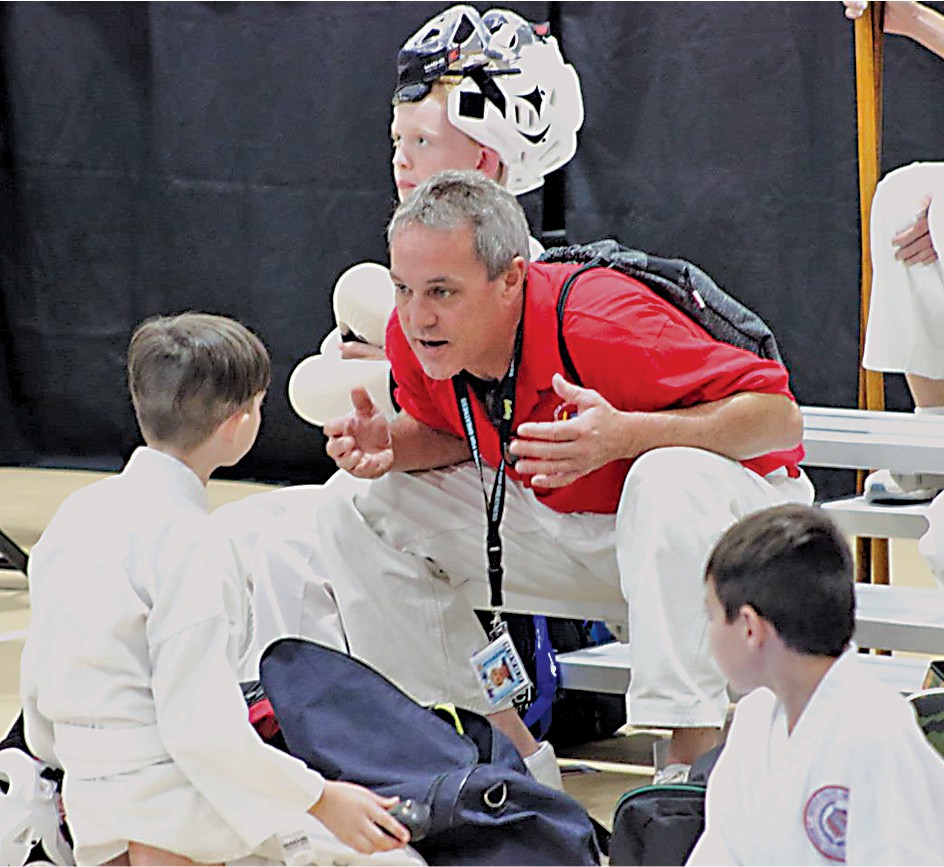 Goodland, and what they have accomplished as a result. Unfortunately, during the camp, my camera suffered a chronic malfunction and I was unable to take any photos either inside the Community Center or at Margood Park. I asked Nick to help out here and he did. Laurie McCardle, an adult member of the camp, who participated with her daughter, took some pretty good photos at the park. Other parents did the same at the tournament.

The camp, which ran from March 13th through the 17th, was meant to prepare the kids (and adult(s) for the Florida West Coast [AAU Karate] Championships to be held at Palm Harbor, Florida (just north of St. Petersburg) on March 18. It must have been a pretty good camp, as everyone in the group medaled (1st, 2nd, or 3rd) in at least one 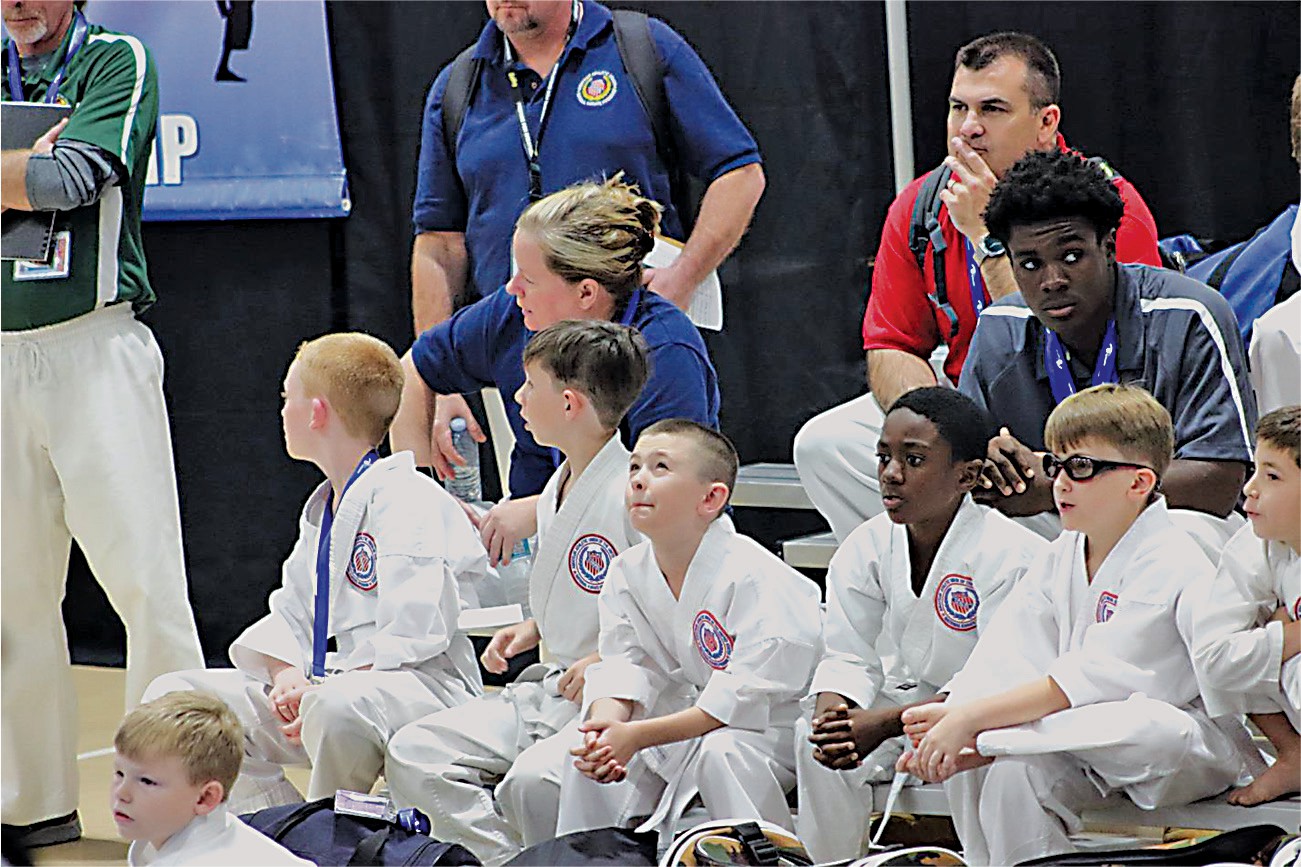 Three members of Lemke’s team caught up in the excitement and tension of watching one of their teammates compete. From left: Derek Nolan(7), Lincoln Garwood(9), and Cole Simmons(9). Asst. Coach Laurie McCardle (in blue) behind the boys.

event. They are all going on to regionals at Ft. Pierce on May 13. All but two have already qualified for the national championships to be held in Raleigh, North Carolina on June 28th. At Palm Harbor, Lemke estimated that close to 400 contestants from 25 teams were competing.

The kids, who were on spring break that week, convened each morning at the Community Center promptly at 9:30. After a short organizational meeting they would march over to Margood Park to practice some exercises for events in which they would be competing. On the morning I was there, the temperature was in the low 50’s as it was every morning that week. None of the group wore jackets – just your basic white pajama-like Karate uniform. Each uniform was cinched with a colored belt denoting a student’s progress 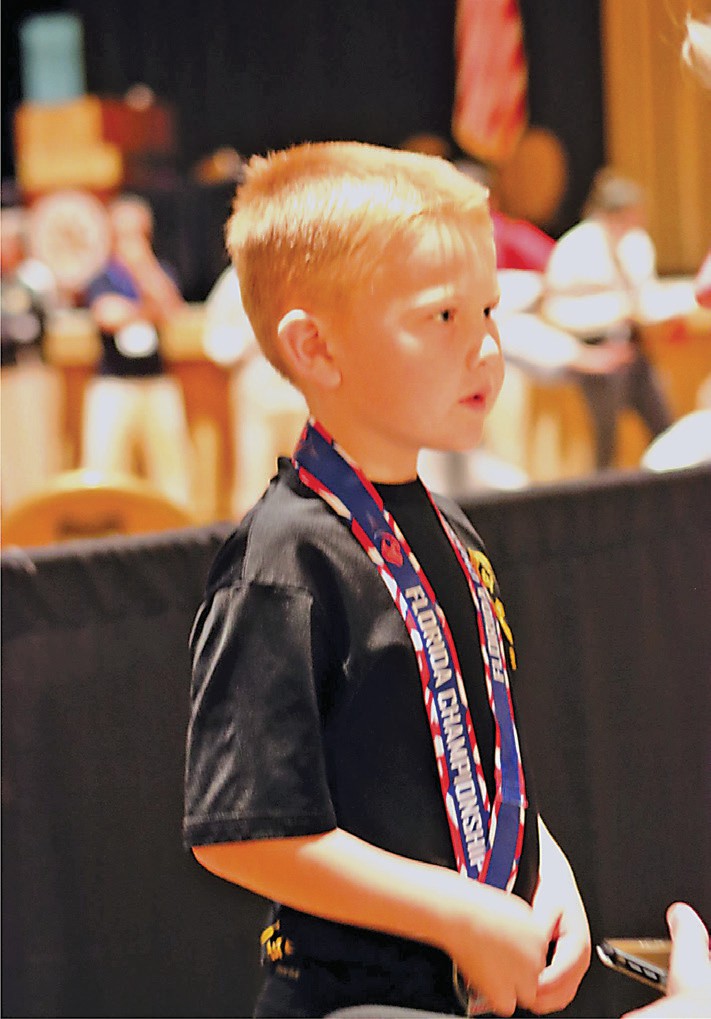 – white for beginners and then progressing through yellow, gold, orange, green, blue, purple, brown, red, and finally the coveted black belt. It took Nick 12 years to get his.

At the park, every eye was on the instructor. Every command (usually given in Japanese) was executed promptly. There was no talking or complaining here. These kids obviously respected their instructor and obeyed his commands without question. There was no doubt about who was in charge. It’s a good thing, because many of them would be coming back to Nick even after leaving the island. “We don’t play games here,” Nick said, “It’s all work. In Karate, you stay with your original instructor for as long as you live. These kids have already made that commitment.” 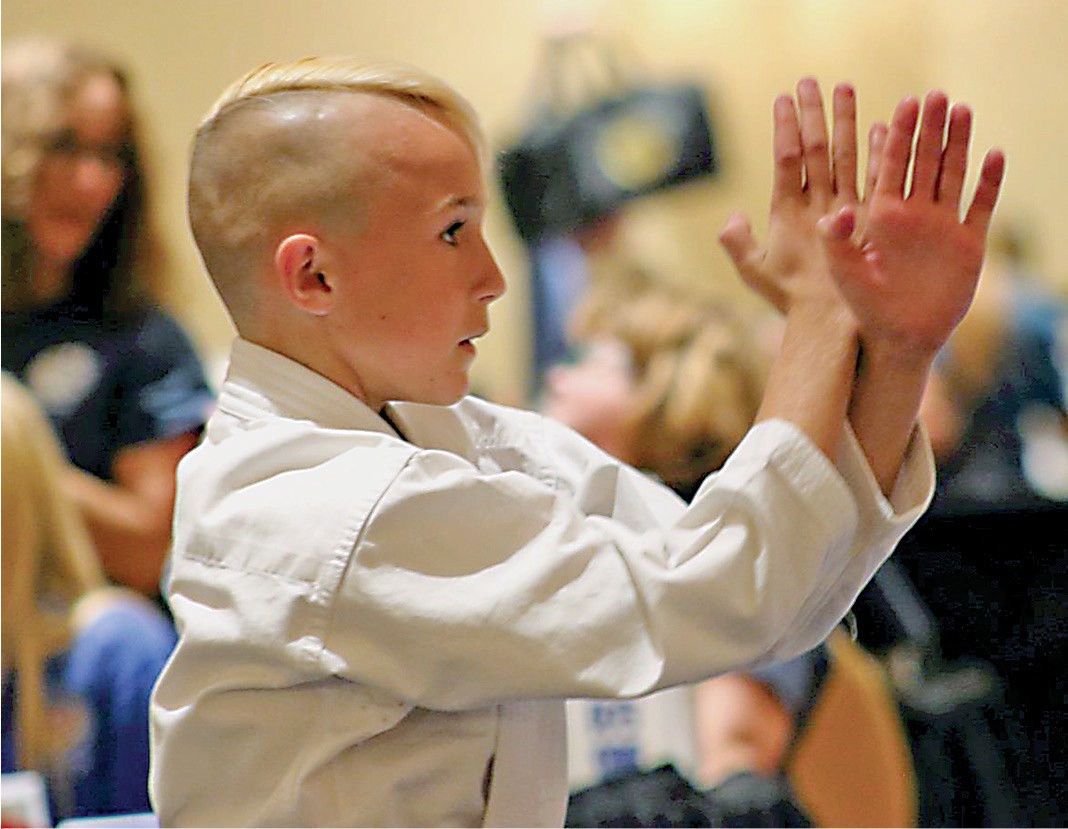 Chase Polley (11) during the performance of his solo “Kata” competition. Polley won two golds and a bronze.

couple hours – a neverending drumbeat of even toned commands from an instructor who knew exactly what he was doing. It is no wonder that studies about kids’ short attention spans don’t seem didn’t seem to apply, when he is teaching. They know he will get them up to the podium.

After a break for lunch, the group moved inside for some sparring and additional work on the mats, which covered most of the floor. Nick found the Community Center to be an ideal setting, for his class. “It’s a large area and practically kid proof,” he noted. There was plenty of room for the kids to gather round while duos squared off in the middle for some sparring. With ample protection for the head area, the kids tried to score points under the steady gaze of their 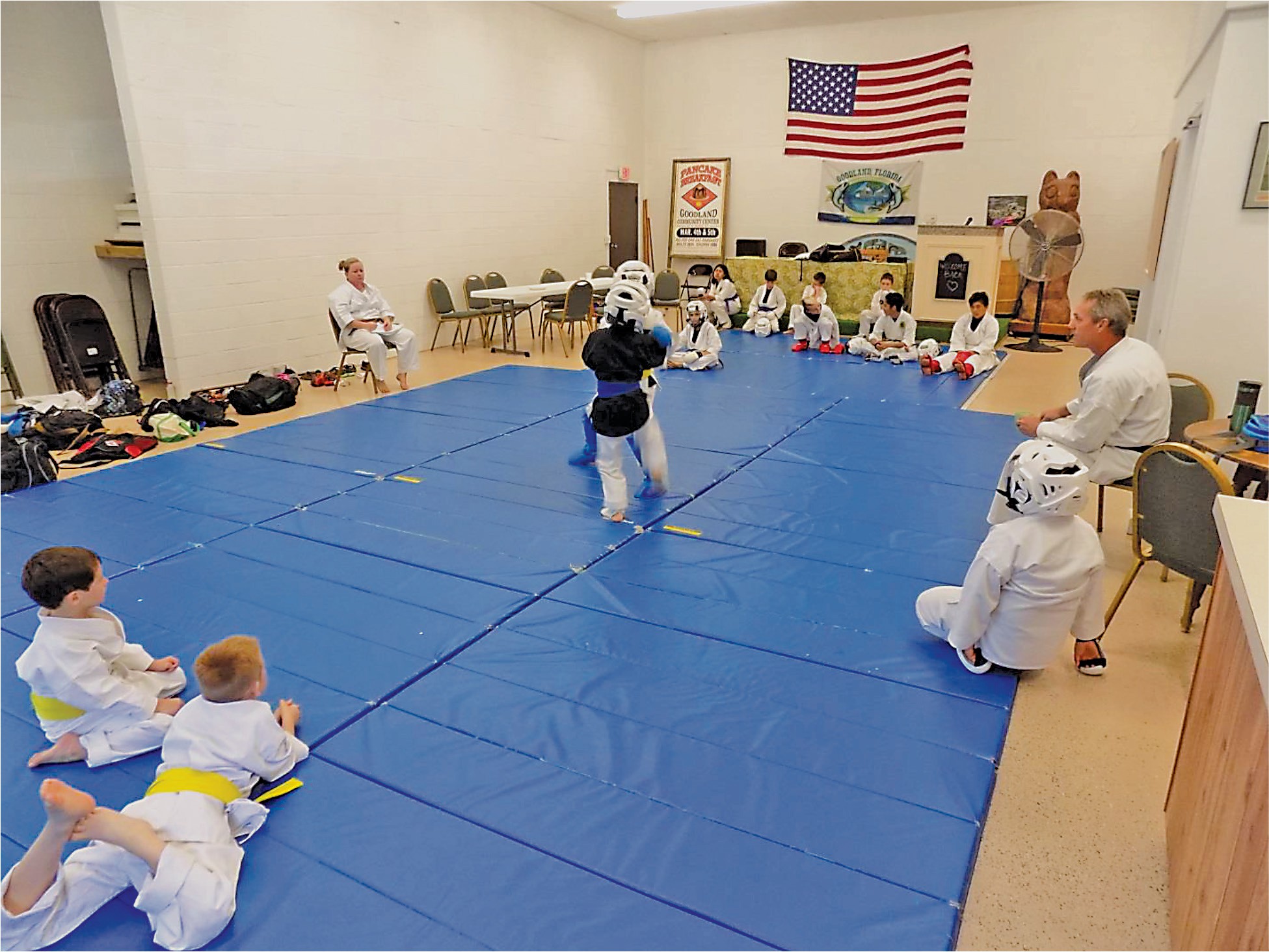 Students begin afternoon sparring in the Community Center, while coaches Lemke and Laurie McCardle look on.

instructor. Finally, camp over on Friday, the kids and their parents traveled to Palm City, the next day, staying overnight. They brought home a lot of hardware with them when they returned. Nick hopes to be able to conduct some more camps in Goodland this summer. “The GCA really rolled out the red carpet for me,” he said, “They eliminated the hassle and red tape and genuinely seemed to want us there. Never in my wildest dreams, did I ever envision teaching Karate in Goodland. It never occurred to me that this would be possible.” Up until now, he was probably right. Barry was a practicing attorney before he worked as a Special Agent of the FBI for 31 years. Barry worked for several government agencies another ten years before retiring to Goodland in 2006. Barry is presently the Secretary of the Goodland Civic Association.