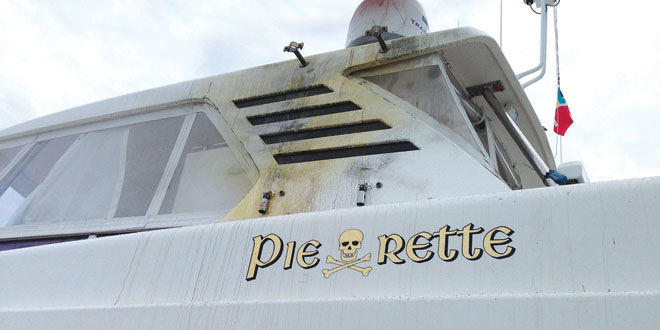 When planning a vacation, you always plan for something to go wrong—forgetting your toothbrush, umbrellas for rain—but not many people would plan on what to do if lightning strikes. The chances, in fact, of being hit by lightning are one in 700,000. In early June, the Gordon family was that one.

Captain Larry and Pierrette (Pete) Gordon, their two Standard Schnauzers, Ernie and Gucci, and Captain Doug Adamson set out aboard the Gordon’s 70 foot Horizon boat, named Pie-rette, for a four to six week voyage around the Bahamas. Traveling with them were friends on their own crafts. The trio of boats left their docking at the Esplanade Plaza for the Marco Island Yacht Club, waiting for the right tides to take them out. Leaving the Yacht Club in the early morning on June 8, the group began their trip, stopping in Miami for a couple of days while they waited for the weather to settle a bit. 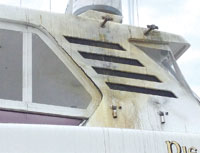 The Gordon’s had no idea it was their boat that was struck until morning. SUBMITTED PHOTOS

On June 11, the trio embarked to Cat Cay, Bahamas, docking there for the night.

They had dinner, and decided to head in for the night, mindful of the storm brewing outside around them. Around 4:30 in the morning, the Gordon’s were jolted out of bed by a strike of lightning they believed hit a nearby boat. Their electricity, as well as the electricity on the dock itself, had gone out, so they stumbled around for flashlights and went on deck to assess the situation.

The lightning had not hit a nearby boat; it had struck the Pie-rette, an exact hit to the flybridge. The flybridge, for those unfamiliar, is the highest point of navigation on a ship, usually an open deck above the pilot’s house. As the sun rose, the damage became clearer, as well as the bits of fiberglass covering the dock and other boats near to the Pie-rette. There was a clearly defined hole in the flybridge, and 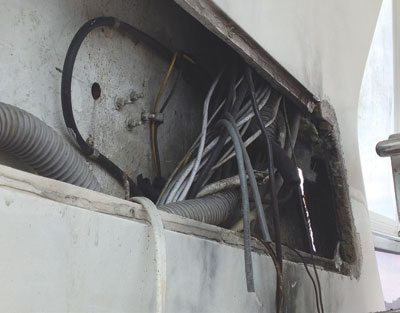 All electrical equipment was damaged.

the craft’s systems were completely shot; no water; electricity; and no refrigeration. The Gordon’s friends had some boat damage, but still had their electricity and water.

Obviously, they could not stay on the boat, nor continue their Bahamas adventure. Pete decided to charter a plane that travels into Cat Cay from Ft. Lauderdale every day to pick them up and take them back to the peninsula. They let the General Manager of Cat Cay, John McCranie, take the food from the boat to give to the locals to enjoy before getting on the six passenger prop plane that would take them to back to Ft. Lauderdale.

A taxi picked the family up at the airport to take them back to the island. En route, lightning struck close to the car, but the group made it home safe and sound only 12 hours after they were woken up. Thankfully no one has injured, and the family is tentatively planning to reschedule their trip for 2014.