When a newbie meets an oldie 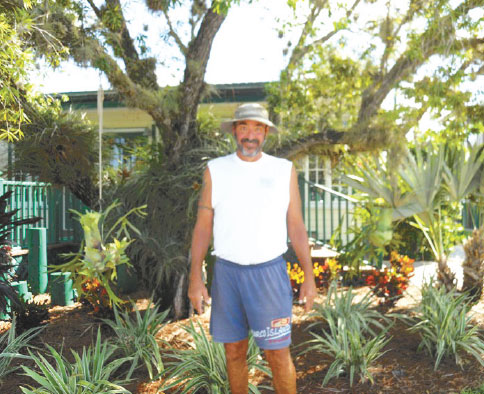 Sometimes we don’t dream of our next chapters, they just happen, don’t they?

Captain Bill Collier never dreamed his 1910 Doxsee cottage built on Marco and moved to Goodland in 1967 would be renovated and treasured in the 21st century. Why? Think about it. Clam diggers used to bunk in the attic.

Marciano Gizzi, a Chicago resident for many years, never dreamed he would be living in Goodland in this 1,400 square foot Old Florida cottage either. But he is and he loves it.

In Bill Collier’s time, clam harvesting and the Doxsee Clam Factory were a big deal on Marco. After many years the clam beds dried up and the cottage went into decline. At some point new owners in Goodland took great care to renovate it beautifully, but they eventually left town. Then, after a few renters, Goodland’s newbie, Giz, bought the historic gem.

For Giz, as he likes to be called, it has been time to learn about Goodland. I asked him to tell me some of the challenges he has faced. And he has had quite a few.

Landscaping was high on his list. “They told me not to put sod down in April because it was hot and dry and wouldn’t rain for days. Well, I got lucky – it rained that very night.” I’ll tell you though, I noticed him hand watering almost every day to get that sod to take. It looks fantastic now.

He found out about our no seeums the hard way. I guess we have 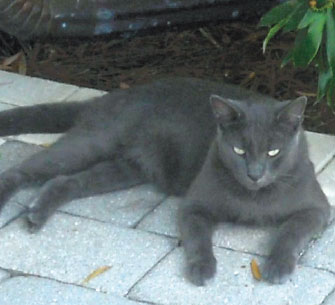 all learned not to roll down our car window on our curvy entrance road when the no seeums are flying around in droves. Slap, itch and more!

So Giz has settled in nicely to the Doxsee cottage. New pavers, fresh green paint on the outdoor shutters and the border fence, an herb and vegetable garden, flourishing tropical plants, a great boat dock and boat. For all his upgrades and projects he gave work to local people who needed it.

He also gave a continuing home to the soft charcoal cat who has lived at the cottage for a few years. Giz is building him a mini cottage and has named him Doxsee. If you look closely you can see Doxsee running around the yard and hopping up to the door for food and a good home. Is he lucky or what!?

I asked Giz what he learned about Goodland this summer while I was gone. He smiled, told me how wonderful the summer is here and then he said, “I learned that it is so quiet here. If you want noise, you have to make it yourself!”

Here’s what’s really cool though. Giz fits right in Goodland and so does his cottage. Interestingly, he didn’t bring much from Chicago except his great enthusiasm, his knowledge of construction, an optimistic outlook for a new chapter in his life and a happening attitude.

Joanie Fuller is the President of the Goodland Civic Association. She and her husband of 47 years, David Fuller, are residents of Goodland.