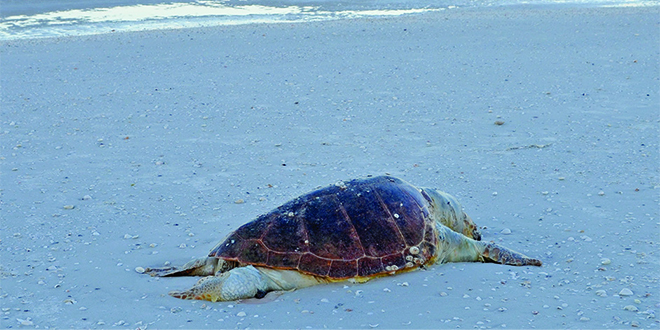 A dead loggerhead sea turtle washed up on Marco Island Beach on Saturday night, February 25th. Maura Krause, Principal Environmental Specialist for Collier County estimated the female loggerhead to be 30 years old. Even more depressing, this loggerhead was one of four sea turtles that washed up on Collier County beaches. Causes of death were not yet determined, but could be attributed to red tide or drowning in offshore fishing nets.

Loggerhead turtles can live for 50 years, and reach maturity around 35 years of age. The fact that three out of the four loggerhead turtles were female represents a significant loss in reproductive output. A mature female can lay four clutches during summer nesting season, each containing approximately 100 eggs. Had these three female loggerheads been able to live out the remainder of their years, they would have laid thousands eggs on our beaches for the next generation of this globally threatened species.