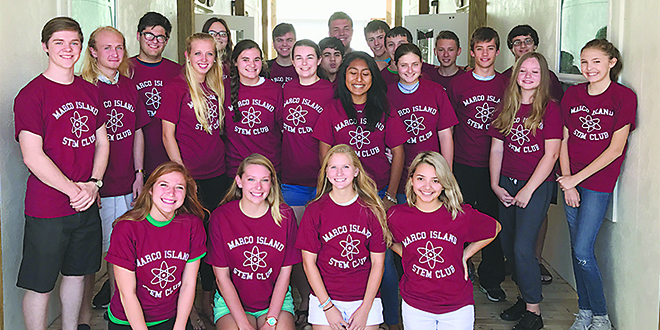 The competition is keen in Marco Island Academy’s classroom #201. Every Tuesday during their lunch hour, some of MIA’s most ambitious and committed students meet to greet and compete here. They are members of the STEM (Science, Technology, Engineering and Math) Club and are unapologetic about how they wish to spend the fullness of their years. They are the proof that the dream of MIA’s founder and chairman, Jane Watt, is reaching fruition way ahead of schedule, and, with a rush. Room 201 has turned into the proving ground and incubator for that growing number of students who want to be on the cutting edge of the sciences and technologies that will shape the world and beyond in the 21st century. These kids are serious. They are also having fun being serious.

Marco Island Academy opened its doors for business in 2011 with the premise that it would emphasize a STEM curriculum to prepare its students for successful careers in today’s fast moving technology driven society. “It’s part of our original mission statement,” says Watt, “to develop students who lead the country into the 21st century. U.S. companies have been pulling students in from other countries to fill top level engineering jobs. It’s time we started producing them here at home.” Almost from the beginning the school started attracting students who wanted to benefit from this curriculum. Two years later one of these students, Dylan Demkovich, founded STEM Masters, which brought in over a dozen speakers and in 2014, also founded the STEM Club. (See “MIA Senior Shoots for the Stars,” in the March 31 edition of the Coastal Breeze News.) “I noticed that the same group of students kept showing up for STEM Masters activities,” Dylan said, “I felt we should have a forum for these students to discuss what we had learned and to plan our own activities.” STEM Clubs had been popping up at select schools, mostly in Florida. The clubs have been characterized as “any out-of-timetable session that gives school students the chance to explore aspects of science, technology, engineering and math.” That’s how these kids spend their lunch hour every Tuesday. It is the highlight of their week.

The students gushed when asked why they come to meetings:

“I’d give [lunch] up every day to be a part of the STEM program. I am so grateful I’m able to be so involved in this club. It’s truly an incomparable experience.”

– And, “The best part about STEM club is that it’s a hands-on experience. Our club tries to take what you learn in class and apply it to projects and experiments.” This student recalled a club experiment, wherein students were able to cut through aluminum with a piece of lead, cords, and a battery. “As an aspiring engineer,” he said, “it was more beneficial to see how it was done than just reading about it.”

– And, “Sometimes you never know what we will be doing in STEM. We come and enjoy the fun, experiments, and the company.”

– And this from a freshman, “It is important to me, because it will help me in college and when I am a doctor. STEM defines who I am. It gives me a purpose.”

The officers of the group plan the activities each week.

The club is a mix of the curious and committed. For many, their goals in life have already been set. They include chemical engineer, aeronautical engineer, physician, pediatrician, lawyer, FBI agent, astrophysicist, neuropsychologist, and U.S. Air Force 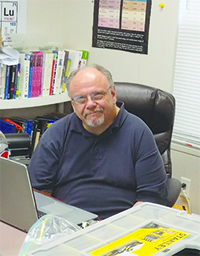 STEM Club faculty advisor, Frank Wood is happy with the way the club is being run.

technologist. It is an eclectic mix of boys and girls, academic standouts and star athletes, and those inclined to civic service. They draw inspiration and encouragement from each other.

The day I was there, four teams were involved in a sometimes hilarious competition to see who could, in 25 minutes, build the highest tower out of uncooked spaghetti and top it with a marshmallow. It was amazing what the kids could do with this medium. The winner was an astounding 88-centimeter (35”) high (albeit slightly wobbly) tower. The prize was a bag of marshmallows. Keeping a benevolent eye on all this, between gulps of his lunch, but saying little, was Frank Wood, the ex-superintendent mining engineer, hired in September to become the force majeure in MIA’s burgeoning STEM curriculum. In the seven months he has been here, he has put sizzle into STEM. “The kids develop their own projects,” Wood says, “That’s what they do. I don’t interfere with that. Sometimes they even amaze me.” The next week, the club took part assisting the engineering class in the building of submersible robots.

The materials used in their weekly meetings are purchased with funds from the club’s treasury, made up of members’ dues and fundraisers which they have put on. Last summer, they designed and had purchased STEM Club t-shirts, which they sold to the members for $15. MIA’s students sometimes feel as if they are being nickel and dimed to death to support their various activities. The STEM clubbers feel no differently, but surmise they are getting their nickels and dimes worth from the club. “We are hoping that a local business or organization will sponsor us,” says club president Vincent Piranio, “It would take a lot of the pressure off and allow us to concentrate more fully on our projects and experiments.” Transportation costs to events (such as robot competitions, and the Kennedy Space Center) are the biggest items of concern for which fundraisers have also been held.

This year, the club incorporated the Tech Club or Tech Tutors as another section of the STEM Club. (See “MIA Students offer to help” in the 10/15/16 edition of the Coastal Breeze News.)

“Several of our members attend this event on Wednesdays after school to help people from the island with their technological struggles,” says Piranio, who attends every session himself, “They also work on any issues or updates on the laptops of faculty and staff at MIA. It gives them volunteer hours they need to graduate, as well.” Piranio also notes that if a sponsor would help with funding, the club could give even more back to the community. “The STEM club has a lot to offer to our school and community and the will to do it,” he says, “All we need is some relief from the constant fundraising which takes up so much of our time.”

The club officers, who do all the planning for club projects and fundraisers are: Vincent Piranio (who just replaced Dylan Demkovich, graduating this spring) President; William Konkus, Vice President; Danya Zarate, Secretary, Teagan Havemeier, Co-secretary; and Olivia Watt, Treasurer. Danya does the heavy lifting for the officers. I have never received better cooperation. Despite being immersed in the interminable spring tests, preparation for a robot competition, after school activities, and part time jobs, this group of kids gave me arguably, the best and most comprehensive responses I have ever gotten. They are a remarkable group and you will be reading about some of them in the not too distant future, wherever they may be.