Whatever you do, don’t call me a pig! 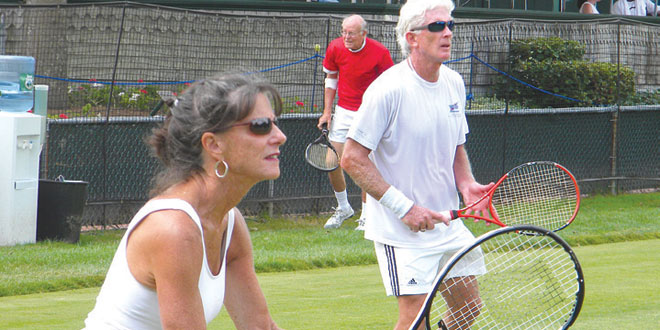 Here is the question of the day: In the game of doubles, is it ok to cross the middle line and take your partner’s ball? However, before we attempt to answer this delicate question, doubles partners must communicate before they go to battle. Remember, a doubles partnership is no different than a marriage.

It doesn’t take a genius to know that to enjoy your marriage, it is essential to communicate well and flourish. Conversely, if couples avoid the important topics, it is only a question of time when it will blow up in their face, right? So, if one wishes to play in some cutthroat tournaments, teams must sit down and discuss their strategy or suffer the consequences. Before my wife and I ever competed in USTA Florida tournaments, we took the time and hashed out our plan. I was fully aware of what would 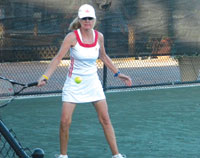 lie ahead; Florida tennis features so many former great collegiate players and outstanding club professionals. Therefore, if Leslie and I wanted to be successful, we needed to have a plan.

Uncharacteristically, I took a very mature approach for a young twenty-something year old man. Knowing full well that I was a classic serve and volley tennis player (my generation) and that her style was 180 degrees different, (steady baseliner who only comes to net to shake hands) I made sure to let her do her thing. In other words, I was not dumb enough to try to change my partner! So, we did some innovative strategies: We always played the Australian formation when she served to the Ad. Court and then she would often lob the rushing male player as he ventured too close to the net.

When I was serving, she did not play too close to

If one player is farther back, it is still acceptable to cut in front if that player is faster.

the net (comfort) and we knew they would lob and then I switched to hit every overhead smash. Now, we had one more key that worked like magic; if we were both at the net, she preferred that I cross-over and take her ball so we could end the point. Yes, she wanted me to move diagonally forward to meet the ball at its peak and bash the volley for a winner. If we count USTA husband-wife, mixed doubles, money tournaments and exhibitions, were finished our career with a 50-0 record. So, I feel that we are in good position to help coach husband-wife and mixed doubles contenders.

One of my bigger challenges as a coach is explaining to my students that a person who is more aggressive and effective is not a pig when he gets to the ball quicker than his partner. In other words,

It is not hogging if you are quicker to the ball.

the unaggressive player is the one at fault when he complains that his partner has stolen his shot. Yes, the person who has slow feet is the first one to complain about a partner ‘hogging’ his ball. When is it wrong to intercept a ball intended for your partner?

It is wrong to be over aggressive in a non-competitive club mixer. In this particular scenario, we want to encourage the lesser player to grow and improve; it is wise to relax and enjoy and not worry about winning. I’m frustrated when I hear “oink, oink,” as people describe a certain tennis player. Of course, their reference is all about the guy who dashes for the ball and poaches the volley as their partner stares in defiance. As I stated earlier, it is a good tactic to poach and easily win the point. It is actually poor form 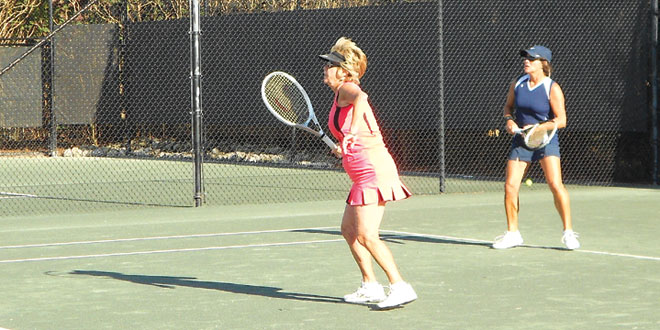 We encourage our partners to move quickly forward.

to lay back and let the ball come to the player. If one plays at a high-level in any sport and is aggressive, that team will usually prevail. Personally, we can draw this parallel in life; “the early bird gets the worm.”

As it has been said many times, good luck occurs to those who create their own good fortune through hard work. If one is playing competitive tennis, it is vital to move well past the so-called middle line and retrieve the ball and try to win the point. Let me know how you feel about this topic by emailing me at dbrowne912@aol.com. Good luck.