What will it take to be Marco Island’s new city manager? 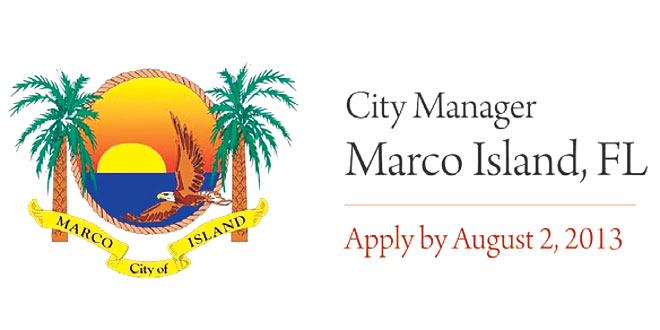 The deadline has come and gone, and the resumes are in to fill the position of Marco Island city manager.

As of D-day, Friday, Aug. 2, more than 100 interested parties had responded to ads posted by the city’s executive recruiting firm, Colin Baenziger & Associates, for the soon-to-be-vacant position of city manager. Current City Manager Jim Riviere is set to retire next month, and the new city manager could be in position by November.

Colin Baenziger, the firm’s owner, is pleased with the results. “I am also comfortable, based on the candidates I have spoken with, that we will have a very strong field to work with,” he told city councilors in a recent email.

According to the brochure posted with the ads, though, whoever takes the city manager job has his or her work cut out for them at an annual salary between $125,000-$165,000. The eight-page brochure was a collaborative effort between the Marco Island City Council and Baenziger, and it outlines in detail the challenges and expectations waiting for the next Marco Island city manager.

The crux of the brochure is a simple premise: “The ideal candidate will understand politics but not participate in them. Instead, he or she will act as an advisor and focus on helping the council make Marco Island a better place to live, work and play.”

Reading through the brochure reveals that this may be easier said than done. Here is how the brochure describes the city council: “The council members are all very bright and successful in their own right, serving because they truly want to make Marco Island a better place. Generally, they are fiscally conservative but not afraid to spend money when it can be definitively demonstrated it will benefit the community. They do disagree — sometimes strongly — and discussions can sometimes get a little testy, but the councilors are always respectful of each other. They are analytical, ask good questions and are data-driven. Staff members working for this group know they should come prepared.”

It also outlines four main challenges for the candidates. First are the competing interests of resident groups on the island who seem to have divergent visions for the future. “As a relatively young community that has grown rapidly, it is still seeking its identity,” the brochure reads. “The community needs to create a vision that the island’s disparate groups can rally around.”

The second challenge is restoring community trust, referring to Marco Island’s checkered past in the city manager position. The brochure sums it up this way: “(A)lthough the city currently has a strong staff, the community’s trust in the city government is not what it could be. Prior 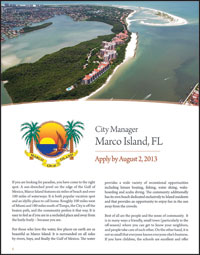 city managers have not always communicated well with the elected officials and the public. Mistakes have been made…The next city manager will need to play a leading role in restoring the public’s confidence in the government.”

Third is a focus on fiscal responsibility: “(T)he City government is financially strong and has already done a great deal to reduce costs. Still, some wonder if more can be done. The next manager will be expected to review the operations and determine if the right levels of service are being provided and if additional efficiencies can be achieved. It is also possible that resources could be better allocated.”

Finally, there is the water utility: “With about a third of the city’s employees being in the Utility, the next manager will want to take a tough, hard look at both its operations and the rate structure. City Council is looking for strong experience in this area.”

With these challenges facing likely candidates, the simple premise of understanding politics but not participating in them takes on a new meaning. According to the brochure, “The ideal candidate will be a leader who is honest and ethical, one who inspires confidence and has a very professional demeanor. The individual will also know how to build relationships with council members in order to foster unity and cohesion at all levels of municipal government. He or she will be responsive, value transparency and work diligently to insure the elected officials and the community are all well informed…At the same time he or she will have a strong sense of self and not be afraid to say “no” or push back when that answer is in the best interests of the community.”

When it comes to evaluating the candidates, Baenziger says education and experience top the requirement charts. “The city manager position is unlike any other,” explains Baenziger. “The individual works, in this case, for seven individuals who have different points of view, needs and priorities. A successful city manager will be able to relate to all of them, provide the information they need, and work to accomplish their priorities.”

“It is not a job everyone can do,” he adds. “Many brilliant and very well educated people fail as city managers.”

What about the professional city manager’s certification that a number of the city councilors felt would be so important to this process? Baenziger says experience will trump this certification every time.