“What were you thinking?” 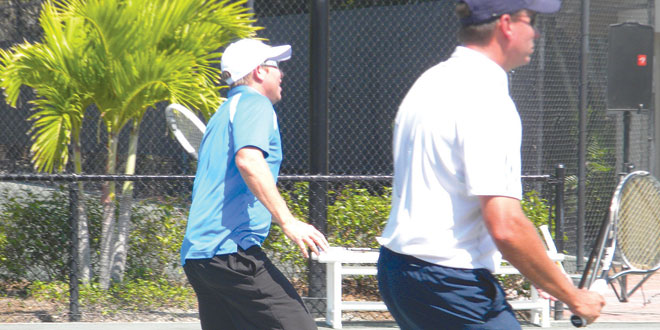 We all know what happens when we assume something, right?

Just last week, my tennis ladies kidded me about something I always say to them when we practice each Wednesday morning. We constantly work on doubles strategy, and too often I am perplexed on their shot selection during a drill session.

Typically, at the end of a puzzling shot, I inquire, “What were you thinking when you hit that shot?”

“Doug, you are assuming that I ever think,” one of my ladies remarked with laughter.

After each team practice, I always huddle up with my staff to discuss our latest clinic with our various teams. “Doug, it’s normal for us to hit the ball in the proper areas because we’ve been doing this forever,” Tad offered to me. “Even though our players are improving their strokes and their strategy, it is not as natural for them,” Tad continued with his astute observations.

Ironically, most top-flight tennis professionals have always understood smart tactics; many recall building a solid plan going back to the early junior tennis days. In my case, I vividly remember winning the 10-and-under club championships (The Milwaukee Town Club) as I hit ball after ball to his weaker one-handed backhand.

So, when I became a full-time tennis coach at the tender age of 22, I had to seek out information from my new students. In order to get a good grip on this point, I have been known to ask a lot of questions. It is my goal to dig deep into my pupil’s minds so I can clearly understand what they are thinking or not thinking on a certain point.

By far the biggest weakness a pro might have is to coach all of their students to emulate his style. In other words, numerous male tennis pros have the ability to serve and volley as well as rip a forehand drive and close into the net. Believe it or not, there was a pro who taught every ladies team to serve and volley, and in particular, his 2.5 ladies team struggled to

Even though I have been blessed to coach many talented juniors, I can count on one hand the number of kids who effectively served and volleyed. Without a doubt, the serve and volley technique is a dying art and should not be stressed with people who are not equipped to do so.

Most CTA/USTA league matches are played on a slow surface, and with our un-usually humid weather, it behooves players to develop excellent ground-strokes. When the service returner has the edge, it is not wise to come forward and try to salvage a volley.

One of the most difficult shots in the game of tennis is the overhead smash. Therefore, when a doubles team moves forward to the net, it is smart to throw up a lob. Unless one is competing against Pete Sampras or Serena Williams, lobbing is a great way to stay in a point or to win a point with a carefully constructed offensive lob.

The best way to improve your shot selection is to play as many meaningful matches as possible and that includes practice. The key is to make every practice session as tension-filled as possible; be creative and always keep score.

If a team is dominating, change the scoring rules. Don’t be afraid to experiment; give one team a 5-0 lead when playing to 10. It is a different ballgame when a team is no longer winning. Coming from behind is far different than being the front-runner. Case in point: Tiger Woods, the current player of the year on the PGA Tour. Tiger has NEVER won a major when he was not leading going into the last round.

In summary, if one wishes to develop as a match player, set up as many different situations as possible to improve your on-court strategy.

Doug Browne is the Hideaway Beach Tennis Director and the new Collier County USPTA Pro of the Year. Additionally, Doug has been the International Hall of Fame Director of Tennis this past summer. Doug has been writing a tennis col-umn for the past fifteen years and welcomes your feedback.