What to do with the road to Goodland? 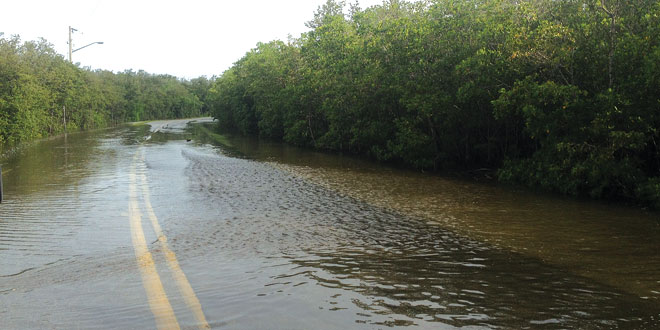 Residents of Goodland may have gained some ground in their decade-long debate with the City of Marco Island about the drainage problems on Goodland Road (SR-92A) — drainage problems that lead to flooding along and over the “at-grade” roadway on a regular basis.

Although no money was appropriated or plans approved, it was clear at a recent Marco Island City Council meeting that a consensus is forming and all parties are in agreement that improvements are necessary not only for the roadway but also for the future health of the mangrove forest and preserve area in which it sits. Thanks to an interlocal agreement with Collier County, Marco Island is the steward of the .7-mile stretch of road, and has spent $203,351 on maintenance and repairs since 2004.

“We have actually had good and productive meetings between all interested parties,” explained Nicole Johnson, director of governmental relations for The Conservancy of Southwest Florida. “We met out on (Goodland Road), and our mangrove biologist made a suggestion that you can take a look at doing some improvements, but first we have to do a hydrologic study. We have to see how the water is flowing underneath the road.”

In fact, Johnson continued, the city’s Environmental Specialist Nancy Richie asked The Conservancy to prepare a scope of work and quote for a project to sink wells along the road to study the water flow under the road and its small bridge. The estimated price tag: $13,000. “We want to work with everyone here, and we do believe that there are alternatives out there,” she said to the council. “We have to study the water and see what is happening and go from there.

Johnson was speaking in response to a presentation made to the Marco Island City Council in September by Mike Barbush, a member of the Goodland Civic Association and chairman of the Goodland Road Committee. He has petitioned Marco Island officials twice this year to move forward with the seven-year-old plan to elevate the Goodland Road by 1.5 feet in all areas and add some drainage structures. Currently, the city has a 30 percent complete design plan for this project.

During his most recent appearance, Barbush asked the city to appropriate funds — between $150,000 to $170,000 — for an engineering study to begin the road and bridge project. “We know it is onerous, but we feel our health and safety are compromised out in Goodland without this road,” Barbush told the city council.

However, this plan has been dogged by two big hurdles from the very beginning, and they resurfaced during the city council meeting. First is the price tag which is $1.7 million and is based on building estimates conducted in 2009. “I am not going to stand by that estimate in any way, shape or form,” Marco Island Public Works Director TIm Pinter emphatically said to councilors during Barbush’s presentation. In fact, Pinter determined that the engineering study and plan design for the road

Improving tidal flow beneath the Goodland Road bridge could be a start to fixing the flooding issue. PHOTOS BY NATALIE STROM

The second problem is the mangrove forest through which the road winds. As it stands, the plan requires the removal of some mangroves and surrounding vegetation, and that is a no-no. The mangroves are protected by the original Deltona Settlement Agreement, a vital legal document governing development of thousands of acres of environmentally sensitive lands, wetlands and mangrove forest in and around Marco Island since 1982. Johnson appeared before the Marco Island City Council on behalf of the five environmental signatories of the agreement: The Conservancy of Southwest Florida, National Audubon Society, Audubon of Florida, the Issac Walton League and Environmental Defense.

“Per the settlement, cutting, damaging or destroying those mangroves simply is not allowed,” Johnson noted. “The Conservancy isn’t seeing this as people vs. safety or mangroves vs. making sure that you have a safe road. You have to do this consistent with the agreement, and the design that Goodland is supporting is inconsistent with the agreement.”

More work to be done

Still, both sides agree there is room for compromise. While he initially asked for the “whole enchilada,” Barbush conceded that Goodland residents want to work with the city and environmental groups on fixing the road. “It is not going away for us down there. The tide continues to rise, and we need to do something about this,” he added.

According to wetland experts, Johnson’s suggestion of a hydrologic study only would be the beginning. Robin Lewis, president of Coastal Resources Group Inc., has been working on mangrove restoration issues in Southwest Florida for eight years. He did not attend the recent Marco Island City Council meeting, but his group has suggested a full analysis of the issues involved with mangrove restoration to both the city and the Rookery Bay National Estuarine Research Reserve.

While Lewis agreed that improving the water flow under the road and its small bridge will help the flooding issues, he was not certain it would solve all of the problems. Lewis pointed out that the water flow is further compromised by sand, which has moved south along the shoreline gradually blocking the normal tidal connection with the open waters around Goodland. Mangroves are colonizing that sand and making tidal exchange and drainage even more difficult.

“Sea level is rising, and the road is going under water more often due to that and other issues with drainage of the mangrove forest west of the road,” Lewis added.

The key to making it all work, he noted, is more study — and a lot of it — but that also comes with a hefty price tag. He guesses that a solid study of the problems would cost about $100,000. “It would take more than just a hydrologic study to answer the questions,” stated Lewis. “(W)ith that and the other required work, I am guessing it would take a year to do all the studies… Water flows and road blockages and the future of the mangroves around Goodland are the issues. It is all about hydrology.”