What (or who) is invading our waterways? 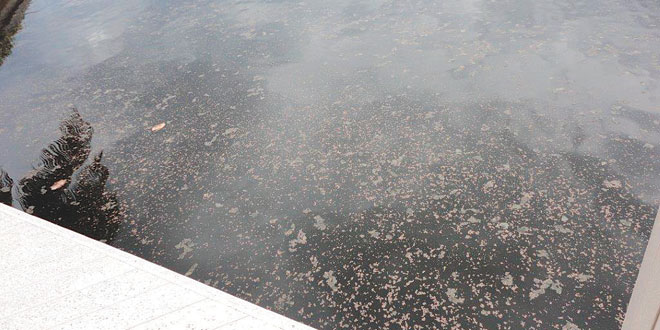 As the local news brings us horror stories of the green slime and natural disasters invading the waterways of cities just north of us, we may wonder if we have any need for concern. You bet we do, only its cause here on Marco Island is not the opening of dams in Lake Okeechobee, but something more local and quite sinister: a sawdust-like residue from the cutting of ‘Fiberon’ decking, a composite material made up of recycled and reclaimed wood and plastic. According to the manufacturer, the wood particles can be anything from sawdust, wood chips, and wood fiber pieces. The plastic components can be either virgin or recycled plastic materials. Because of the use of recycled or recovered materials in the manufacturing process, composite decks are considered a more environmentally friendly product for deck building.

Obviously ‘Fiberon’ itself is not the real culprit, as its “environmentally friendly” characteristic does not extend to its being reduced to sawdust and shavings and have its resulting dust and debris blown into a canal, as witnessed by the neighbors of 410 Battersea Court. The vigilant neighbors not only reported this action to Code Compliance at City Hall, but also took some very revealing photos, showing the surface of the water covered with the polluting film.

Responding to the call, code enforcement officers cited Duane Thomas Marine Construction whose workers had been sawing boards over the canal and allowing the composite shavings to fall into the water, literally covering the surface. No effort was made to use a dust catcher or any other bagging device to hold the dust and shavings.

The waste sticks on seawalls, piles, and boat hulls and some particles are small enough for fish and other sea creatures to ingest. There is scientific data that shows plastic will not decompose in our lifetime and as shavings, is very hazardous to marine life if ingested. The larger chips could choke and foul marine life. There are many studies done by the American Chemical Society (ACS) on plastic decomposing in the ocean that now show, “plastics – reputed to be virtually indestructible – decompose with surprising speed and release potentially toxic substances in the water,” toxic components that leach into the food web.

A repeat offender of Marco’s code regulations, Thomas was on the agenda to appear before the Code Enforcement Board at its August 13th meeting for this infraction as well as one for “Public Safety” concerning a property on Briarwood Court. Mysteriously, it was announced that both of these cases were “in compliance” and not one of the six board members present asked for clarification. After the tide carried some of this man-made detritus toward the open water, how was it brought “into compliance”? — by some kind of magic wet Shop-Vac?

In an email dated August 6th, Dana Moller, the State’s Environmental Specialist details that “—the neighbors stated that the contractor used a leaf blower to push plastic ‘Fiberon’ cut decking material into the water, which extended the entire length of the man-made canal. They also stated that a white-colored turbidity bloom filled the canal from when last week’s heavy rain expelled upland fill material from the new seawall. The silt fencing for the upland construction of the home is only partially in place and there appears 57 LF left of plastic decking material over the water ready to be cut.” Moller responded by offering to share both information and remedies for these infractions with the Code Board and Thomas, and suggested a letter to Thomas “emphasizing the use of BMPs (Best Management Practices) and corrective actions for upholding water quality standards” be issued. The email notes “…it appears he has a long history of violating various laws.” In fact, a Compliance Assistance letter was issued by that office as suggested on August 14th.

Neighbors who were interviewed were visibly upset with the non-productive code meeting. Preferring to remain anonymous as they “fear repercussions,” they spoke openly however, about their observations and experience. They had gone to the meeting expecting to face the board, but when the cases were quickly dismissed as being “in compliance” and no one objected, they were stunned and did not understand that they possibly could have spoken out at that time.

They had observed Thomas’ company once again working on the dock before the weekend (August 9) and, “We assumed it was a done deal. He knew he could go ahead and do what he wanted and when he didn’t show up for the meeting, we were sure of it. It was all settled ahead of time.”

One family said they have the same kind of material in their dock and that it was installed in a very safe manner. They said they are good caretakers of their canal and have fabricated special tools to remove anything they find floating in it.

“It hurts,” they said, “that in two days he (Thomas) can ruin what we have protected for years.”

This is a terrible thing and we are very upset,” they said. “Why does the city continue to give him permits to work?”

“Plastic will come back to haunt you,” they said. “Each time the tide comes in, the plastic bits still come back.”

As other estuaries and coastal communities such as Indian River Lagoon, Cape Coral, and Pine Island Sound are helplessly watching and experiencing the collapse of their ecosystems, Marco Island has an opportunity to be pro-active and use all of its resources to guard against needless pollution of backyard waterways.