What is the Problem with Palm Oil? 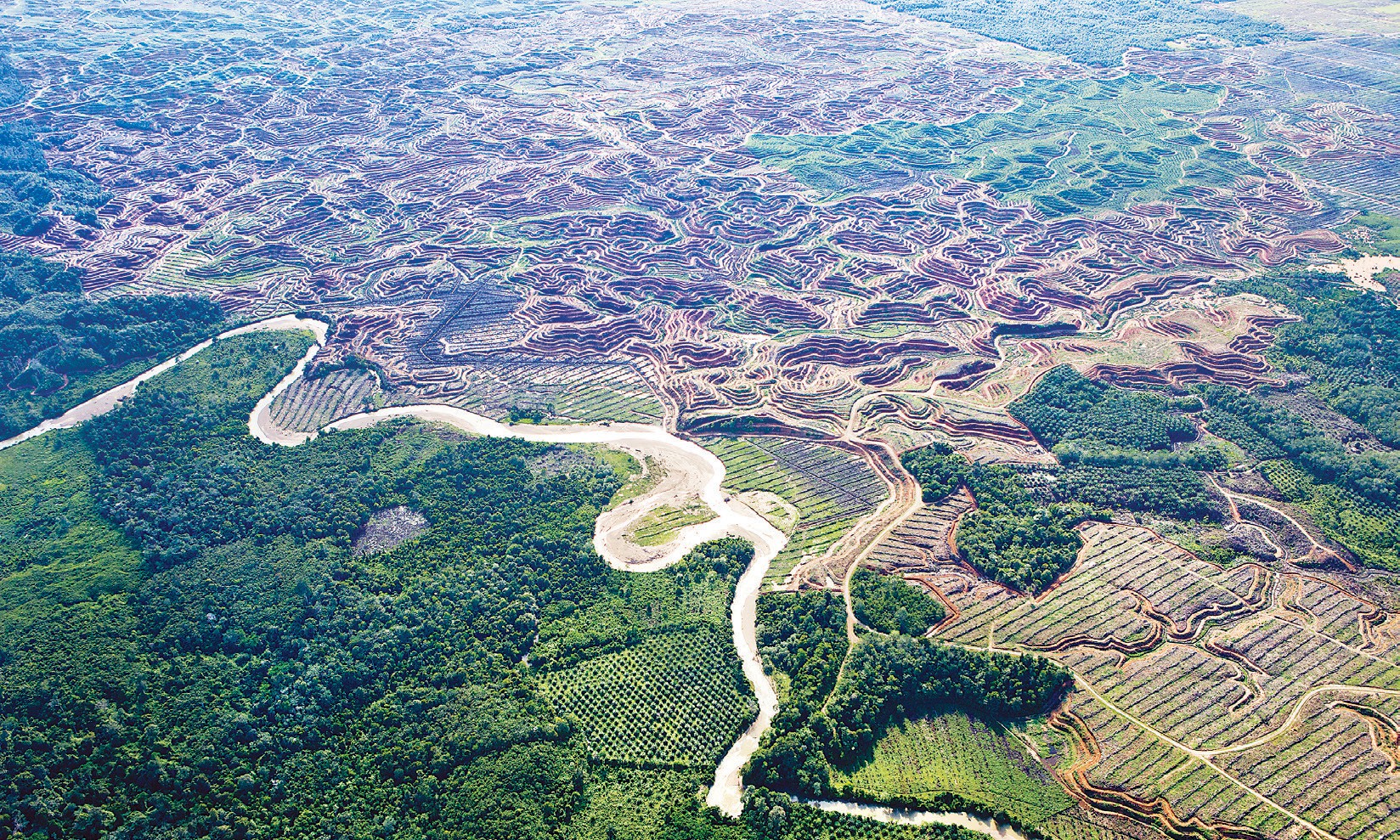 Palm oil is an ingredient in numerous products we consume every single day; whether it be a bag of chips or your favorite cookies or candy bars. Palm oil is used in your body lotion, shampoo, toothpaste, and even cosmetics. It is so versatile it is used in baked goods and processed foods, too. It is also used in paints, lubricants and livestock feed. It is found in over half of the products in any grocery store!

There are two types 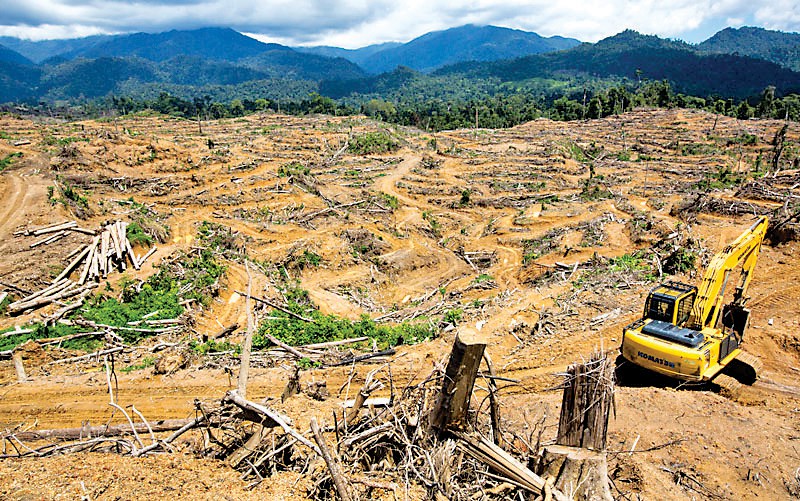 Widespread deforestation’s affect on the landscape can seen in the above photo, and it’s massive impact more clearly in the above right aerial photo.

of oil produced by the palm fruit. One is palm oil and the other, palm kernel oil. Amazingly, “palm oil” goes by two hundred different names, including the generic all-inclusive “vegetable oil,” yet it all comes from one plant. It’s cheap, versatile, easy to process and it is in a vast majority of products we use every day. So, what is the problem with palm oil?

Nothing is ever as good as it may seem; as is the case here, there is a downside 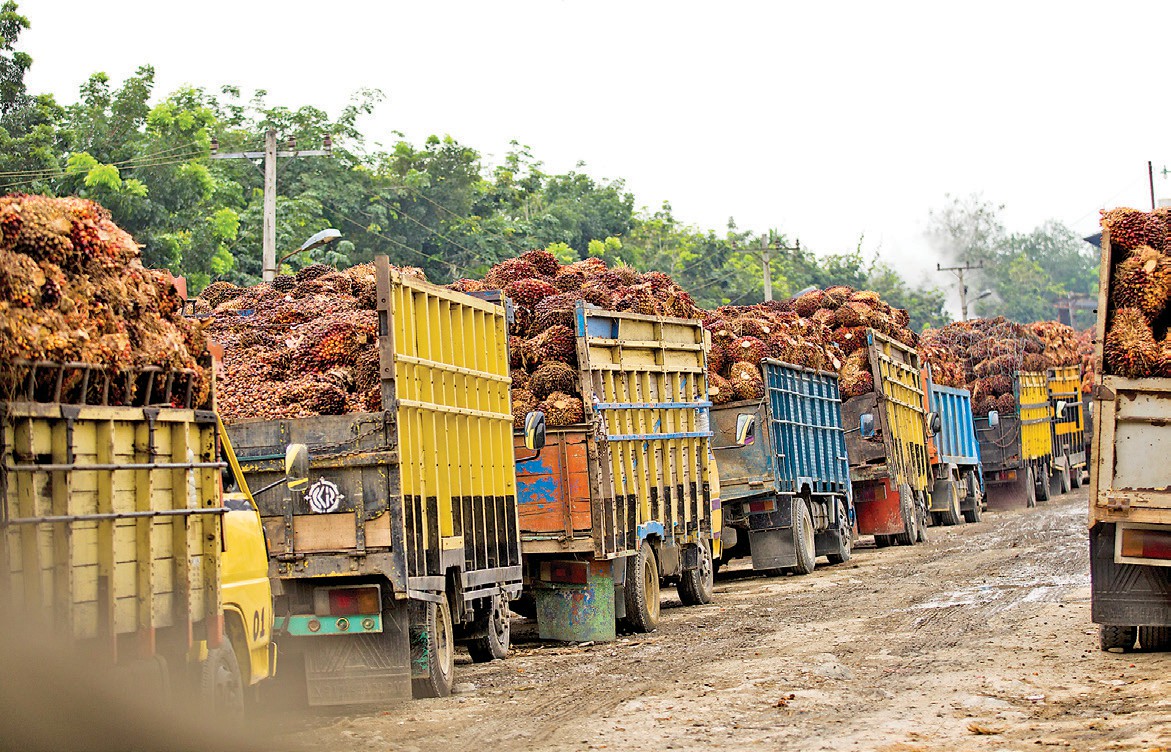 Trucks line up with the fruit of palm oil plants ready for the processing factory.

to the high demand. The problem in a nutshell is increased demand for palm oil is the cause of rampant deforestation of vital tropical rainforest, ultimately harming critical native wildlife. Palm oil is an inexpensive option for manufacturers and offers financial gains to those involved with its production. That should be good, right? Not if left unchecked! Companies use questionable techniques or methods to gain control of land, harvest its timber and plant palm oil. Deforestation especially, completely alters the ecosystem and contributes

Elephants shot, poisoned, electrocuted or burned, seemingly acceptable to villagers who consider them a nuisance.

to the staggering loss of wildlife. The biodiversity in the tropical rainforest that once was will never be replaced. Such is the case in Sumatra, Indonesia, in the heart of the palm oil capital of the world. Critically endangered wildlife is dying. The primary method of clearing the land to plant palm plantations is slash and burn. It has become the way of everyday life in Sumatra, which is deemed, “The Country on Fire.” It is wiping out habitat for endangered species at 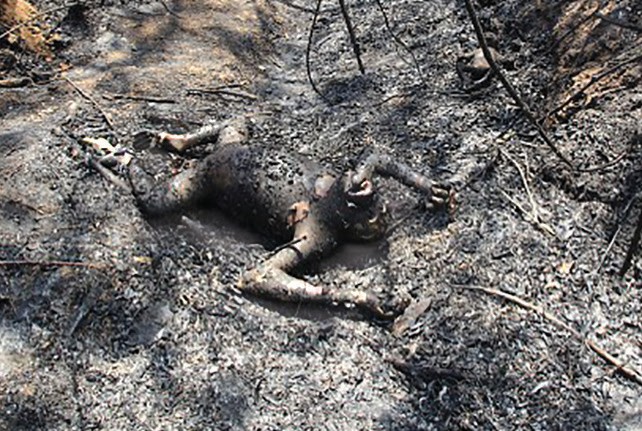 Three female orangutans all from the same family (two adults about 20 years old with a one-year-old infant) burned to death.

Often farmers consider animals a nuisance; they’re poisoned, shot or electrocuted to make clearing the land easier or to prevent harm to the cash crops. Timber companies cut the wood, what’s left is set on fire. Animals such as the orangutan, with 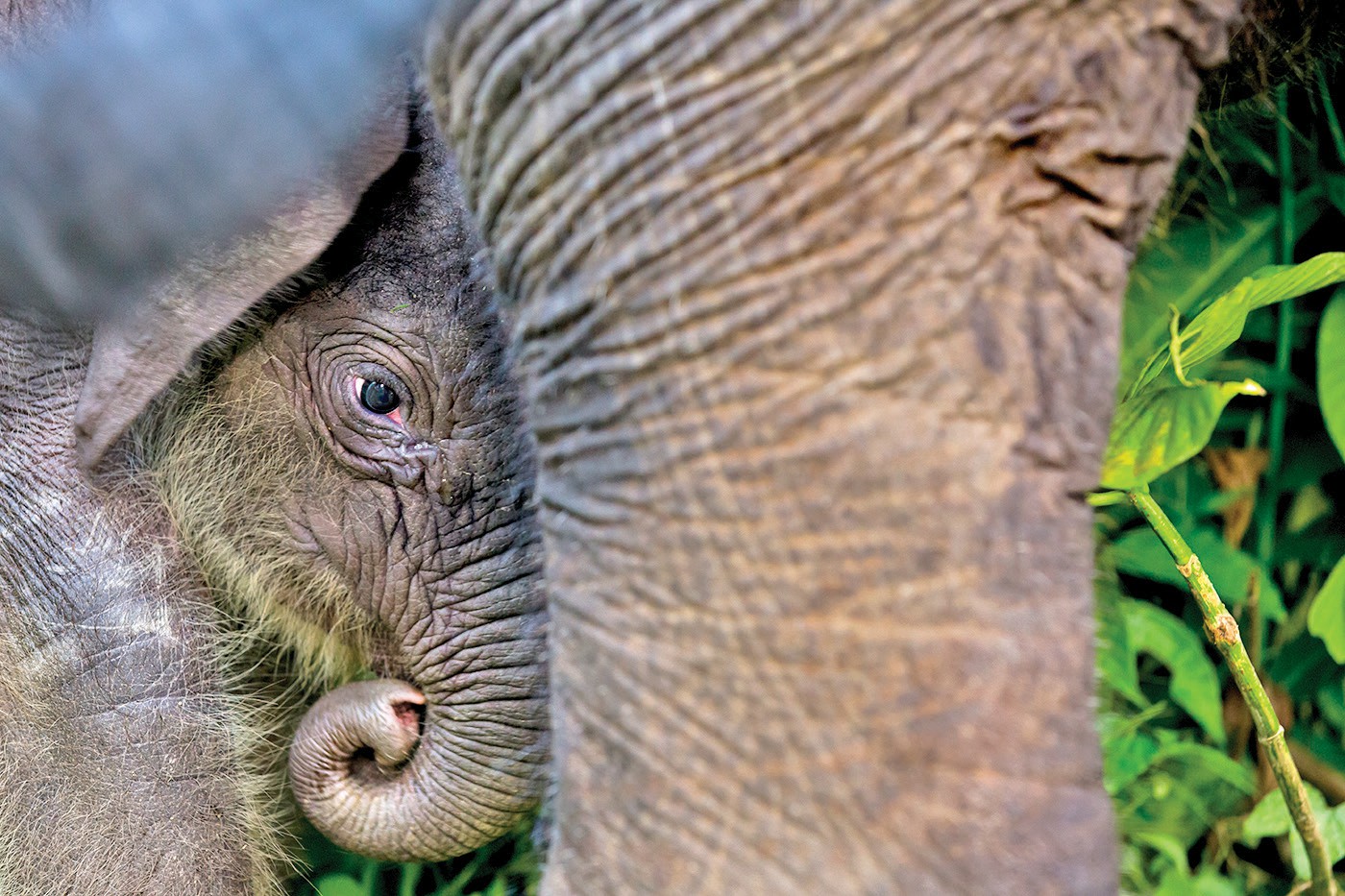 Sumatran elephants, Sumatran rhinoceros, and far right Sumatran tigers; each of these species is critically endangered.

their habitat in the trees and nowhere to flee, are lost in the fire. When palm is planted, any wildlife looking for a safe place to escape the blaze are killed by farmers or plantation owners who consider them pests. Finally, younger, orphaned animals can’t fend for themselves and die off or are captured and sold. In the United States, we protect our critical wildlife and lands. In Florida specifically, the mangroves, which are important to the balance of our ecosystem and protect 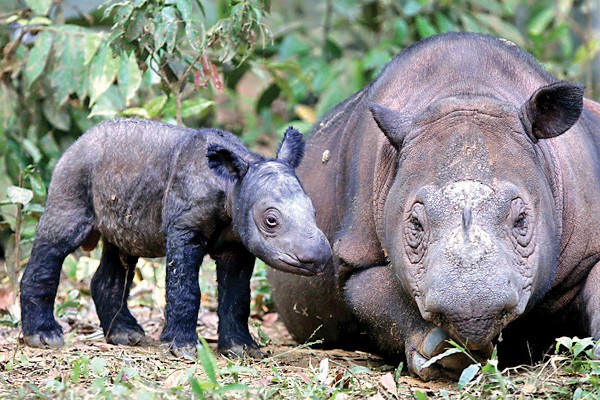 our coastline during hurricanes, are protected. We also have protections and monitoring systems in place for local wildlife such as turtles, manatees, panthers, and other native wildlife with some notable successes for the effort. Without such efforts, the rare and critically endangered species in the rainforests of Indonesia will most likely become extinct in our lifetime. Many of us don’t want that to happen, we care about wildlife. We want the orangutan, elephant, rhinoceros, tigers, and the other animals of Sumatra to survive 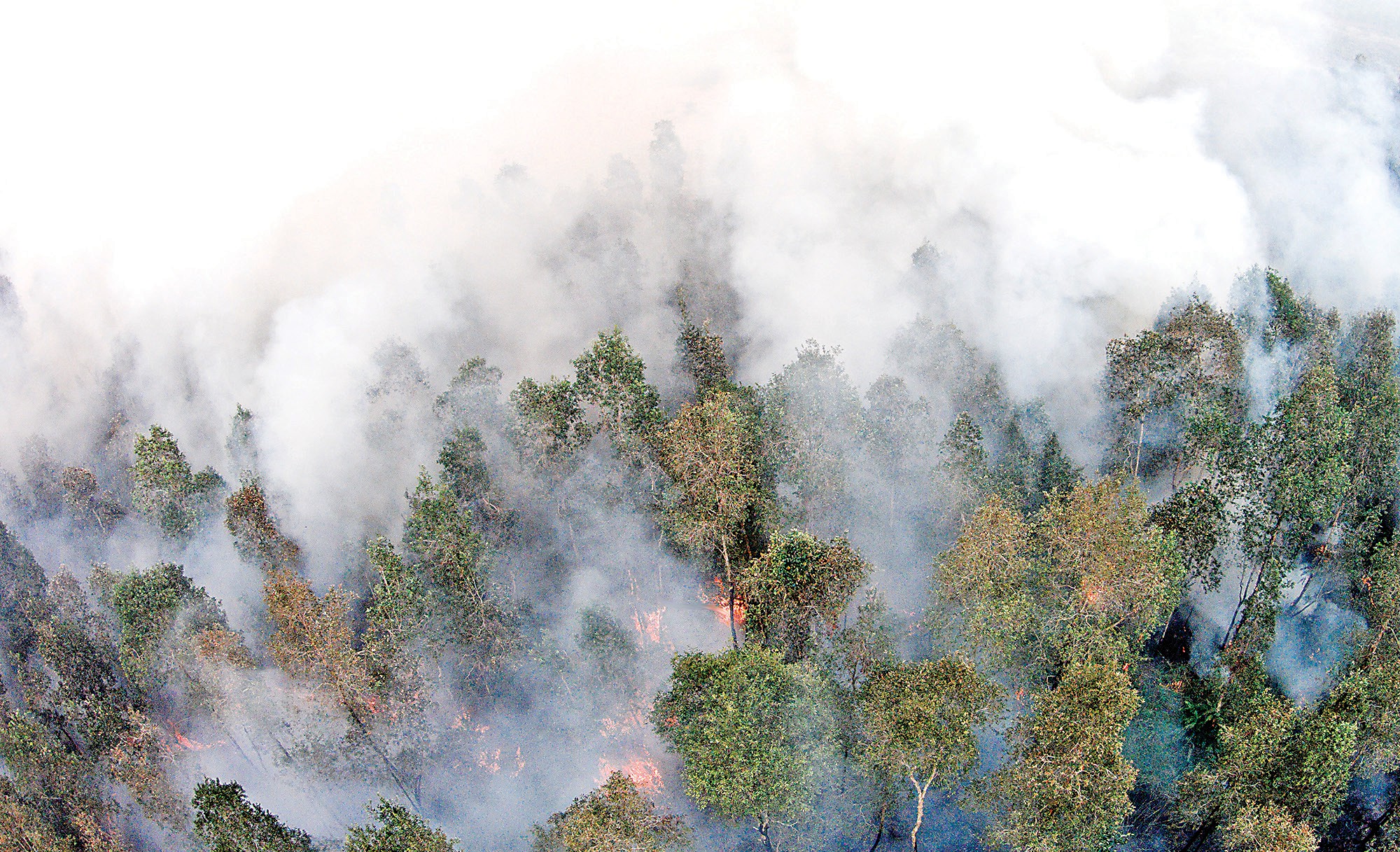 and live in their natural surroundings.

Many people have no idea what is in the products they consume daily unless they’re reading labels for the sodium, sugar or fat content for health reasons, or looking for allergens such as nuts or eggs. The majority of consumers are unaware of the dire consequences products containing palm oil are putting these rare animals in. We don’t think in those terms when at the grocery store. Manufacturers have little to no incentive to spend more on humane 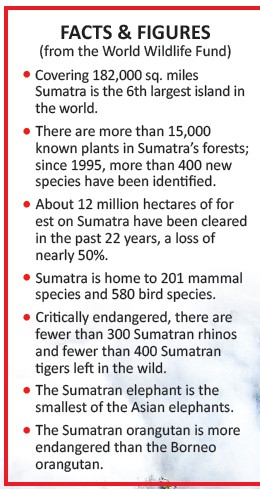 or ethical sources of palm oil. What can we do? We can speak up to let manufacturers know that we want them to use certified palm oil. Certified palm oil comes from plantations pledged to using methods of farming that sustain the forest and its wildlife. It is so easy to put it out of your mind when you walk in the grocery store, feeling complacent and helpless to effect change. But you can create change. Let companies know you’d prefer 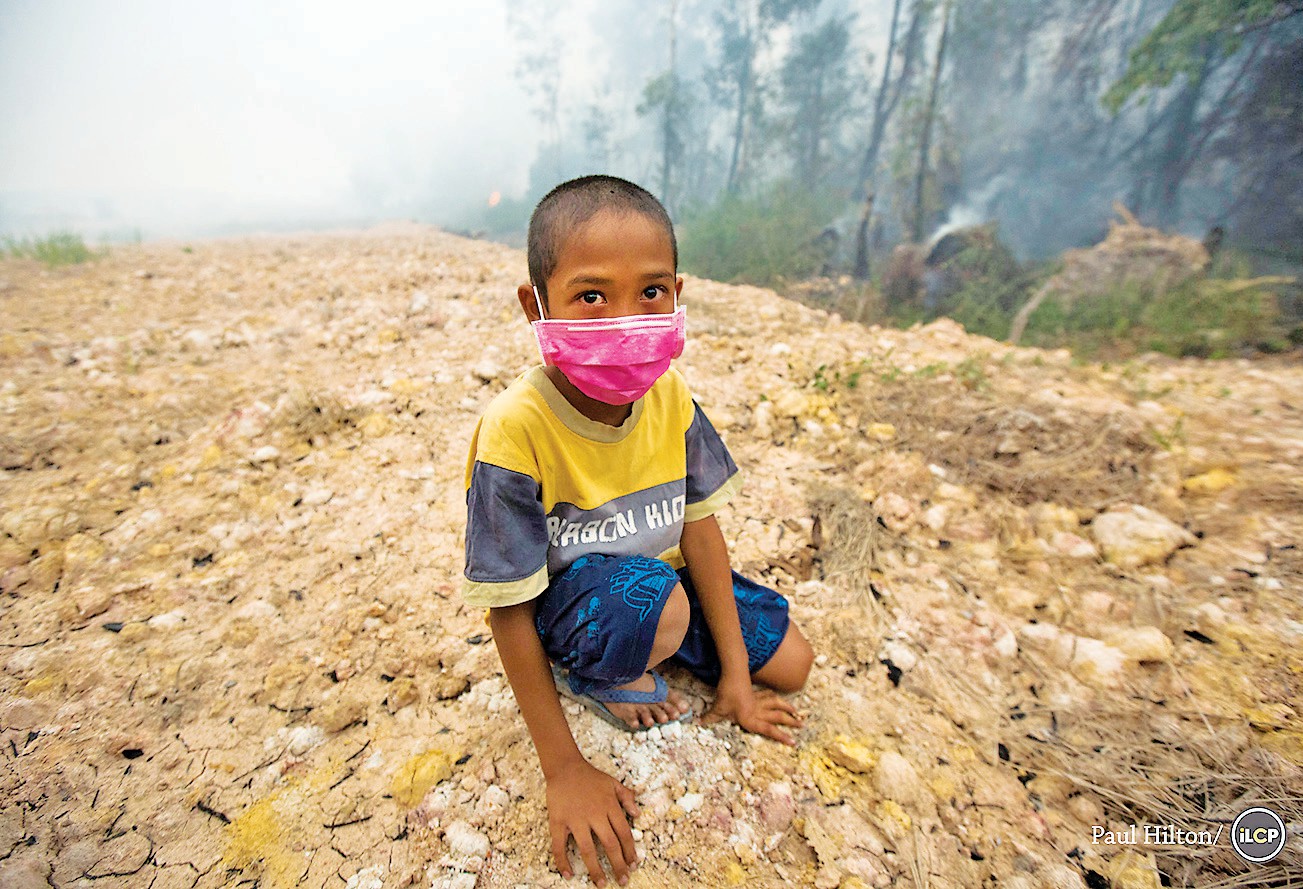 Outdated and detrimental to humans too, slash and burn techniques are still used in developing countries.

that they not use “conflict” palm oil in their products.

We won’t be able to cut out all palm oil in products, but by being informed, reading labels and saying “No” to that bag of chips or writing a letter to that cosmetics company that uses palm oil, we can give companies an incentive to use certified palm oil. A quote from Jane Goodall says it all, “There is still so much worth fighting for.”

If you want to learn what to look for in 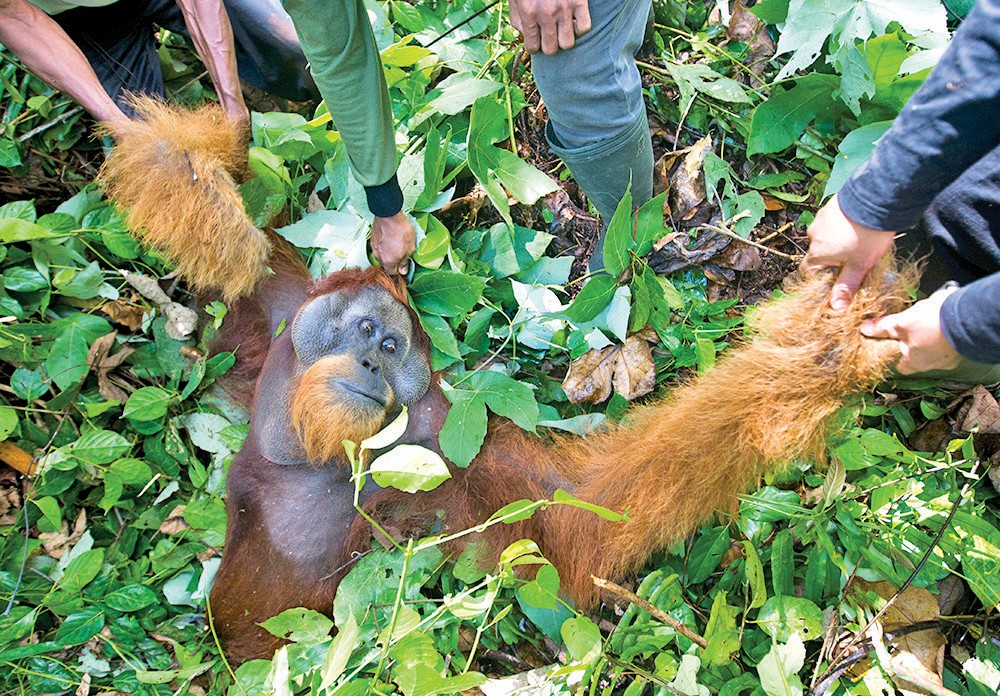 Above: An orangutan rescue underway. Right: A medic carries an injured orangutan.

labelling beyond finding palm oil listed among ingredients, go to palmoilinvestigations.com. They offer a comprehensive list of the compound derivative names of palm oil. They have just introduced an app to help consumers identify products containing palm oil. If you’d prefer to make a financial donation to an animal rescue organization, there is International Animal Rescue, the World Wildlife Fund or consider supporting the GoFundMe effort of the photographer featured here, Paul Hilton, for elephant protection units.

Sean Connery once starred in a movie 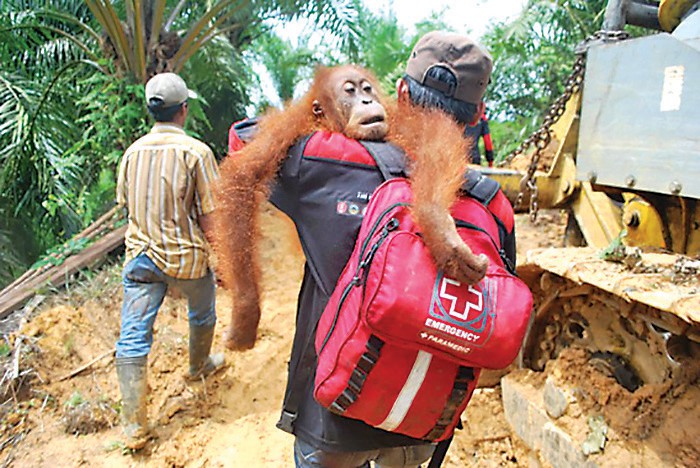 about a brilliant scientist finding a cure for cancer. He was deep in a remote part of the Amazon jungle when suddenly, all around him was being slashed and burned. Everything he had just discovered completely lost forever. Sadly, like some old-time science fiction thriller predicting today’s reality, this 1992 movie entitled, “Medicine Man” was foretelling.

Manufacturers want to please their customers. It is a slight inconvenience to check a label, to pick a different brand or chose an apple over a bag of Doritos. The action you take today just might save an entire species.