What have you done for safety? 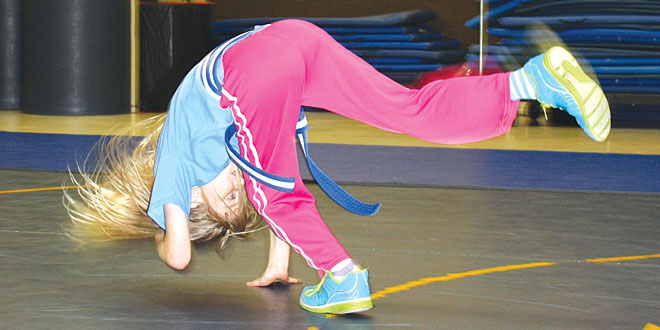 “We all want our kids to be safe, but we don’t typically do a lot to enable that. Everyone knows safety is very important, but what have you done to enhance your safety lately? Usually people don’t have a strong answer. So where this program becomes important is because it puts those (safety) skills to work.”

Jim Boxma, who holds a second degree black belt in American Karate, believes that teaching children how to properly defend themselves, if ever needed, is the key to not only staying safe, but also helps improve body relationship, balance, extension, blending and controlling one’s own mind. He also knows that in a fun, laid back atmosphere, kids from 7 to 13 can acquire these skills and also become more self confident in the process. Through his Defense Fitness Club at Mackle Park, Boxma holds Freestyle Martial Arts sessions four times a year. Each session is one month with classes held on Tuesdays and Thursdays. 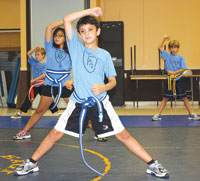 Dylan Gattas practices an upper block, with Natasha Gattas behind him. To the left is Ryan Garraty and to the right, Mason Mullen.

investment advisor by day, has studied different forms of martial arts since 1988. While living in Texas, he earned his black belt status and also began the Defense Fitness Club, teaching kids the fundamentals of martial arts fitness and defensive techniques. In 2010, his family moved to Florida, where he began teaching almost immediately at Mackle Park. “We just hit our four year anniversary,” he adds.

“My view, based on all the training that I’ve done, is it’s really (about) a couple simple things. It’s getting kids prepared for what could happen to them, getting them in the right mindset as to what to do, and then allowing them to practice and train their minds and their bodies to… execute that readiness.”

Boxma specializes in ages 7 through 13 because, again, through his experience, he has found that age 7 is a really good starting point because, “for younger students, some of the concepts are harder to grasp, and at age 7 they’re going into second 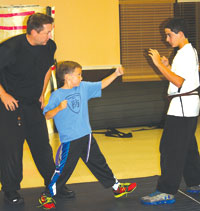 Jim Boxma, called Joshu by the kids, which means apprentice, watches John Boxma and Thomas Harrington as they practice their techniques. John and Thomas are the highest ranking students, being at Purple and Brown Belt respectively.

grade and growing into their bodies a little bit. It really shows a dramatic ability in skills, and an increased interest (at this age).”

At 13, students are heading into high school, where many more sports are available. Boxma finds that many of his students tend to detach from martial arts at this point. He would, of course, continue to train any student interested beyond the age of 13.

With the age group he works with, Boxma feels that preparation is the real key. As they cross over from youngsters into teens, the need for self defense begins to play a larger role.

The classes do more for students than just train them for safety. “It really carries over into a lot of other aspects of life which is why I think we have success here at Mackle Park,” explains Boxma. “From a sports perspective, it’s kind of reinforcing things they are learning in school – being good citizens, being respectful and considerate. We try to carry 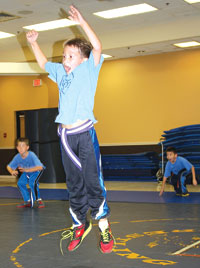 all those aspects over, while in time, getting them physically ready and trained for a possible worst case scenario, which we hope never happens.”

Boxma chose to utilize the title Freestyle Martial Arts to focus in on the defense aspect rather than the cultural aspect of the different forms of karate or tae kwon do. This different take on classical martial arts allows him to mix things up and teach the basics in a way that students can quickly understand, master and have a lot of fun along the way.

Sessions cost $55 each with a one-time fee of $25 which gets the students a t-shirt and covers other program costs. Pre-registration is required.

Boxma also teaches a women’s only self defense course three times a year at Mackle Park. “It’s the ABC’s of self defense… since 2010 we have taught over 100 women.”

Safety is crucial at any age. What have you done for your safety lately?

Learn more about Boxma’s sessions for both adults and kids by calling Parks and Recreation at 239-642-0575.