What Happens In Vegas… 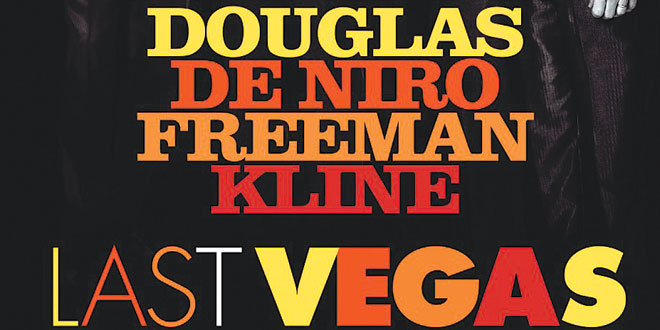 If you suspend your disbelief, sit back and relax and you just might enjoy “Last Vegas.” It’s virtually mindless frothy comedy with a predictable script, saved only by the acting of four old pros and a decent director. Yes, there are some reminders of the vicissitudes of aging that draw some guffaws from the geezers, but no deep message.

The unlikely quartet of Billy (Michael Douglas), Paddy (Robert De Niro), Archie (Morgan Freeman) and Sam (Kevin Kline) grew up as buddies in Brooklyn. Here’s where disbelief must be shed immediately. No such mixed group of kids became best pals in Brooklyn (or Manhattan, Queens, The Bronx, or Staten Island) to the best of my knowledge. Fortunately, Director Jon Turteltaub does not even try to take that and send a message of tolerance and good will. He conveniently glosses over that and concentrates on light comedy.

Billy is the successful 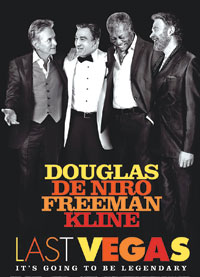 one. He now lives in L.A. and becomes engaged to a young – very young – bimbo type. To celebrate his coming nuptials he invites his old buddies to a geezer bachelor get together in Las Vegas. Genial Sam (happily married) and ancient, well-mannered Archie do not need much persuasion. However, resident widower and group grouch, Paddy, carries a grudge against Billy and must go through lots of prompting and pushing to get out of his recliner.

What follows are the adventures of the fearsome foursome in Las Vegas, complete with well-telegraphed verbal and sight gags. The “X” factor is the appearance of Diana (Mary Steenburgen), who has given up her boring life as a tax attorney to become a lounge singer in Sin City. Obviously she has a heart of gold even though she doesn’t sing very well. Her role adds a pretty good touch, and the acting is just fine.