What ever happened to Yugoslavia? 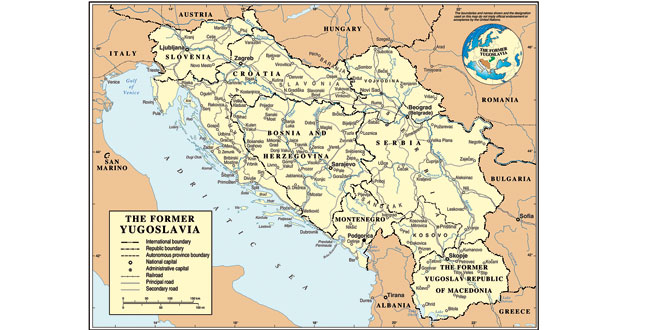 The more I read and listen to people talk about the history of this area, the more complex it seems. Yugoslavia was composed of six republics and two autonomous regions, five nationalities, four official languages, three official religions, two official alphabets, and a mixture of many ethnic groups. No wonder its dissolution was so complicated.

Part of the Balkan Peninsula, the earliest inhabitants of this area included the Illyrians, followed by Greeks and Romans; vestiges of those cultures remain. Then came the Slavs and the Byzantines. When the Roman Empire was split in the fourth century AD, this area was divided into Roman Catholic in the West and Byzantine Orthodox in the East. With the invasion of the Ottomans, there was a further division into Islam in the South. At various times in history, parts of this area have been ruled by the Venetians, Ottomans, Hungarians and Hapsburgs and their influences are still seen in architecture, culture, and food. Geographic divisions were general and ethnic groups overlapped. For a time, Napoleon controlled part of this area.

The assassination of Archduke Franz Ferdinand of Austria by a Bosnian Serb who was part of a group who wanted the southern Slav provinces to be independent precipitated World War I which led to the breakup of the Austro-Hungarian Empire.

After World War I, the south Slavs, primarily the Croats, Serbs, Bosniaks, and Slovenes joined together in what would become Yugoslavia. Yugoslavia means land of the South Slavs. Generally, the Croats and Slovenes were Catholic, the Serbs Orthodox, and the Bosniaks Muslim. A note of clarification: the terms Bosniak, Croat, and Serb refer to ethnic groups; Bosnian, Croatian, and Serbian are terms used for all citizens of those countries.

The union of the different ethnicities was never smooth and many of the Croats in particular saw all their money flowing to Belgrade and thus supported the Fascists hoping it would lead to their independence from Serbia. After the Axis Powers invaded in 1941, the Independent State of Croatia was established as a puppet government ruled by what was known as the Ustaše and ethnic cleansing of 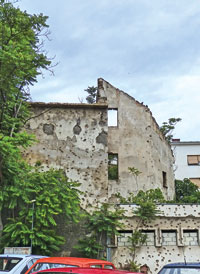 Bullet ridden relic of the 1990s wars in Bosnia. PHOTOS by VICKIE KELBER

Serbs, as well as Jews and Roma followed.

As World War II concluded, the Communist Partisan Army led by Josip Broz, known by the nickname “Tito”, forced out the Nazis. Tito became prime minister and later President for Life of what was then known as Yugoslavia. It is said by many that he was the only man who could hold together these various ethnic groups. His parents were a Slovene and a Croat, his wife a Serb, and he lived in Belgrade. Tito and most of his government had been excommunicated by the Catholic Church after their indictment of the Archbishop of Zagreb for collaborating with the Ustaše.

A member of the Communist Party, it does seem that it was Tito’s strong personality that held Yugoslavia together for 40 years. Tito practiced his own form of Communism/Socialism, different from that of Stalin’s Soviet Union. He maintained neutrality during the Cold War and tried to work with both the East and the West. Travel was open both in and out of Yugoslavia and there was somewhat of a market economy.

The six republics of Yugoslavia, which each had their own government and president, were Croatia and Slovenia which were primarily Catholic, Serbia primarily Orthodox, Bosnia-Herzegovina primarily Muslim but with Croat and Serb populations, Montenegro primarily made up of Montenegrins and Serbs, and Macedonia with a large population of Albanians. There were also two autonomous provinces, Kosovo with a high population of Albanians, and Vojvodina with its Hungarians. To prevent any ethnic group from becoming too strong in one area, Tito required all units of the National Army to be made up of equal representation of all ethnic groups.

Tito died in 1980. By the late 80s, ethnic tensions were on the rise in Kosovo. Slobodan Miloševi? became president of Serbia and annexed Kosovo; he went on to the presidency of Yugoslavia in 1997. Ethnic violence increased in Croatia and in 1991 Slovenia and Croatia declared independence. The Yugoslav National Army attacked Slovenia, but that war lasted only ten days. In 1990, Serbs in Croatia had started rebelling and in 1991 the first shots of the Croatian Conflict rang out. The Yugoslav Army, by this time composed mostly of Serbs, attacked as Croats were forced to evacuate. By 1995, the tide had turned, and hundreds of thousands of 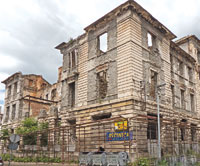 One of the many ruins in Bosnia left after the Yugoslav Wars in the 1990s.

Serbs fled Croatia. In 1993, there was fighting between the Bosnian Muslims and Catholic Croats; a peace treaty was signed in 1994.

In 1992, Bosnia declared independence and the Siege of Sarajevo between Bosniak and Serb forces began. Primarily ethnic cleansing first against the Bosniaks and Croats by the Serbs and then by the Croats against the Serbs, the Bosnian War lasted until 1995 and included such atrocities as the slaying of 8,000 mostly males in Srebrenica, Bosnia and “rape camps”; tens of thousands of girls and women were raped. The Dayton Peace Accords ended the conflict, dividing Bosnia-Herzegovina among the different ethnic groups.

In 1998, Kosovo was the scene of fighting between the Serbs and ethnic Albanians. Miloševi? sent in his army again for ethnic cleansing; NATO intervened and the Serbs left in 1999.

In 1992, Macedonia’s declaration of independence was peaceful; Montenegro declared independence 2006. Slovenia has been a member of the European Union since 2007, Croatia joined in July of this year. In recognition of its different ethnic groups, Bosnia and Herzogovenia is one country with a unique form of government recognizing its three ethnic groups and is a candidate for NATO and eventually perhaps the European Union. The Republic of Serbia founded in 2006 is also a candidate for the EU. Kosovo remains the one area with questionable status. It declared independence from Serbia in 2008, but Serbia does not recognize that independence, although the two have recently exchanged liaisons. The United States recognizes Kosovo’s independence, but there are many countries that do not.

Atrocities during all of these conflicts were many. More than 100,000 were killed and millions lost homes. Miloševi? was put on trial in The Hague in 2002, but he died in 2006 before a verdict was declared. The International Criminal Tribunal for the Former Yugoslavia is still conducting business, with hopes that all trials and appeals will be completed by 2015.

Driving through the most affected countries, the ruins of war are still in evidence. It took more than 10 years to clean popular areas of land mines; some remote areas still struggle with cleanup. Some major roads have only recently been repaired.

Looking back, the people of the former Yugoslavia have mixed views about Tito. Although he used strong arm measures, especially in the early years of his presidency, there is 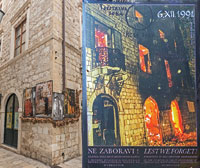 On the left is a restored home/gallery of an artist in Dubrovnik; on the right is a photo of a poster showing the site under seize in 1991. The artist has memorialized his building with posters admonishing “Lest we forget.”

a certain Tito nostalgia expressed by many. A forty year old woman wistfully recalled to us her childhood under Tito when both her parents had good jobs and families got a subsidized two week vacation on the coast every year. She now works as a tour guide but is also in law school. She is taking her time finishing her degree because there are no jobs.

The lack of jobs is a recurrent theme today. We had a guide at the Roman amphitheater in Pula who is a licensed veterinarian but serves as a guide because there is “no work” for vets in Croatia. She considered going to Australia where the job market for her profession is good, but her family is in Croatia and she does not want to leave her country.

A man in his thirties told us of his childhood during the 90‘s wars; he, his mother, and siblings had to leave their home and hide out on a nearby island. Now he works hard on the family farm and also has a job at a sports complex in Dubrovnik. When asked about marriage, he replied that he does not have enough money to support a family.

A woman living just outside Plitvice National Park told how her ancestral home was destroyed in the war. Its shell remains behind the new house she and her family have been building for seven years; the new one is still not complete. She tries to help by renting out rooms but has no money to advertise so the rooms often are empty.

The mixed views that citizens have of their conflicted history is exemplified by the naming of a bridge in Dubrovnik. An aesthetically beautiful cable bridge completed in 2002, its official name is the Franjo Tudman bridge, named for the first president of Croatia, controversial because of possible war crimes committed by him. Some people objected to the bridge’s name, a dispute ensued and presently on one side of the bridge there is a sign acknowledging the official name; on the other side the sign translates as “Dubrovnik Bridge”.

We recently visited four of the former Yugoslav countries. Despite their conflicted history, the countries are beautiful, the people welcoming. English is widely spoken and the cities and towns are safe. I will be writing more about these countries in upcoming columns.

One response to “What ever happened to Yugoslavia?”