What Does the Future Hold for the Dome Home? 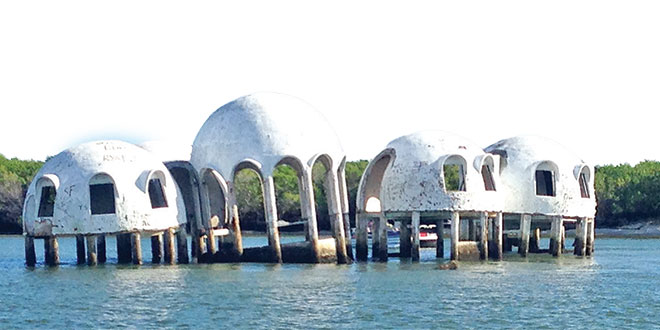 In previous issues Coastal Breeze News has shared readers’ photographs and stories about their experiences with the Cape Romano dome home. Through these photos we have seen the rapid progression of the deterioration. The dome home is being literally swept away into the sea. Universally our readers have expressed concern over the fate of these iconic structures.

In 2005, the dome home was purchased by the Tosto family trust for $300,000. Originally John Tosto had expressed an interest in saving the structures; that now seems impossible. Since 2005 the Cape Romano landscape has changed dramatically, partly due to the wrath of Hurricane Wilma combined with the course of Mother Nature. Today, the structures are submerged in the water, and disintegrating.

In 2007 the Collier County Code Enforcement Board issued an order that the structure was unsafe and must be demolished or removed within two years. Fines against the property owner were assessed.

The transcript for the November 2009 CEB hearing includes testimony from Tosto, saying that his plan was to “build a new foundation, cut the domes from the old foundation, put them on the new foundation and demolish the existing foundation.” It was pointed out by the board that their original order sought demolition, not reconstruction of the dome home. But when one of the board members suggested that he demolish first and get his permits to build later, Tosto expressed concern, “If I take that structure off the beach, there will never be another structure permitted on the beach.”

Either solution would be challenging. Three permits were needed- from the Collier County Code Building Department, the U.S. Army Corps of Engineers, and the Department of Environmental Protection. To assist him with permitting, Tosto hired Turrell and Associates.

In 2013 the CEB order was amended. One change was the addition that if Tosto failed to abate the violation, the county may do it using “any method to bring the violation into compliance” and all costs would be assessed to Tosto.

Still, during a recent boat ride by the structures nothing appears to have been done, and no further action or lien foreclosure appears in the public record. As of press time, Coastal Breeze News was waiting for an update from the county.

In June this year, digital media reported that a group planned to create an artificial reef from the Cape Romano dome homes, named for the nonprofit Oceans for Youth Foundation. Funds are being collected by Timothy J. Cotter, P.A. through plumfund.com (www.plumfund.com/fundraising/create-a-reef).

Although Oceans for Youth Foundation is a 501(c)(3) non-profit organization, as the Plumfund campaign page discloses, Timothy J. Cotter P.A. is not. According to public records, Cotter prepared the warranty deed transferring the property to the Tosto family in 2005. According to recent reports, he is part of the team working to save the structures for use as an artificial reef, along with Tosto and Tim Hall, Turrell, Hall & Associates, the firm that had assisted Tosto with his permitting requirements.

Lisa Fleming answered our request for an update on the project, and told us she has been working for over three years to save the dome homes “to create an artificial reef and a habitat for our marine life.” What the group needs is funds. Of the $2.2 million needed for the project they have only raised $210, and that number has not changed in months.

Another alternative that has been proposed is the placement of navigational markers around the site. In Coastal Breeze News’ next article on the Cape Romano dome home, the feasibility of this solution will be explored.

The fate of these structures is still unknown. Whatever the solution may be it is the hope of many to preserve or reuse the structures in a way that acknowledges their importance in our local landscape and history.

Aerial photos show the progression of beach erosion from 2005, when the property was purchased, to 2007 when the order was issued to remove the structures, to the present year.