What Birds Eat… The Beak Can Tell the Tale 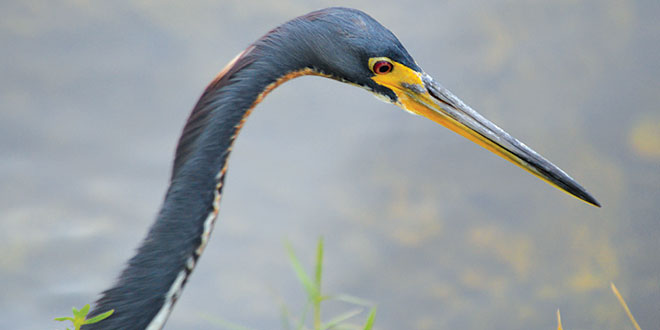 Wood storks use “tactolocation” to find foodand can close their beak in 1/20th of a second!

Have you ever seen a reddish egret dance along the shoreline to snag a meal? How about a great blue heron sitting trance-like on a mangrove branch just one foot above the water to catch a fish? Or an osprey swooping into the water feet first to grasp its prey?

There is such a variety of bird life in the Marco area, and they capture their next meals in several different manners. One physical feature can tell you something very unique about their diets. Take a look at the shape of the bird’s beak.

Also known as the bill or the rostrum, the size and shape of many birds’ beaks can explain their diet and eating habits. Because of the individual techniques for obtaining food, the size of the next meal and source can vary greatly. For the most part, the birds on and around Marco Island can be placed into one of four categories: wading birds, shore birds, raptors and song birds.

WADING BIRDS: The most common wading birds in the area are the great egret, snowy

egret and the great blue heron. All of these have long, thin beaks and long necks. Quite often, they will stay motionless in the water or on a branch just above the water. The neck will be tucked back far enough that it can lunge forward when a fish comes within range. They also will eat lizards, frogs insects and even rodents.

My favorite wading birds to watch while feeding are the reddish egrets. They have a very unique dance that they perform along the water’s edge. They will energetically run in shallow water seeking prey. They will throw open their wings to reduce the glare of the sun on the water to more accurately spear a fish. It is quite a sight to see.

SHORE BIRDS: Gulls, terns, willets and other such birds own this category. Their beaks and legs are much shorter than the egrets, so we can expect their diet to be different as well. Though some will fly above the water to seek food, many are content to travel the shoreline looking for aquatic invertebrates. It

is not uncommon to see them rush toward the water on an outgoing wave, search for food, and then run back up the shore as the wave returns.

My favorite bird to watch in this category is the black skimmer. The lower beak is slightly longer than the upper, and the skimmer will fly along the water, mouth open and capture any small fish at the surface.

SONGBIRDS: Sparrows, warblers, thrushes and jays are the dominant birds here. Much smaller than the species mentioned above, they have a different menu because of habitat and size. Predominantly, they dine on grasshoppers, crickets, moths and the seeds of some grasses. The beak is much shorter, as well as the legs, simply because they are adequate at that size to catch this type of prey.

RAPTORS: Eagles, ospreys, hawks and falcons are the primary predators in this category. They are completely different from any bird mentioned above in that the beak is short and very sharp, and they will swoop down, grab prey with their talons, and fly the catch to another location.

Osprey will pick up their prey in the water andfly it to another location for consumption.

of beak allows the raptor to “rip and tear” the meal for consumption. Although fish is the staple of their diet, they also will eat snakes, lizards and even other birds. Once they land with their meal, the sharp toes allow them to grasp it while shredding it to feed.

My favorite raptor is the perregrine falcon, the fastest animal on the planet. They will stalk their prey from high in the sky, dive toward the object at speeds in excess of 200 miles per hour and strike in mid-air. Sometimes, the force of the impact will kill the catch immediately.

Many types of birds, many sizes and sources of prey. Just looking at the beak can often tell you what’s on that species’ menu. What lives in your backyard? What will you see while driving today? Is that a wading bird or a raptor?

Take a close look at the beak…it just might hold the answer!