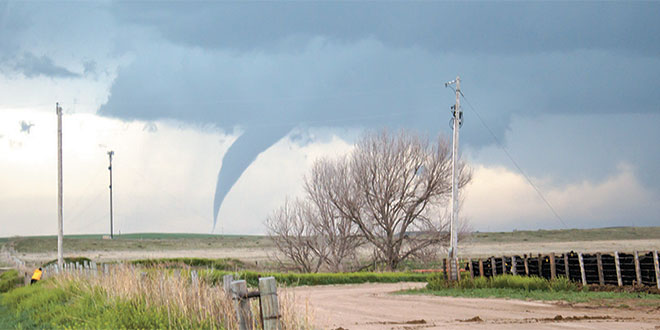 A funnel cloud near Wray, Colorado.Photos by Ryan Rackliffe

Pursuing a degree in meteorology can bring about a most interesting hobby.

In the case of Brandon Black of Marco Island, and three buddies, their hobby is tornado chasing.

“Since I arrived at North Carolina State to pursue a degree in meteorology we began storm chasing,” he said. “Our primary targets have been tornadoes.”

Their original target was Eastern Colorado then north to the Nebraska border where they expected their best chance for tornado development. However, as they got on the road they determined that Colorado and Oklahoma would be best.

“At first nothing really looked that great,” Black said. “We got a couple of pretty cloud photos and a couple

Brandon Black and fellow meteorology classmates captured this image of a tornado near Wray, Colorado.

of weak funnel clouds, then intensity built and danger increased like the flip of a switch,” Black said.

Suddenly, they were on a dirt road, with nickel-sized hail banging the car.

“We ended up finding ourselves in front of a tornado-warned thunderstorm,” Black said.

They were able to race ahead, positioning themselves to witness the formation of a tornado, but the storm only provided a weak tornado in an open field.

No problem, there was more to come.

About 15 minutes down the road, in Wray County, “I noticed a cell coming from the south that could only be described as the mothership from Independence Day,” Black said.

It was moving at them slowly so they decided to wait to get some film footage and photos. However, as it got closer it started rotating faster and eventually put down a land-spout, then the real show began.

A tornado near Sulphur, Oklahoma.

to drop south along the road to get closer to the cell.

“The real tornado formed about 300 yards down the road,” Black said. “We sat in awe as this beautiful funnel descended, with debris and dust picking up. I spun the car around and my navigator Ryan tried to get us out of the situation.”

They experienced baseball-sized hail to their north and a large tornado to their south.

“It was by far one of the most beautiful tornadoes in history,” Black said. “Many chasers agreed, claiming it was the shot of their careers.”

There wasn’t much action on day two, but day three really picked up.

Black called it a classic Oklahoma monster thunderstorm. It tore through fields and unfortunately homes, Black said. The tornado ended up being an EF-4, which is the 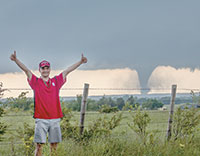 They weren’t done yet.

Driving back to Sulphur a large tornado had formed to their west.

“I pulled off the road on a hill where we looked at a mile-wide monster tornado,” Black said. It blew by them, with 50 mph winds.

“We snapped pictures and video as it barreled by us,” Black said.

After three days, 4,500 miles, three states, and seeing six tornadoes, they headed back to North Carolina.

They weren’t paid and it wasn’t for college credits. It was meteorologists-to-be experiencing Mother Nature.

Black has sold some photos and film to ABC, NBC and Weather Channel websites.

What does this mean for after graduation, a year away?

“I want to get into some type of forecasting position, working for Panasonic, forecasting for the aeronautics division,” he said.

He has done some work for Panasonic.

“I will stick with that or try finding a job along the lines of forecasting severe weather.”