WHAT A CROC! Crocodile, That Is 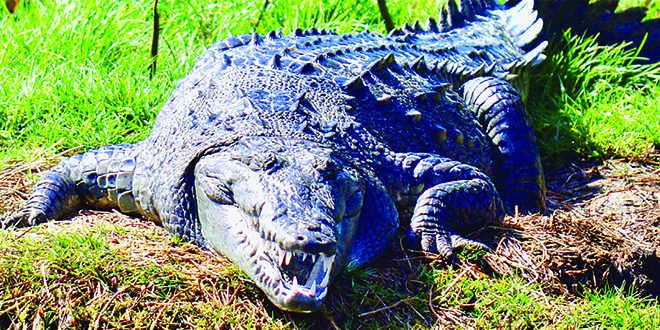 This big croc has been seen regularly for more than a month in the area of the viewing tower on the Marsh Trail.

Ah, spring! Love is in the air! Many of our local birds have built their nests and mating has begun. For some species the young have arrived and parents are busy feeding these insatiable youngsters. Some islands are now closed to the public in preparation for migrating bird species to raise their chicks.

Deep in the Everglades, and in some cases not so deep, the bellows of the male gators calling females are now being heard. Combine this mating season with the lack of rain in recent months, and some other creatures are showing their faces in shallow waters. Rarely seen but definitely a resident of South Florida, a prehistoric dweller is hanging out at a popular walking trail. Don’t be surprised if you are enjoying the Marsh Trail and you come across a crocodile!

Most of us are aware that Florida is home to about 1.4 million alligators, but not too many know that roughly 2,000 crocs also call the Sunshine State their permanent residence. Alligators can be found as far north as the Carolinas, but this is as far as the crocs go.

Gators are more of a subtropical, fresh water reptile, while the croc is more comfortable in saltwater habitats. However, both enjoy mangrove swamps and brackish water ecosystems. Crocs not only tolerate saline waters, they prefer it. The American alligator does not have a “salt gland,” an organ for excreting excess salt, but the crocodile does. These glands 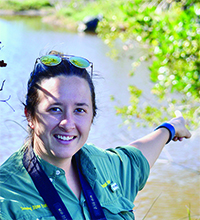 maintain a salt balance and allow the crocs to drink seawater. A membrane moves salt from the blood and into the gland for excretion as a concentrated solution.

Again, South Florida is as far north as a croc will naturally be found.

Central America and South America have higher populations than we do and they can range down to Brazil and Peru.

There are several notable differences between these two reptiles. Gators are darker in color and have a broader snout. The croc snout will be more “V” shaped and the fourth tooth on both sides of the bottom jaw will be visible when the mouth is closed. Both are “ectothermic,” which means that they regulate their body temperature utilizing outside sources, like sun and water. An ideal temperature for both will be about 80-84 degrees. When you see a croc with its mouth open it is not being aggressive. This is just one more way to help regulate that body heat.

The adult female will build a nest on an elevated, well-drained site to protect it from any rising waters. Eggs will stay in the nest for about 85 days, and those incubating below 88 degrees will be female and temps of 89 to 91 degrees will produce males. So the sex of the embryo is strictly determined by nest temperature and is not known at fertilization.

The female that laid the eggs might not remain near the nest but, toward the end of the incubation period, she will visit that site more frequently. When the hatching process begins the mother will dig the nest open and help the young emerge from their shells. She might also assist the baby crocs to nearby water or possibly a familiar nursery site. The adult female has

now completed her task and will leave the young within a day or two to fend for themselves.

These youngsters suffer a high mortality rate. They are preyed upon by a variety of birds, raccoons, and even some species of crabs. Those lucky enough to make it to adult status could possibly live more than 50 years. The croc seen at the Marsh Trail obviously beat the odds and has lived to be quite large.

The question often arises regarding crocodiles being more aggressive than alligators. Opinions seem to be consistent that both reptiles are not out to stalk humans. Croc attacks on humans are rare to non-existent in Florida, but they should be well respected for their potential to cause harm. Treat them with caution and respect, as you should all other wild animals.

So venture down to the Marsh Trail. When you get to the viewing tower look in the waters to your left and see what you might find. This is the location where this big one has been on several occasions. Is it just passing through or is this possibly a new nesting site? We’ll know more by mid-summer!

PS: On the same day of the croc sighting, naturalist Stephanie Lyons and I noticed some tracks in the now very dry marsh area. We photographed these slithering depressions and sent the info to the Conservancy, where our suspicions were confirmed…a large python had been in the area recently!

Bob is the owner of Stepping Stone Ecotours conducting walking tours of the Big Cypress Preserve through April. He is also a naturalist for a dolphin survey team on board the Dolphin Explorer. His popular new pictorial book “Beyond The Mangrove Trees” is available at several locations on the island. Bob loves his wife very much!