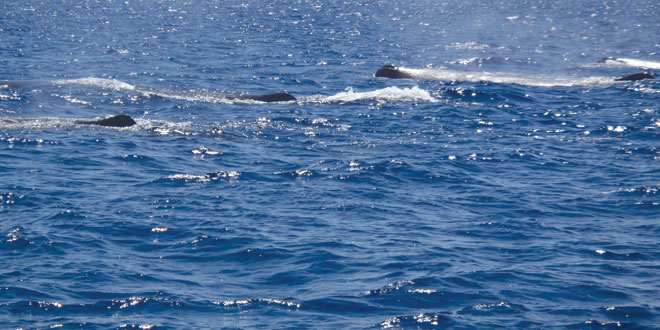 “It is not down on any map; true places never are.” – Herman Melville, Moby-

The unexpected experiences are always the most memorable and perhaps the most real.

While fishing offshore Miami a few weekends ago nothing much was happening; no fish were biting, no birds were flying. It was hard to complain about not catching anything, though. The day was beautiful on the Atlantic Ocean about 6 miles offshore Biscayne Bay. The water was clear deep blue, the seas were calm and air warm. Watching the occasional man-of-war jellyfish float by with its bubblegum pink and deep purple sail, flying fish scattering as the boat trolls at eight knots, pads of sargussum with schooling fish taking cover underneath streaming by, was just bliss.

Early afternoon, no fish biting, it was time for lunch and a snorkel at Careysfort Lighthouse reef. After swimming in and around the sea fans and conchs with sea turtles, stingrays, damsels, parrotfish, a hogfish and too-many-to-count barracuda, it was time to go fish again.

While leaving the sanctuary of the lighthouse and reef, lines out to troll for that day’s elusive mahi mahi, in a flash on the horizon were enormous splashes. Whales. Breaching. Lines were quickly reeled in and the destination was to the horizon to get a better look. After ten minutes of running, nothing was seen. But then suddenly, disrupting the ocean surface about 200 feet from the boat were eight or nine stumpy fins and bushy blows of water. Seeing bulbous heads and in the excitement of the moment, it was assumed it was a pod of Pilot Whales. But other characteristics proved that a wrong identification. The disproportionately large heads with the blowholes set far forward and skewed to the left, the wrinkly skin along their sides behind the head area, and the thick caudal fins emerging as they move along concluded that the encounter was with a pod of Sperm Whales.

This pod of Sperm Whales was bucking the Gulf Stream headed south. Traveling a few hundred feet from the pod, with the sonar off, it was amazing to see them chug along as a unit on a mission. In this region of the globe, female Sperm Whales travel in the region in groups with their young; males will migrate from the higher latitudes to warmer waters for breeding only. The lengths of the whales ranged between 20 to 40 feet (bigger than the boat!) indicating that this pod was most likely made up of mature females and a couple generations of younger whales. The sexes have a great difference in size – males can weigh up to 120,000 pounds and females can weigh up to 55,000 pounds.

Sperm Whales (Physeter macrocephalus) are the largest of the tooth whales. They have 20 to 26 pairs of large conical teeth in the lower jaw that fit in the sockets in the upper jaw. They have the largest brain of any living thing on earth – at least five times heavier than humans. They were hunted largely for the oily substance found in their huge heads called spermaceti. Spermaceti is made up of triglycerides and wax esters. A typical Sperm Whale’s head can contain up to 1,900 liters of spermaceti. This substance was thought to be sperm by the whalers, hence the name. In the 18th and 19th centuries it was used to make candles and street lamps. In reality, the mass of spermaceti is used for echolocation and communication and the spermaceti organs are thought to be used by the whales to regulate their diving to deep depths to catch and eat giant squid. They dive deepest of all cetaceans except the bottlenose whales. Most dives are hundreds and thousands of feet in depth for about 40 minutes but they can dive to a mile depth and stay submerged for up to two hours. They are also known to rest, or “raft”, on the surface of the water for up to 10 minute periods.

Their distribution stretches from the Arctic to Antarctica including most large gulfs and seas. They tend to be seen in deep water near continental shelves, ridges and ocean canyons. This makes sense where this pod was seen along the shelf off Miami in water depths of 1,000-1,500 feet. Over on the southwest coast of Florida, the Gulf of Mexico has a population estimation of 1,400-1,660 Sperm Whales. This population is year round and has been found to be distinct from the groups in the Atlantic Ocean. During a 2008 oil spill, three Sperm Whales washed up in Port Aransas, Texas. It is unknown how many other were killed or harmed by that disaster as they were known to often be in the deep Gulf canyon area of the spill. When they washed up, there was much surprise to learn of this species of whale in the Gulf of Mexico!

Today, even after the whaling industry of the past that drove down drastically the numbers of these whales, worldwide there are estimated to be tens of thousands of Sperm Whales. Maybe with that huge brain they have outsmarted us all! To encounter them so close to home was amazing and magical. Sperm Whales so close to our boat offshore Miami in the deep Atlantic Ocean waters was an experience that we will never forget. Need a summer read? Moby Dick seems to be appropriate!