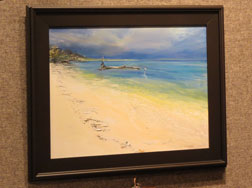 The paint hadn’t dried, but 120 art aficionados had been fed and watered and were in the mood for a live auction at the Marco Island Center for the Arts.  This was, after all, “Wet Paint Live”, an ingenious event in which 21 artists spend just one day painting in and around Marco Island and have their pieces auctioned off for charity.  The painters worked everywhere from the Isles of Capri to the top of the Jolley Bridge to the Esplanade to Goodland and points in between.

On February 10, Chris Lombardo, celebrated auctioneer and partner in the law firm of Woodward, Pires and Lombardo, rapped the gavel and started the proceedings.  He skewered just about everyone in sight – young, old, Democrats, Republicans, artists, his own law partner and one bidder only known as “The Assassin”, in his usual hilarious tour de force.  He was accompanied by K.D. Lackey, a fellow lawyer, from Oklahoma, believe it or not, who was also first rate at the podium and an excellent foil to boot.

From the opening bid onward, for over two hours, the bidders took turns buying some remarkable paintings, particularly in view of the fact that not one took more than about five hours to produce.  Bids were punctuated by jibes about the bidders and 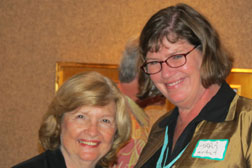 anyone else Mr. Lombardo could conjure up (including himself – or at least, a portion of his anatomy).The auction, presented by the Marco Island Area Chamber of Commerce, Leadership Marco, Marco Center for the Arts and Marco Island Foundation for the Arts, grossed more than $14,000, from the live and accompanying silent auction.  Proceeds are for the Leadership Marco Scholarship Fund.

The artists, all of whom have long and impressive credentials, are: