Welcome Back to the Nest 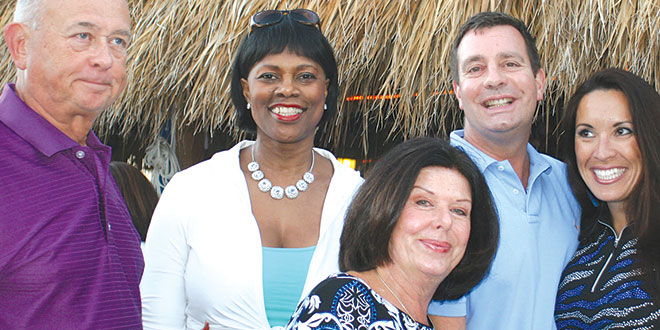 Supporters of Marco Island’s prominent eagle residents flocked to the Snook Inn Tuesday night for an evening of fun and fundraising. Carl Way, founder and chairman of the Marco Island Eagle Sanctuary Foundation (MESF), welcomed old friends back to the nest and engaged newcomers in discussions about protecting the birds actively nesting in the sanctuary.

“This event is about raising community awareness,” said Way. “It’s not a big fundraiser, but one that people look forward to. It’s a welcome back for everybody.”

Currently, two Bald Eagles named Calusa and Paleo are actively working on building a nest in the same Australian Pine in the sanctuary that local observers say eagles have used since the 1980s. Marco Island’s Eagle Sanctuary occupies approximately 11 acres at 665 Tigertail Court. It is protected under Federal and State law, and funds raised through 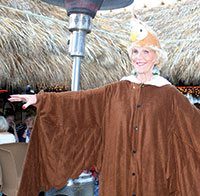 Susie Walsh spreads her wings at the back to the nest event Tuesday at the Snook Inn.

contributions and pledges maintain the preserve. While visitors cannot enter the sanctuary, the eagles can be seen from off-street benches.

Vicki Smith and her husband Paul share a bird’s eye view of the eagles’ daily activities from their property which borders the preserve. “They are super active right now,” Vicki noted. “The other day we watched Paleo pulling out dried branches for the nest and then heard a crack. A 5 foot-long limb was dropped.” She described the bird’s persistence in retrieving the branch, with Paul adding, “They are all over the place; there’s something going on.”

Eagle nesting season spans several months, usually starting in October. In the past two years, the eagles have produced eggs and even a hatchling, but none of their offspring have survived. Linda Turner, director of operations for MESF, explained that the birds were likely

scared away from the nest by New Year’s fireworks, a threat hoped to be avoided this season.

An agreement has been reached with the Marco Island Marriott Hotel prohibiting fireworks on the hotel premises during nesting season, Way added. Now it’s up to local residents to spread the word about the havoc fireworks can raise. Way explained that only 50 percent of all eagles born in the United States every year don’t survive a full-year. “Twenty five percent don’t make it through the second year,” he said. “It’s important to keep them protected as they have a bad survival rate. Existing canals and concrete wall also pose a threat to eagles in flight.”

Welcome Back to the Nest is one of two special events staged by MESF, The second, Nest Fest is held in the spring. For additional information, visit their website at marcoeaglesanctuaryfoundation.com.