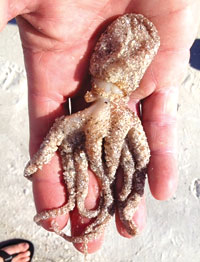 Mike Richie holds a pygmy octopus before gently tossing it back to sea.

The week of November 25 through December 1 was a strange week on the beach for many of the city’s volunteer beach stewards. A recent storm front and some odd activities led to an unusually large amount of marine mammal life to be washed ashore on Marco’s beaches.

First up, octopi. In one day, a beach steward found eight stranded on the shore as he monitored the beach. Another one was found on Sand Dollar Beach in the same week. Of the nine, six were still alive and were able to be returned to the water. These octopi were small in size, only about six inches or so.

Commonly found close to shore and throughout Florida, the Caribbean Sea to Guyanas, Bahamas and the West Indies, the scientific name for these invertebrates is Octopus joubini. Commonly, they are referred to as the Atlantic pygmy octopus.

Small in size, the pygmy octopus is not poisonous, but does have a beak in the center between its eight tentacles that can cause a bit of a bite. If you see a live stranded pygmy, it is recommended that you gently pick it up by its bulbous head and gently toss it back into the water. If it does catch a quick bite, simply wash the bite and clean it as you would any other small injury.

Next up: dead hammerhead sharks. Environmental Specialist Nancy Richie noted that since May about a dozen dead sharks have been found on the beach. During the above stated week, two hammerheads were found dead on the shore. Richie and many others believe the causation is due to improper catch and release methods. “Many people out fishing on the beach don’t realize how easy it is to catch a small to mid-size shark there. They aren’t prepared for the catch and are scared to unhook the shark.” Fishing at night makes a shark catch even more likely as that is their feeding time.

“Sharks are tricky when caught,” adds Richie. “Unfortunately, these sharks didn’t just wash up on shore, they were probably left to die.”

According to FWCC, to increase shark survival rates, the proper catch and release methods are:

• Use tackle heavy enough to land a fish quickly to reduce exhaustion, which could result in its death or weaken it making it more vulnerable to predators. (Prohibited species that die while on the line after being caught in state waters should be returned to the water.)

• Release the fish while it is in the water when possible.

• Use a de-hooking device to remove hooks safely.

• Use non-stainless steel hooks – these hooks can dissolve if they remain in a fish.

• Use non-offset circle hooks when fishing with natural bait to avoid gut hooking a fish – circle hooks tend to hook fish in the jaw, making them easy to remove.

• Bend barbs down on hooks so they can be removed with less damage to a fish.

Finally, pen shells. All three of the varieties found here in Florida, were found dead on the beach. According to Richie, “they are bivalves distantly related to mussels. They are filter feeders that live in colonies, anchored in soft sediment of the Gulf out to about 20 foot depths.” They were likely washed in by the storms as were the octopi.

As for the pilot whales stranded near Everglades City we’ve all heard about in the past few weeks, they came along just after the activity on Marco. It is a mystery as to why pilot whales – or any whales for that matter – beach themselves. However, among the possible reasons are disease and environmental factors such as red tide and weather patterns.

Whether it’s the weather or some other odd cause, these incidents are all naturally occurring, yet not necessarily common – other than the dead sharks, of course. Luckily, a majority of the pilot whales and pygmy octopi were able to survive thanks to the watchful eyes of their human counterparts.