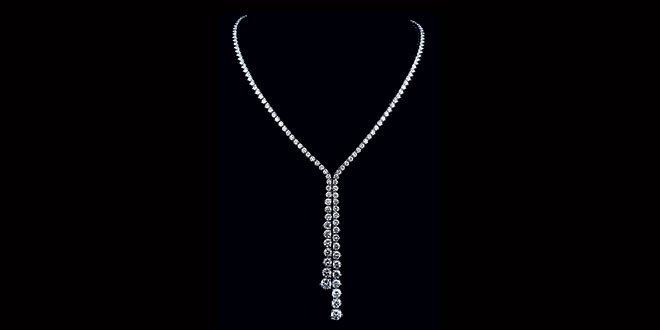 Kids are back in school and the September doldrums are in full swing on the island. To avoid the pain and anguish of a Marco September, I am enjoying a well-deserved vacation sunning myself with a pitcher of iced sangria overlooking the Mediterranean here on the southern coast of my other beloved island…
Mallorca, Spain.

This past summer I endured a few slow weeks, and my shop took a lightning strike or two plus near flooding, but all and all my little goldsmith shop on Marco Island kept busier than most other summers I can recall; a sign of things to come? I hope so.

The last project I accomplished was in a single word, “phenomenal.” The word “spectacular” comes to mind also. A wonderful client, who happens to like important diamond jewelry and the work that I do, wanted a truly spectacular diamond necklace, not just a single stone bling, bling pendant and certainly not the same ole same ole typical tennis bracelet style necklace. I knew it had to be different, in fact, unique!

It began that way…different from the very start. I laid out the design, beginning with large round diamonds and slowly graduated to smaller sizes of exquisitely white and flawless Belgium cut brilliant round diamonds.

I suggested a bolo themed design that flowed over the shoulders and then would meet in a kind of upside down “Y” with one leg longer than the other. All the links would also have to be fluid and movable in all the right ways, and the diamonds would continue from one end of the clasp to the other.

On paper it was a great design but it had to hang properly in precious metal. I used 14kt. white gold with the fine diamonds.

The piece was made from scratch and took around six weeks to complete from start to finish. The most difficult part was matching the diamonds. This piece was literally tailored to fit and lay
perfectly.

As I put the final touches and high-polish on my diamond creation there was a lightning storm outside that was shaking the shop so much I couldn’t help but notice. It was then that I realized I was holding a piece of lightning in my hand. The brilliance and fire radiating from the necklace awed even me. It was a very proud, moving moment for me indeed.

I then had to Fedex the necklace up north to the new proud owner, and I acquired more grey hair nervously waiting for the delivery confirmation and the customer’s reaction the next day. I called to affirm the delivery; she was near speechless, which was exactly the reaction I was hoping for.

I had other custom pieces I completed and was equally proud of, but my “Marco lightning necklace” was emotional to me, this necklace actually had a soul, besides a spectacular presence.

I experienced that phenomenon when I stood in front of the Hope Diamond at the Smithsonian Institute. Can a piece of jewelry have a soul? Can it speak to you? Well they speak to me. Am I ready for the rubber room?

Last year I restored what appeared to be a man’s non-descript sterling silver I.D. bracelet. It turned out to be far from non-descript. This woman’s grandmother gave the bracelet to her grandfather as he left New York City on his way to storm the beaches of Normandy to free Europe from Nazi tyranny, and he wore that bracelet through the end of WWII. The top of the I.D. was engraved with his name, rank and serial number, but the back said simply, “Come home to me!” And come home he did, without a scratch. He also lived to a ripe old age with his sweetheart and had lots of kids and grandchildren.

If this bracelet could talk it would have spoken volumes. If any piece of jewelry had a soul this bracelet oozed one. It had an effect on me the whole time I had it in the shop, and especially when I worked on it. Both of us were filled with emotion when the granddaughter returned to pick up the restored bracelet.

You might think this sounds crazy but some antique jewelry pieces have giving me weird vibes while in my custody. The experience defies explanation sometimes. I once worked on an old Victorian-era ring that literally fought me tooth and nail throughout the restoration. Whatever could go wrong went wrong — it took way too long to complete the job. I found out later that it belonged to an aunt who was a bit of the black sheep of the family because she supposedly practiced witchcraft with a cult in Salem, Massachusetts. No wonder! Boy was I happy to rid my shop of that ring.

To this day I can never understand why some people will sell, scrap or even throw away old family memorabilia, whether it is jewelry or not. I cherish the few family heirlooms I have. And yes, to me they all have a presence and a soul.

Richard Alan is a designer/goldsmith and owner of The Harbor Goldsmith at Island Plaza and welcomes your questions about all that glitters. Contact him at 239-394-9275 or harborgoldsmith@comcast.net, or visit his informative website at www.harborgoldsmith.com.