WE WILL NEVER FORGET 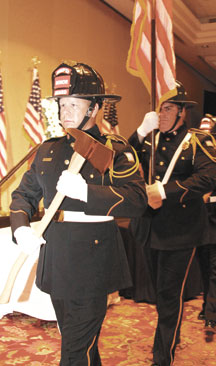 The Marco Island Fire Rescue Foundation sponsored a “Celebration of Courage” on Sunday, September 11, 2011 in honor of 9/11. Dave Elliott, Radio Host of WGUF 98.9FM, Master of Ceremony, welcomed the guests to the beautifully appointed Palms Ballroom of the Marco Island Marriott Resort, Golf Club and Spa.

The Posting of Colors was presented by the North Naples Fire Department Color Guard. The Star Spangled Banner was performed by Mariel Sanchez, a student at Marco Island Academy. Rev. Dr. Kyle Bennett offered an invocation.

Dianna Dohm, president of the Fire Rescue Foundation, acknowledged the work of its members and in particular, the committee members who planned the 9/11 event. Her employer, Mutual of Omaha Bank, surprised her with a donation of $1,000 to the Foundation.

Rick Medwedeff, General Manager of the Marriott, welcomed his guests and recalled the destruction of the Marriott Trade Center Hotel ten years ago along with the devastating loss of the twin towers and other buildings on or near the site of the tragedy. He commented on the 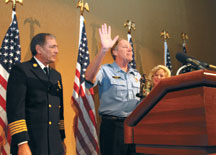 outpouring of help by Marco Marriott employees for their colleagues in New York and the coming together of all Americans on our day of sorrow ten years ago.

Two videos developed by Bill Hughes, “We Wll Never Forget” and “Celebration of Our Heroes” were shown and brought us back to exactly where we were on that awful day, how shocked we all felt as we witnessed unbelievable sacrifice, loss of life and destruction. Never doubt, we will never forget, we will remember forever.

Retired Detective Dennis Bootle of the NYPD was guest speaker. He and his team were in their offices on the other side of the Brooklyn Bridge and witnessed the first plane fly into the North Tower. The group believed they had witnessed a tragic accident which would be handled by their colleagues across the river who were closer and would be properly attired and equipped for the monumental rescue task before them. When the second plane flew into the South Tower, they knew this was an intentional act of terror and raced 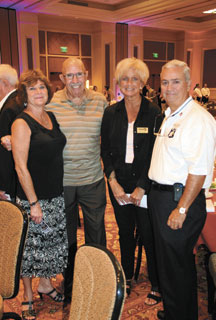 across the bridge to do whatever they could.

One of the first people they encountered was NYFD Chaplain, Father Mychel Judge who gave them his blessing. They raced to enter the building but were held back by firefighters who told them there was no way into the inferno.Desperate people on the top floors began jumping to escape the flames and Fr. Judge died of a heart attack following impact of one of the falling victims.

For weeks and months after the attack, NYPD coordinated thousands of hours of searching to retrieve every possible body. They climbed fractured framework, dug down seven stories and risked fires breaking out around them to bring out whatever remains could be found because they knew even one bone made it possible for DNA analysis and identification. To a grieving family the discovery meant the possibility of a memorial and some consolation about their loved one.

Marco Island Fire Chief Michael Murphy praised the Fire Rescue Foundation for making the day one of remembrance and also a celebration of life. In keeping 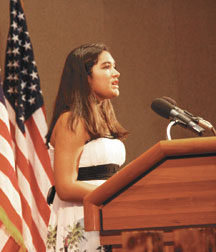 with the theme of celebration he presented the 2011 Firefighter of the Year Award to “Happy Jack” Firefighter Stephen Fickling. Fickling, an engineer, is a Hazardous Materials technician, an EMT and coordinator and a trainer for the Community Emergency Response Team. Chief Murphy described Steve as a man with a big smile who is deeply spiritual and has been a resource for his colleagues in the department.

Dianna Dohm closed the memorable afternoon with a tribute to Jim Curran for coordinating the videos presented during the luncheon and a final video offered a glimpse of Tower One which will rise to 1,776 ft on completion. The structure will resemble the original towers from certain angles and from a different perspective will reflect the obelisk design of the Washington Monument.

America is a country built on freedom. The World Trade Center, a treasured icon of our freedom will rise again as a symbol of our unique liberty standing tall as a forever part of the beautiful, New York City skyline. It is named the Freedom Tower and projected to open in 2013.