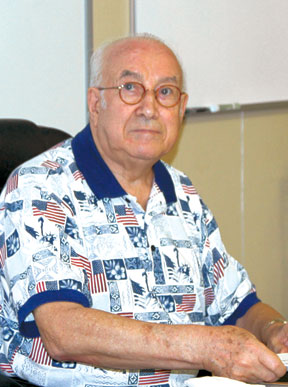 Living testimonials from Holocaust survivors are themselves becoming an artifact of history, so Abe Price’s story was recorded by Marco Island Academy Students as they witnessed it. Like the tattoo on his arm, his anger is still fresh 70 years later, and he displayed both proudly to the room full of students and faculty. History teacher Amber Prange hoped the lesson hit home. “It can be difficult for kids to connect with history, so hopefully this helps make it real.”

Like your average Marco teen, Price knew a comfortable middle class upbringing until the Nazis invaded his home city in Kelsa, Poland when he was 16. The Jews in the city were herded into a ghetto, where disease and brutality stripped inhabitants’ humanity away. “Do you know what it feels like to

be hungry for weeks at a time?” Price said that many resorted to eating grass but “within six months all the grass was gone.”

In 1942 the ghetto was liquidated. “They used pregnant women and babies for target practice.” Price’s family was separated into cattle cars. His father’s last words to him were “live and get revenge.” Those words drove Price to escape five times from work camps throughout Poland before he was transported to Auschwitz, where he got off the cattle car and was sent to the showers. “I got water and not gas.” Auschwitz, as described by Price, was an unimaginable hell where the Nazis played band music as people were sent to the gas chambers. Prisoners were identified only by the number tattooed on their arm and worked 12 hours a 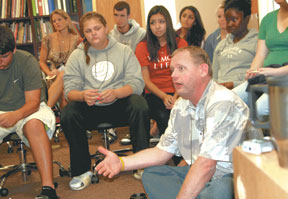 In the beginning of 1945 the Nazi initiated the Final Solution to finish their mission of eradicating those left in the death camps as Soviet soldiers moved closer. Price liberated himself during the Auschwitz death march. Snow covered their tracks as he and a friend ran away to a barn where they hid without food or water for five days. The German woman who lived there risked punishment by death to feed them and give them civilian clothes, and sent them on.

“In the Bible it tells us that God came to liberate the Jews from Egypt, but there was no God [during the Holocaust].” Like so many other survivors, Price turned his back on Europe and immigrated to America with his wife, two sons and two suitcases, and took work 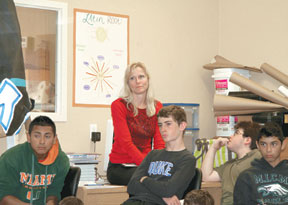 in a commercial bakery. “This truly is the best country in the world.” Of the 28,000 Jews in Price’s once vibrant home city, only seven survived. The Cold War immediately followed upon the heels of WWII, allowing many Nazis escape into a new background of chaos. Bitterness and rage are vividly alive in Price each time he recounts his story. “I vowed to bear witness and never forget. It is my mission.”

The students, who are studying issues of social justice along with history, were given a powerful look at both through Price. “We’re looking at the role of hatred and how it feeds genocide and terrorism [today]… “I try to teach [my students] that their thoughts and words matter. Your power lies in your thinking.”