Wayne Bryan and the USTA 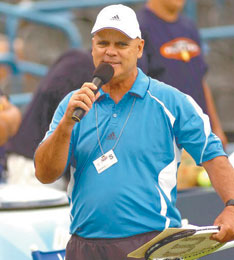 If you have time and a lot of patience, and perhaps some perseverance, tennis coach/author Wayne Bryan (father of successful twins Bob & Mike) offers a number of strong opinions about the United States Tennis Association and college tennis. To be fair, I am an acquaintance of Mr. Bryan and I have spent considerable time talking tennis with him over the past ten years or more. He is a refreshingly honest, passionate man who has earned the privilege of offering keen insights about the state of the game today. Wayne Bryan’s book, “Raising Your Child To Be A Champion In Athletics, Arts And Academics,” has been a successful guide for parents. Currently, Mr. Bryan travels a minimum of 150 days each year covering myriad tennis events: He acts as master of ceremonies at innumerable pro events, conducts clinics and, most important, watches his sons dominate the ATP doubles tour. Here are examples of some of his recent quotes:

• “Champions are not created by million dollar slick ad campaigns! Tennis will never grow from Madison Avenue! It grows from Main Street. Local parents. Local groups of kids getting going. Local parks. Local schools. Local clubs. Local coaches. Tennis grows from solid and fun and dynamic programming and charismatic parents and coaches and club pros. It grows with bells and whistles. With energy and enthusiasm. With fun”.

• “This is the big elephant in our tennis living room. The USTA has never taken a stand on this. They even put out a White Paper saying basically that there is no problem. I chaired a panel discussion on this two years ago and the four USTA Staffers at the table all said American kids are ‘no good’ and ‘lazy’. Huh?! There are several million dollars in tennis scholarships going to foreign players whose parents do not spend dollar one in taxes for education in this country. In this dire economy this is unconscionable it seems to me.” (Mr. Bryan discussing the state of men’s college tennis.)

• “With 65% of the players being from overseas, it is criminal and most of all, it is a crying shame that American college tennis is now a world class sport. It should be for our American youngsters to enjoy and to derive the wonderful benefits. Are those parents of the players from Europe and Asia paying taxes to support UCSB and all the other colleges in this country? To ask the question is to answer it”. (Mr. Bryan continuing his unhappiness with the American college tennis system.)

• “Reducing all those coaching salaries and there could and should be a fabulous junior WEB Sites, where you could find any junior singles or doubles rankings for any age group and any sex in any section. It should be a storehouse for records. Articles. Pictures. Upcoming events. Reducing those massive staff expenditures and you could make every entry fee in America half of what it is today, maybe even free. You could give every kid who could not afford it a racket. Maybe even a club membership. Lessons. Shoes. Reducing those massive staff expenditures you could send the top 1,000 ranked juniors in the US to the Davis Cup, the Fed Cup, and the NCAAs.” (This is Mr. Bryan opining about his view of excessive USTA salaries paid to the people who are running tennis.)

In all of my tennis experience, I cannot support our player development program since it has not produced one Grand Slam champion in the last 23 years! Whether I am at a USPTA convention or at a pro league match at the Player’s Club, pros are keenly aware that our USTA player development program, now headed by Patrick McEnroe, has been a disaster. Moreover, Patrick McEnroe is rumored to earn over one million dollars annually and his other top pros, Jose Higueras and Jay Berger receive well over a quarter of a million dollars each year.

At last September’s USPTA convention, I made a point to go see our featured player development trio (Patrick, Jose and Jay) and they failed to get the crowd excited. They methodically presented their plan and then conducted drills that lacked passion and fire. On the other hand, when Wayne Bryan is on court coaching drills, he never fails to inspire. I’m sure when he views the player development pros in action; he shakes his head with bewilderment. As far as the new 10 and under initiative is concerned, Wayne Bryan is probably skeptical because he thinks this new idea is unnecessary (the new tennis courts are about half the size of the original, smaller rackets and green colored tennis balls are part of the big changes). Furthermore, hundreds of current tennis coaches have been bending his ear about this far-fetched idea.

However, I need to know what the ultimate goal is for the new 10 and under program before I criticize it. Tennis and golf are tough games to learn and, if we have new ideas that could encourage more youngsters to take up tennis and stick with it, perhaps it could be a great plan? In summarizing Mr. Bryan’s concerns, the 10 and under initiative needs valuable time to see if it works or not before we judge it too harshly. If you are a tennis enthusiast like me and wish to read Mr. Bryan’s entire letter to the USTA, please go to www.collier-tennis.com