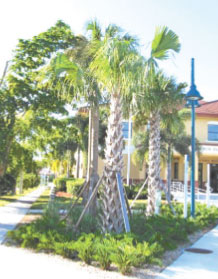 The planting area near Marco Island’s City Hall demonstrates how to use native plants in a natural landscape to provide a beautiful reminder of Florida, and food and shelter for wildlife. They also conserve water as an added bonus to the normal more waterintensive landscape plantings.

So how can native plants improve a landscape? First and foremost, they’re already growing in our climate. They’re surviving on whatever moisture is provided by rain. They can withstand the salt, heat and cold. For the most part, they’ve developed natural mechanisms to thwart bug and disease problems. Sort of a plant version of survival of the fittest! An added benefit is that they provide food and shelter to wildlife of all kinds.

It’s a win-win for the community and the environment.

The Marco Island planting project is considered to be a Coastal Design, i.e., one consisting of plants such as the Sabal Palm and the Saw Palmetto and Coontie, found throughout Southwest Florida. These plants have adapted to a tougher environment that lends itself to survival. The native Saw Palmetto, Sabal and Coontie thrive in natural soils and natural rainfall and look very handsome once established.

Because many native plants don’t jump out at us as we drive or walk past them, we literally don’t see them. We therefore don’t have a point of reference when we go looking for them in the nursery. When you ask people to reduce water in their landscaping, Michael Spencer, of MSA Design remarked, “They say, ‘Yes!’! When you tell them to reduce sod by 70% they get glassy-eyed.”

However, plant species used in this planting demonstration project were selected for their adaptation to the severe salt environment and also for their form, color and texture. There is a contrast between the shiny, dark green Coontie and the waxy blue Saw Palmetto that is striking. The design is both functional and attractive, and it also saves about 70,000 gallons of irrigation water, as calculated by Nik Nikolich of the Big Cypress Basin Mobil Irrigation Lab. Nik commented: “Using waterwise landscaping goes a long way toward protecting our scarce water resource.”

Jim Hodgdon, City of Marco Island Parks Superintendent, said, “The demonstration planting area avoids about $960 in weekly labor, fertilizing and mulching quarterly, and the installation costs were estimated at $2,340 for a 900-square foot planting area” suggesting that major annual cost savings are possible in a number of areas. This landscape design incorporated shell, a great mulching material for the island with its natural appearance and lack of decomposition like wood chips.

“It looks great and saves dollars,” said Tim Nance of Gro Technics, who acted as project Horticultural Consultant. “We didn’t want to be able to say, ‘Our plantings are just as nice as theirs’, nor did we want to say, ‘See, native plants are not so bad!’ But, this is exactly where the battle of supplemental water is fought. Until agencies and the public get this point, progress will be slow,” said Michael Spencer, of MSA Design.

The issue of appearance is important. So far perception of the Marco Island Planting Demonstration project has been favorable. “Requests for permission to install native plants at residences have increased” said Nancy Richie, City of Marco Island Environmental Specialist. “Without maintenance, the waterwise landscaping has shown vigorous and healthy growth. Plantings are free of pathogens that might adversely affect their growth or normal development; they are without irrigation and yet their growth has met our design criteria,” said Michael Ramsey, President of Ramsey Inc., Environmental Consulting.

All in all, this demonstration project has “demonstrated” that waterwise landscaping can conserve water, minimize costs and present an attractive natural Florida appearance.