Water Workouts at the Y 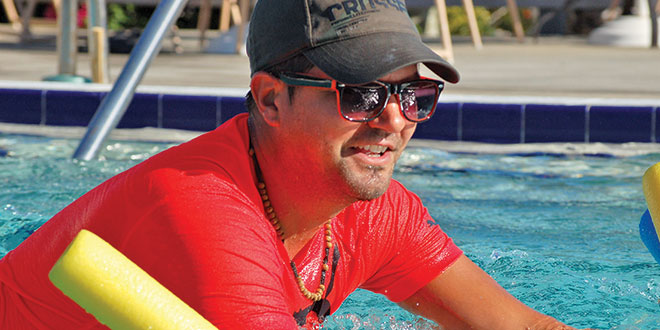 Instructor Gustavo Sita puts a class through one of the resistance moves.

At the start of one of her Aqua-Zumba pool workout programs at the Greater Marco Family YMCA, Aqua-Zumba in- structor Doris D’Agostino tells participants this isn’t about overexertion.

“Burning is good, pain is not good,” D’Agostino says before conducting her class with infectious enthusiasm. She goes through her moves outside the pool, and clearly enjoys the solid 45-minute session. 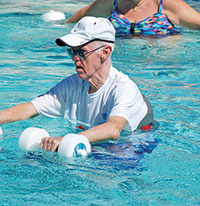 John Matthews goes through his paces in the Y’s Parkinson’s program.

She emphasizes that physical exercise and diet go hand-in-hand.

“This class burns about 600 calories,” she says.

In addition, she also makes it clear that participants don’t necessarily have to be good at dancing.

“This is about moving at half tempo,” she says. “Wearing water shoes also helps gliding along the bottom of the pool and doing the steps.”

Aqua-Zumba convert Terry Helwig speaks highly of D’Agostino’s class.
“I love it,” she says. “It’s a great way to exercise in summer when it’s so hot, so I come whenever I can. She (D’Agostino) is a very vivacious teacher, and makes the exercise a lot of fun. The resistance of the water makes it like dancing with weights on.”

You could call the Aqua-Grove, 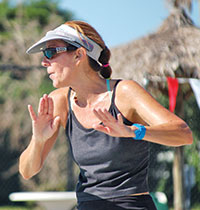 Aqua- Zumba and Rock Steady Boxing Parkinson’s programs graceful workouts that take place in a shallow section of the pool. Throw in some camaraderie along with attraction of working out in near weightlessness, and it’s easy to understand the popularity of these routines.

Nancy Stolliker participates in the Aqua-Grove and Zumba programs three days a week, and says the benefits are un- deniable.

Aqua-Grove and RSB Parkinson’s pro- gram instructor Gustavo Sita has a back- ground in physical education, and con- ducts his classes with a mixture of light-heartedness and encouragement as he puts participants through their paces.

This summer he took the Rock Steady Boxing Parkinson’s program to the pool.

Since then he has seen a significant difference in the mobility of participants.

He uses apparatus like noodles and dumbbell-shaped floaties, which create resistance when pulled through the water. “It’s better for muscles and joints than working out on land,” Sita says. “Your body weight is only about 10 percent in the water, and for people with hip or knee problems it allows more mobility. (Participants) are improving all the time, becoming stronger and looser.”

“Mobility is the greatest benefit of working out in the water. Participants also need land exercise to improve their strength,” added Deborah Passero, Healthy Living Director and exercise physiologist.

Sharyn Kampmeyer, Karen Lombardi, Anne Marchetti and Stolliker, all of whom clearly enjoy the session.

Long-time Y Zumba instructor Doris D’Agostino is every bit as enthusiastic and animated as Sita, getting a heck of a work- out herself as she leads her class from out- side the pool.

She also uses assorted apparati, not least rubber Pilates rings which participants squeeze to create resistance by way of isometrics.

Later, instructor Sita returns to the pool to guide Parkinson’s disease participants and in some cases their caregivers, through a series of moves intended to bolster their motor skills.

“We do varying levels,” Sita says. “The aim is to improve strength and speed, and we do assessments every three months. Usually we notice improvements. This is definitely one of our best programs.”