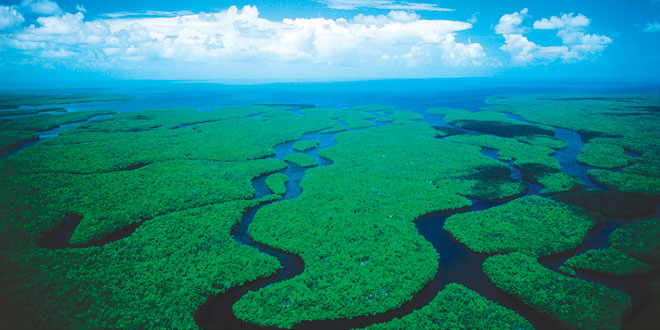 From the freshwater rivers of Alabama and Georgia that flow into our state to the rain produced sheetflow of central Florida and the showers The Everglades send to our local area, there is a consistent supply of clean water for us to enjoy and utilize. More than 100 rivers crisscross our state; many of which are protected and preserved. These tributaries nourish the surroundings and give us the beautiful and diverse landscape we enjoy today.

The panhandle region and extreme northern border boast lush forests that provide a home for deer, bear, turkey and a variety of migratory birds. The Perdido (Alabama-Florida border), Escambia and Apalachicola rivers (Florida’s largest river) are all significant natural resources. The Apalachicola River has the highest diversity of reptile and amphibians in North America, north of Mexico. Prehistoric Indian sites, middens (trash heaps) and burial mounds have been found along many of the area rivers. Nomadic hunters inhabited the region as far back as 14,000 years ago.

In Central Florida, the Suwanee River flows for 245 miles from Georgia’s Okefenokee Swamp to the Gulf of Mexico. It is the last major undammed river in the southern United States. Wildlife is abundant here as well, including the black bear which use the river corridor as a traveling and foraging route.

Contributing to the Suwanee is the Santa Fe River and its 27 springs. As is the case with many northern rivers, the Santa Fe will disappear underground. Because of the state’s karst (porous limestone) geology, these rivers will travel below the surface and emerge again at some distant point to continue their flow. This type of geology lends itself to water bubbling up from the aquifer below creating many springs and seeps.

Springs and seeps are places where underground water that is under pressure discharges through a natural opening in the earth surface. Our state has more than 300 springs — one of the largest concentrations in the world.

So what is an aquifer? Skeletons of coral, shellfish and fish piled up on the bottom of the sea for millions of years. This created a layer of limestone hundreds, in some places thousands, of feet thick. As the Appalachian mountains eroded, sand and clay were deposited over this limestone layer. As the sea level fell to reveal today’s landscape and because limestone is porous, water gradually dissolved the rock and formed cracks, passages, and underground areas that could hold large amounts of water. Water moves freely through this system, and it holds the ground water like a sponge.

The Floridan aquifer system is one of the most productive worldwide and underlies an area of about 100,000 square miles in southern Alabama, southeastern Georgia, southern South Carolina and all of Florida. It provides nourishment for several large cities, many smaller communities and rural areas. In 1985 alone, an average of 3 billion gallons per day of freshwater was drawn from the Floridan for all purposes — a stepping stone for modern civilization.

The water stored in an aquifer is replenished by rainfall. On average, Florida receives 51 inches of rain each year. Not all of the rain reaches the aquifer. About 38 inches either evaporates or runs off the land into lakes and rivers before it has a chance to soak into the ground. This leaves 13 inches annually to recharge the aquifer.

The Floridan aquifer averages 1,000 feet thick, and freshwater can extend to a depth of 2,000 feet below the land surface. This system is thickest in the central portion of the state and thins rapidly toward the coasts and the south.

The south…close to home….the Everglades. There was an historic flow of water for thousands of years from the Lake Okeechobee region into southwest and south central Florida. Thinking we might be doing better things, man changed that flow with the development of lands, dredging of canals and the attempted drainage of the everglades to “make it a better place”.

The current flow pushes water primarily to the east coast, and to the west, it runs through the Caloosahatchee River to the Gulf of Mexico. Very little of this previous sheet of water now makes it to the Everglades. This pump system made by Mother Nature a long, long time ago has been altered. It’s not nice to mess with Mother Nature.

In days gone by, rivers swelled by steady rains would empty into the lake. Excess water, following the path of least resistance, would overflow at the south end of the lake causing a consistent push to the south and southwest and providing nourishment for the land known as “The River of Grass.” This took thousands of years. Just in the last 100 years or so, the residential, commercial and agriculture growth and development has caused this path to alter. Hopefully, projects like the Comprehensive Everglades Restoration Project (CERP) and other programs can help recreate what Mother Nature had planned — a major stepping stone.

Overall, the Florida waterways are still magnificent. They are a treasure to enjoy from the northernmost rivers to the Florida Bay. They are filled with a history of the past and a preview of events to come. We just need to understand them. We need to embrace the change that has taken place, naturally, over time, and learn how to adjust to this. From the ancient mariners of 14,000 years ago to present day travelers, these resources were meant to be utilized responsibly. Let’s do that. Let’s create the next stepping stone for Mother Nature’s master plan and make it our own personal passion.

Bob is a Florida Master Naturalist and a member of the Dolphin Explorer’s 10,000 Island Dolphin Survey Team. He is a member of Florida SEE (Society for Ethical Ecotourism) and a U of Fl certified Python spotter. Bob loves his wife very much!