Watch Out For Migrating Manatees! 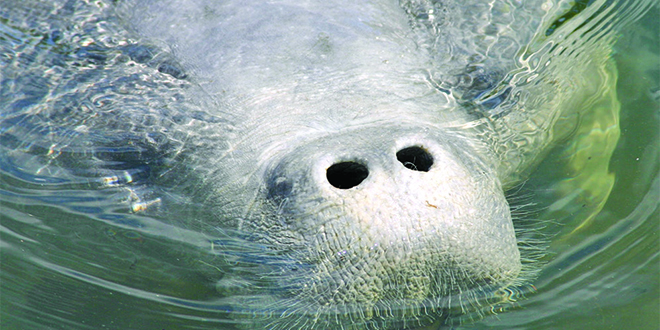 Manatee numbers are up and these bulky aquatic mammals are on the move this month! The annual migration of Florida manatees begins in November, as the weather cools and Manatee Awareness Month is celebrated.

Watch out for manatees swimming in Florida’s rivers, bays or coastal waters. Keep in mind this time of year manatees are searching for warmer waters to help them survive winter’s cold.

With the onset of the manatee migration, the Florida Fish and Wildlife Conservation Commission (FWC) reminds people in boats and personal watercraft to slow down to avoid manatees, particularly in shallow areas. Many seasonal manatee protection zones also go into effect as of November 15.

Adult manatees weigh about 1,000 pounds but can be difficult to see, especially when just below the water’s surface. Manatees are easier to spot if boaters wear polarized sunglasses and keep a lookout for signs of manatees such as the circular “footprints” they trace on the top of the water. Manatee numbers are up. In February 2016, the FWC announced 6,250 manatees were counted in an aerial survey of Florida waters. While that is good news, there have been 91 manatee fatalities caused by boat strikes so far in 2016.

“Boaters who slow down and keep a lookout for Florida manatees are an important reason the overall population of this species is doing better,” said Carol Knox, leader of the FWC’s Imperiled Species Management section. “Remember, it is especially important to watch out for manatees during Manatee Awareness Month in November, as they begin their annual migration to warmer waters.”

The FWC spends about $2 million a year on manatee conservation, including research, rescue, management and public education efforts, and works in partnership with agencies such as the U.S. Fish and Wildlife Service on manatee issues. Floridians contribute to manatee conservation when they purchase the “Save the Manatee” license plate at BuyaPlate.com or donate $5 for the manatee decal.

For information about manatee protection zones by county, including the seasonal changes, go to MyFWC.com/Manatee and click on “Data and Maps.” At the bottom of that same page, there also is information on FWC Manatee COLD-weather changes to speed zones. FWC law enforcement officers will be on the water enforcing these seasonal rules to protect manatees in busy boating areas.

Report sightings of injured, sick or dead manatees to the FWC’s Wildlife Alert Hotline at 888-404-3922, #FWC and *FWC on a cell phone, or with a text to Tip@MyFWC.com. Want to see a manatee? Go to MyFWC.com/Manatee and click on “Where can I see Manatees?”