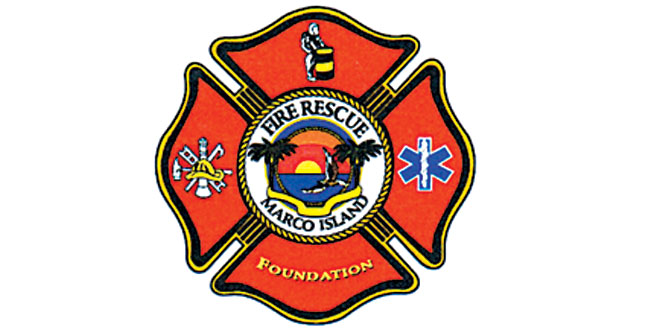 The fire departments on Marco Island and Isles of Capri are in emergency mode. Both have concerns about the advanced-life support ambulance services stationed in their fire-rescue districts by Collier County Emergency Management Services.

Marco Island wants a second ALS ambulance, and Isles of Capri wants to keep the one it has. Questions about the fate of Capri’s Medic 90 rose weeks ago during a special meeting of the Isles of Capri Fire Advisory Board. While the main topic was the proposed consolidation between Capri and the East Naples Fire Control and Rescue District, the conversation quickly turned to murmurings and fears of losing the ALS ambulance.

“The ambulance is not a technicality,” said board member Matt Crowder. “It is not something that is in the margins. We want to maintain our ALS ambulance service.”

Capri Realtor Jeri Neuhaus agreed: “The fight now is to keep the ambulance. The ambulance is our issue.”

As such, the city council voted by a narrow 4-3 margin to put the new hires on hold, with councilors Chuck Keister, Larry Honig and Larry Sacher voting in dissent. Instead, the council agreed to tuck the money already budgeted for the salaries into the city’s asset replacement fund. If the city is successful in its bid for the ambulance, the money will remain in the fund. If not, the three personnel still could be hired.

Additionally, Petricca will sit down later this month with Collier County EMS to discuss the probability of stationing another ALS ambulance in the Marco Island Fire-Rescue Department. “Based on population and physical location, we deserve at least one more, possibly two, (ambulances) from the county,” Petricca told his fellow councilors at a recent public meeting.

The most staggering and impressive part of these statistics: The MIFR handled all of these calls with just six more employees than it had in 1998. The results — a stronger reliance on mutual aid from other fire districts in Collier County and increasing emergency response times — trouble Murphy, though. In 2012, 543 of 2899 incidents on Marco Island required off-island assistance, and in some of these cases, island residents waited as long as 29 minutes for help.

According to Collier County EMS, calls are up for its ambulances stationed on both Marco Island and Capri as well. Marco Island’s Medic 50 had a marginal 3 percent increase in calls 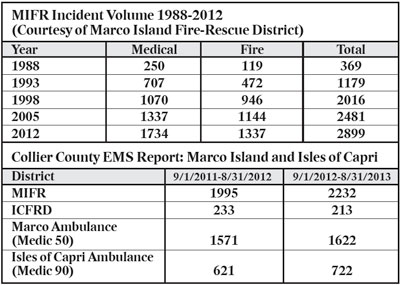 in the last year, while Capri’s Medic 90 saw a more than 16 percent increase.

Why is the ALS ambulance so important? According to Collier County Emergency Management Services Chief Walter Kopka, an ALS ambulance provides top-tier emergency medical care in the field. Vital signs, bandages, blood sugar testing, oxygen masks, medications, breathing tubes and heart monitors: You name it. The ALS ambulance can do it.

On both Marco Island and Capri where cardiac problems, seizures and respiratory emergencies are a common occurrence, an ALS is not just important. It is mandatory. The county has 23 ALS ambulances already stationed at fire houses throughout its six dependent and two independent fire districts, so having two on Marco Island would be a coup.

Each ambulance is staffed with two paramedics. In fire districts participating in the county’s SWAP program — Marco Island, Capri and Ochopee Fire Control and Rescue District — the ambulance personnel are fire fighter/paramedics, allowing one county paramedic to ride on the fire engine, while one of the district’s fire fighters rides in the ambulance. “This makes the engine an advanced life support apparatus as well,” notes Kopka.

Murphy admits this program gives MIFR a boost when it counts the most. “We benefit unlike anywhere else in the county (from SWAP) in that the two county personnel assigned here everyday are fire fighter/paramedics,” he says. “When we have a fire call, the county personnel will actually fight the fire and commit to the fire scene. There is a cost benefit to us.”

For Petricca, this makes the second ALS ambulance all the more valuable, and even Murphy believes Marco Island has a good chance of securing it. He insists the increase in calls and the data accumulated will help make the case for both the ambulance and three new fire fighter/paramedics.

“(Another ambulance) doesn’t take away the need. One person a day is a good investment… We’re not building empires… As a city, our fire risk factors have grown exponentially,” Murphy adds.

To be sure, the data will be compared to the county’s Annual Update of Inventory Report (AUIR), which allows the Board of County Commissioners to set its levels of service based on a variety of factors including number of calls, types of calls, driving routes and response times. For example, the BCC has adopted a level of service that calls for an 8-minute response 90 percent of the time in the urban areas and a 12-minute response 90 percent of the time in the rural areas.

“From my perspective, EMS is a system that must be reviewed and analyzed in its entirety and not unit by unit nor station by station,” explained County Administrator Len Golden Price, who manages EMS for the BCC. “When assessing where to station our ambulances, we take into consideration the entire system and the impacts of any potential change on the system as a whole. These decisions are not made easily nor taken lightly.”

In the end, where Marco Island’s second ambulance would come from is anybody’s guess, but Kopka indicated that Capri’s ALS ambulance is probably safe. “Capri is our second lowest call volume of all stations,” he noted. “I would like to look at making sure there is some type of ALS service there because it is an island. There is only one way in and one way out, and it makes it more difficult to get there in an emergency situation.”