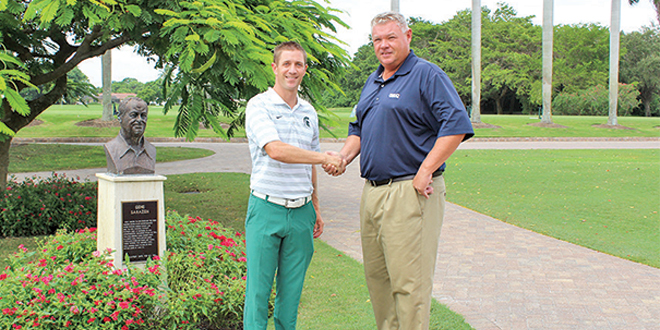 Walter’s golf career began as a caddy, working at the Point O’ Woods Country Club in his hometown of Coloma, Michigan. Over the years Walter honed his skills as a player and his passion for the game.

In 2007 Walter graduated from Michigan State University with a degree in Finance. He made his way down to Marco Island in 2009 and began working seasonally, dividing his time between the Island Country Club and the Lake Michigan Hills Golf Club in Benton Harbor, Michigan. In 2010 he found his permanent home at the ICC, becoming a full-time Assistant Golf Professional.

Walter is a Class A PGA member. Recently, he was honored as a finalist for the Assistant Golf Professional of the Year Award in South Florida. “I feel very fortunate as a golf professional to have spent six years working at the Island Country Club,” said Walter Kroschel. “It has an amazing membership, a great culture, and a wonderful staff.  I look forward to continuing my career as the Head Golf Professional.”

Throughout his years at the ICC Walter has become accustomed to the Southwest Florida climate. Whether it’s rain, humidity, or a downright windy day, Walter has a solution. Here are some tips from Walter on how to play your best on a windy day.

Windy days are very common in Southwest Florida. But don’t let that ruin your day on the course! Here are a few tips to keep in 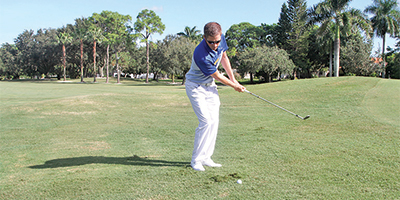 Walter demonstrating how to swing the club properly on a windy day.

mind when the wind is blowing.

Swinging hard and trying to fight the wind is the worst thing you can do. People who play the best in the wind focus on swinging smooth and hitting solid shots. A solid golf shot will fly true in a stiff breeze, but an off center shot has no chance when it’s windy.

When the breeze is in your face, take the advice of hitting an extra club or two over trying to hit the ball a little harder. When you take the extra club, swing closer to 80% to create a lower ball flight and less spin. Keep in mind, when you swing a club faster you create more spin on the golf ball, which will create a higher ball flight.

Play the ball an inch or two further back in your stance than a normal golf shot.  Add this tip to an 80% swing and watch the ball fly lower and penetrate the wind better.

Left or right winds will move a ball flight in that direction most of the time, but when hitting into the wind, remember any curve on a golf ball will be exaggerated. If you play a fade or a draw, expect the flight to move more when into the wind.

Lastly, the short game can be simplified by hitting lower, rolling shots around the green.  Keep the ball on the ground as much as possible so the wind does not affect your short shots.

Try one or more of these techniques the next time you play in the wind. And always remember, swing easy when it’s breezy!