Walking to Unlock a Cure 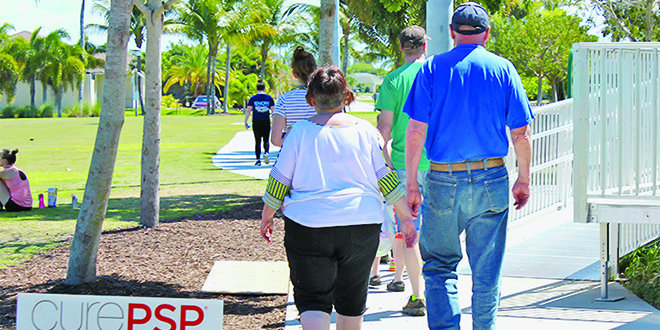 Photos by Jesus Calo | Over 200 people attended the CurePSP Walk on March 18.

The CurePSP Support Group hosted its 14th annual CurePSP Walk at Mackle Park on Saturday, March 18, 2017. With a clear sunny sky, the event had a successful turnout of over 200 people and raised $35,000 for the cause. The community came together to raise awareness for this prime of life disease. The walk signifies the unity between loved ones currently fighting the three diseases and friends and family members who honor them.

CurePSP strives to provide those in need with support and hope. The event fosters face-to-face communication and provides comfort to those who are caregivers, family members, friends and patients living with PSP (Progressive supranuclear palsy), CBN (Corticobasal degeneration), MSA (Multiple system atrophy), and other illnesses.

Because the disease can appear like Alzheimer’s, Parkinson’s and other mental impairments, a cause of death record can be misclassified, leaving advancement in understanding the disease in the dark. One of the most common early symptoms of PSP is having difficulty with balance. A patient with early signs can include forgetfulness and personality changes. After five or six years, on average, the imbalance and stiffness worsens to make walking very difficult of impossible. Trouble with eyesight eventually develops and can leave a patient’s mobility very 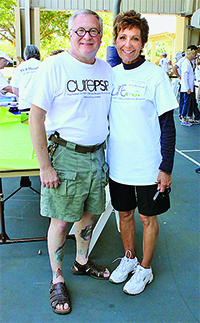 Mitch Kanefsky and Cindy MacDonald are all smiles after a successful event.

The disease very rarely runs in families, fewer than one in 20 people with PSP knows of even one other family member with PSP and detailed neurological exams of relatives of patients with PSP show no more definite abnormalities than exams of relatives of healthy people. But under the microscope, the appearance of the damaged brain cells in PSP is quite different from those in Parkinson’s, and instead resembles the degeneration in Alzheimer’s disease. PSP lacks amyloid plaques, which are deposits of waxy protein that are a hallmark of Alzheimer’s.

With such a hard disease to classify correctly, the organization devotes significant funding to research. There are three goals: Identify the cause and development of PSP and similar diseases, develop practical diagnostic tests and develop treatments that will prevent, slow, or reverse the progression of the diseases.

The annual event provides an opportunity for the community to learn about the diseases, find ways to manage their difficult challenges and connect with others who are also struggling with the disease. People came from near and far to attend the event, from places such as Miami, Boca Raton, Palm Harbor, Georgia, Canada, and even Norway. The result of a small community bringing guests from all over inspires 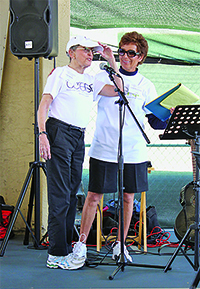 members of the community fighting the disease to remain strong.

Volunteers are essential to the success of the annual CurePSP walk. There is great value in the power of numbers, support flows steadily when a community leans on one another for support. The major goal of CurePSP is to increase awareness among the public and the medical profession to correct its diagnosis. Joan Reifler is the woman with a vision who organized the first walk over a decade ago. This was her last year attending the walk, as she is soon relocating up north. The event honored her for all her valued effort, which will continue to impact the community for years to come.

There were raffles prices, a silent auction and at-will donations at the event. Among the long list of coveted prizes, there were gift cards to restaurants around Marco and Naples, movie tickets for two and $100 scratch off ticket boards. The crowd cheered with excitement as Cindy MacDonald announced the winning ticket numbers after the walk.

Finding the right support during this process is key. The Southwest Florida PSP support group meets every second Saturday of the month at Manor Care in Lely Palms in Naples.