Wagner Running His Way to a Scholarship 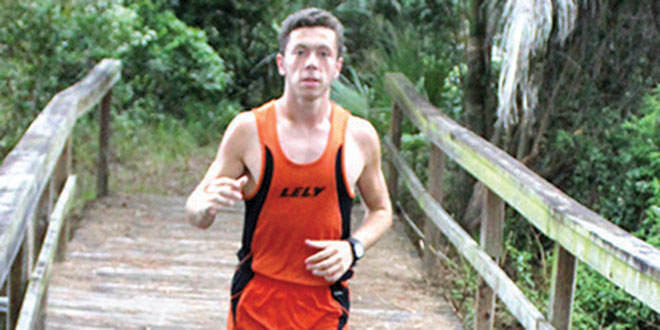 Photo by Roger LaLondeCross country is a team event, but it is also individual. Where a runner finishes counts toward team points that decide the winning team. Often it is running alone, like Josh Wagner, over courses that can include running in woods, over a bridge and finishing on grassy surface or a straight-away on a high school track.

Marco Island’s Josh Wagner has toed the line in just four cross country races and his poorest finish has been second! Even more unusual is that they are his initial forays into cross country.

A Lely senior, Josh played cornerback for three years on the Lely football team, while running track in the spring. “It was a hard decision, I love football, but my success in running gives me the chance to get a DI scholarship” he said. DI colleges give out full scholarships. Lower levels vary on what they can award.

He also won the Bradenton Invitational, after racing to second in his first cross country meet at the North Fort Myers Invitational to start the season.

The Northport win led to a talk with a Troy University coach, speaking with him and his family. Wagner plans on visiting the DI University, located in Troy Alabama, after his competition at the Disney Invitational on October 8. That is his target date to break 16 minutes where competition will be stiffer.

And Wagner thinks he is not a “fully developed runner yet.”

He also knows that familiarity with the courses will make a difference. While experienced runners often know the courses, Wagner is racing them for the first time.

“Once I know more about the courses I will be able to plan my race. Right now I don’t even know where the finish line is,” he said.

Wagner is comfortable with running in the pack or behind the leader early in the race.

“My coach (Mark McGarity) said to stick with them. I think that gives me an advantage as I feel confident that when I make my move there will be enough in the tank for a strong finish.”

Wagner decided to run cross country after having an outstanding track season where he came in ninth at state in the 3,200 meter competition.

“Josh knows that running is his best chance for a college scholarship,” McGarity said. “There are a number of colleges watching him.

“After he ran 17:06 to win the Mariner race I expected him to get into the 16’s pretty soon, but not that low already. He really ran a smart race.”

Wagner made his decision to change to track after getting a letter from the University of Miami last spring.

It was a week before states when he received a letter from the University of Miami. It was more of an inquiry, asking if he ran cross country.

The letter began a process for Wagner to run his way to a scholarship offer, or more.

“That’s when I decided to run cross country and work on shaving my 800 (meter run) next track season.”

“I realize there is a difference from DI and DIII schools. I want to be in position for a scholarship (at the higher level). I love running and made the decision that this is what I want to do in my four years in college.”

His mom Eileen is proud of her son.

“He is working so hard. I couldn’t be any prouder of his accomplishments. I love watching him run. It’s always and exciting race,” she said.