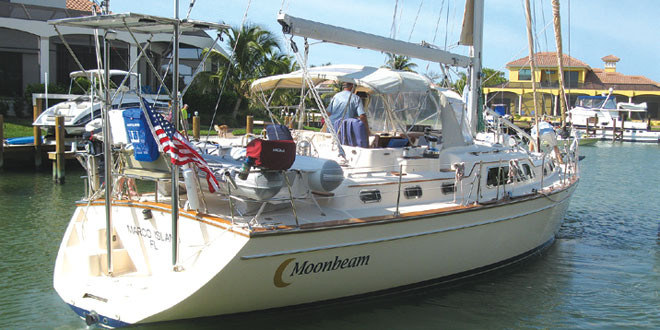 I will be following s/v Moonbeam and her crew as they sail from Marco Island and through the Pacific Ocean to New Zealand completing a Pacific Circuit. Moonbeam is a 52’ Island Packet Cutter. There will be updates from time to time as they push forward to achieve their objective which is from Marco Island to New Zealand via the Panama Canal, visiting many South Pacific Islands along the way. A return trip to Marco by completing the circumnavigation is expected in the Spring of 2014.

Ken Bardon, owner and skipper of the s/v Moonbeam, is a local Marco Island resident and USCG Captain. Ken has made three transatlantic passages, sailed many times to Bermuda and to the Caribbean, raced to Cuba twice and once raced across the Gulf of Mexico to Isla Mujerea, Mexico. A sailor for many years, he has accumulated more than 80,000 blue water miles. Aside from sailing, Ken is a Command Mission Pilot for the Marco Island Civil 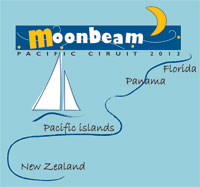 The crew members for the first leg of the voyage to Panama are the following:

Mike Cain, from Fort Myers, whose offshore experience includes several trips to the Bahamas on his own 35’ sloop “Zydeco.” He also crewed on a Caribbean passage as well as crewing for Moonbeam on a passage south from New York to Florida.

Lee Henderson is a Marco Island resident. He crewed for offshore trips on some of Moonbeam’s passages between New York and Florida. A former navy pilot/navigator, he owns a PDQ catamaran and is past Commodore of the Sailing Association of Marco Island. Lee is currently Commander of the Marco Island Civil Air Patrol.

Alan Picard is a longtime friend of Captain Ken Bardon. Alan, who is 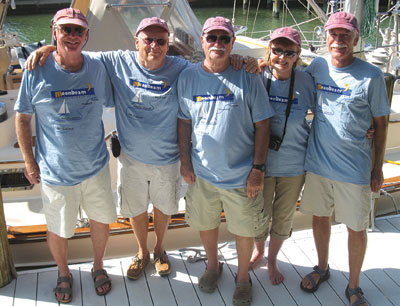 a Canadian citizen and a Florida resident in winter, was a guest at the Bon Voyage gathering. As we were all getting ready to say, “Bon Voyage,” Moonbeam took on a surprise crew member. Alan said he wished he was going on the trip. Bardon responded, “There is enough room for you!” Alan quickly decided he would go as far as Guatemala. Luckily, Alan just happened to have his passport with him. However, Alan needed a few things before going sailing! He quickly rushed to a local store to buy a few pairs of shorts, tee shirts and a few toiletries.

The plan is to sail from Marco Island to Guatemala and spend a few days enjoying the River Dolce. This is a 760 mile trip. Next, they plan to sail from Guatemala back to sea for the 790 mile passage to the Panama Canal entrance. They will continue sailing southward from Panama across to the Marquesas to Tahiti. In May, they will continue sailing from Marquesas to Tahiti. Then, they will sail onward to the 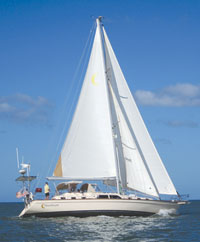 Pacific Islands. June through August, they will visit and explore Tahiti, Fiji via Cook Passage, Samoa and the Tonga islands. September will continue with exploring Fiji to Australia and New Zealand. From October and on into 2014, Moonbeam will be in New Zealand to prepare for her return trip. Having done some long distance sailing over the years, all I can say is “Phew!”

Are you tired yet? I know I am just writing about it. I know from my own experiences, the circumstances and situations that one comes across are not always easy. Once you are out there on your trusty sailboat, all is not moonlight and calm seas. You have nowhere to go except onward or, if necessary, “heave to.” This is easier said than done.

This is just an introduction to the journey which began on Sunday, January 13, 2013. We, his fellow sailors and friends, wish Captain Ken Bardon and the crew of s/v Moonbeam fair winds and following seas.

Stay alert and look to the Coastal Breeze for future updates on the Journey of the S/V Moonbeam.