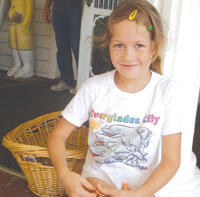 BudgetTravel.com has put the call out for folks to vote on “America’s Coolest Small Town” in 2014, and Everglades City is in the running. For the next 17 days (through Feb. 25), voters can go online to cast their ballot for one of the 15 small towns listed. The winner wins bragging rights.

Everglades City has some stiff competition, though. There are towns that have been settings for movies; that are historical gems; that are recreation havens; that are part of national parks; that were homes to former U.S. Presidents; and that are culinary delights.

Still, Everglades City has something that none of the other towns do — access to the Ten Thousand Islands of Everglades National Park and to some of the best backwater fishing in the U.S. Combine these elements with the amazing wildlife — both in and out of the water — that thrive in the mangrove estuaries of Everglades City, and it is a shoe-in to win.

So cast your vote now at: www.budgettravel.com/contest/vote-for-americas-coolest-small-town-2014,16/#vote-21477. The clock is ticking!