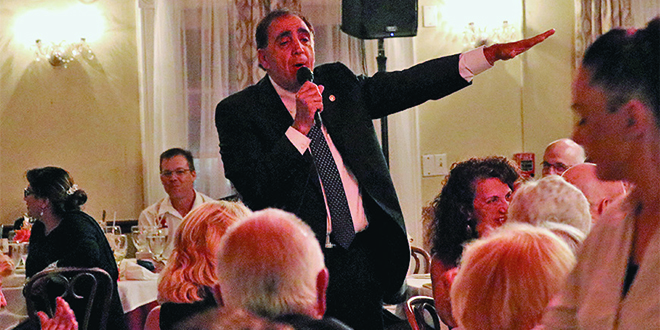 An animated George Abounader auctions of an item for $3,000 at the Spirit of Marco Awards.

The 9th Annual Spirit of Marco Island Awards drew a sellout crowd to the Bistro Soleil restaurant on a recent Sunday evening, as friends and co-workers assembled to pay their respects to the six recipients of the Noontime Rotary’s selections this year.

The event also serves as a fundraiser for the Rotary Club, which contributes funds raised through its various functions back to the community and other worthwhile philanthropic efforts.

Attendees were also invited to participate in a silent auction as part of the evening’s activities. From facials to fishing trips, to a stay in a luxurious suite on the beach or a cooler full of adult beverages, the bidding was hot and heavy.

Recipients reminded all in attendance of their special commitments to the organizations they hold close to their heart.

Bruce Graev is one of those “stealth” volunteers. “He works quietly and gets the job done,” said Al Diaz, the master of ceremonies for the event. He has served on a number of boards and committees and has been a past president of the Noontime Rotary Club. In addition, he is a founding member, vice president and director of the Marco Island/Goodland Cultural Alliance. He also finds time to serve as the president of the Marco Island Historical Society, in addition to being an active member of the Jewish Congregation of Marco Island.

The Lowes were recognized for their contributions to both the Marco Island Charter Middle School (MICMS) and the YMCA. Scott Lowe, who is the CEO of Physicians Regional Healthcare System, is a director of the Marco Island Charter Middle School board, where Jayme Lowe also generously volunteers her time as the MICMS nurse. In addition, both serve on the board of the YMCA. Jayme is the 2018 president elect of the YMCA board and both have contributed a great deal of their time to both organizations, as well as other civic activities.

Gayle Thawley is a local Kiwanian, and her commitment to children and education shines through whenever she speaks about her life’s passion. She has given countless hours of her time to efforts by Kiwanis, has served as a past board member of the Marco Island Academy and started the Educational Theatre effort by the Historical Society. Her passion for the success of the Marco Island Academy was very evident as she spoke fervently about their accomplishments and made a pitch for their latest fundraising effort to build a gymnasium for the school, to the delight of all attending the event.

John DeRosa is a proud 31-year veteran of law enforcement from New York. The demands of his job and his commitment to excellence in his field didn’t leave him with much time to be involved in many community activities. However, when he moved to Marco he was committed to making that change in his life and got involved within the community. If you enjoy the annual Kiwanis Club Car Show each year, thank John and his dedicated band of Kiwanis volunteers. He helped to start it and made it one of the most anticipated events on the island.

Marco Island can be proud of her volunteers, and during this annual event the Noontime Rotary Club of Marco helped to shine a little light on those that do so much and ask nothing in return.