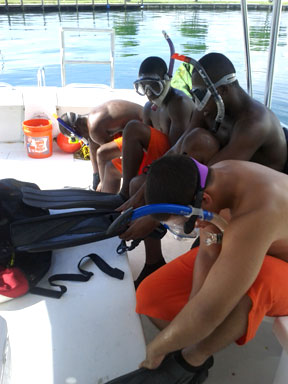 Vocational and career exploration can take many forms, and students that pass the advanced swim test and that score out in the top ranked students at AMIkids Big Cypress can take scuba lessons at the residential boys program located deep in the Big Cypress National Preserve. The program has boys ages 14-18 that are completing their court ordered sanctions at the innovative program. For the first time they go to school every week day and learn life skills by trained staff who are dedicated to ensuring that the boys get every opportunity to get their lives back on course.

Vocational training is just one way that the staff work with the boys. SCUBA teaches safety, team work, environmental science, physics, and is a reward for great behavior and effort. Xavier, joined the program several months ago. He struggled the first few months, cursing staff, picking fights with other boys, disrupting classes and arguing about everything with anyone. In short, he was not a happy camper. He didn’t want to be there, didn’t want to take responsibility for how he got there or what he did while he was there. Slowly, Xavier started changing. Without the ability to walk off and do as he pleased, as he did at home, he was unable to go on trips like the kids that were following the rules and working hard at their schoolwork. Xavier really wanted to go canoeing. He heard the other boys talk about, but Xavier was not a good swimmer, so he asked to be taught to swim, so one he earned the 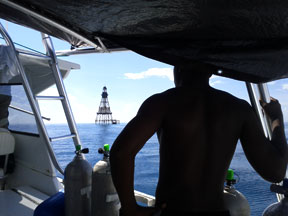 chance to go the pool and started working on his swimming. Eventually Xavier worked hard and passed the swim test and went canoeing. After he experienced success there, he decided that he would try something “…I never dreamed of doing something like going underwater” said Xavier after his first day training on the equipment in the swimming pool. Then the big day came to go on his first dive in the ocean. Early, before the sun came up, the crew packed the gear in the school vehicle and drove to Miami, to dive with our sister program, AMIkids Miami-Dade South. They met Ramon, the boat captain and dive instructor who left Cuba on a homemade raft a few years ago and now teaches his Miami kids to dive.

The first dive was on the Fowey Rocks lighthouse reef, shallow but full of life such as soft corals, hard corals, Nassau grouper, a stone fish and lots of snapper fish. A storm rolled in so we headed back, broke through the other side of the rain and we were back in sunny skies again, so we headed over to a nearby reef called Neptune Memorial Reef and dove on the ornate statutes that grace that man-made reef. A great day that broke the cycle of low expectations the boys had for themselves. If they can do this, they can do anything they set their minds to. Xavier is a different kid, ready to go home with a new attitude. Now he wants to join the Navy and be like his aunt in the Marine Corps.