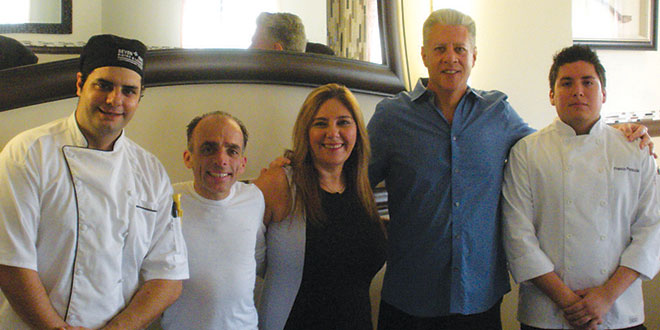 The Seven-O-One Bistro & Lounge is striking a blow for culinary uniqueness on Marco’s restaurant scene.

The restaurant features two underrepresented, if not absent, cuisines on the island, Peruvian and Cuban, along with Japanese sushi and American dishes.

“For us, it was something new to bring to the island, and because my wife is Peruvian and we love the food,” said Davide Valenti, who co-owns Seven-O-One along with Bob Berkowitz.

Located in the space that was formerly home to Berkowitz’s Porky’s Restaurant and Lounge, Seven-O-One began its soft opening on Halloween and celebrated its grand opening on November 9. The interior has been complete redesigned, with the former occupant’s rustic look replaced with an airy, modern, upscale design, including white tablecloths. Unchanged is the space’s division into a dining room on one side and on the other, a smaller, lounge-bar area.

For a taste of Peru, there are traditional dishes such as the classic ceviche appetizer, a blending of white fish marinated Peruvian style and topped with diced red onions, sliced tomato and Peruvian white corn in lime juice. Aside from Cuban sandwiches, there are such selections as ropa vieja, which is slow-cooked, shredded pork or beef, served in Cuban mojo sauce and served with black beans, white rice and plantains.

The menu was drawn up by Valenti, his son Franco Paniccia, who is also handling co-head chef duties right now, and Valenti’s wife Juany, who was born and raised in Peru.

“This is contemporary cuisine and we want to make sure that we get in bits and pieces of every culinary aspect, in the traditional way that you would find it in that country,” said Paniccia. We’ve tried to develop dishes with creativity, with texture, with color and with taste to make sure they will satisfy every customer that comes in.”

Paniccia said the pricing is intended to make Seven-O-One an affordable dining option for families to visit several times a week.

The family also owns and operates Davide Italian Cafe & Deli, located a short distance away, off of Bald Eagle Drive in the Island Plaza, which they opened in 2010. Valenti said Seven-O-One came to be as a result of casual conversations he and Berkowitz would have when his now business partner would dine at Davide.

“It was a little talking today, talking tomorrow,” said Valenti. “It started as a joke and then one night he said, ‘We should get together and do something.’ He said, ‘I would love to have you as a partner.’ I said, joking, ‘I would like to be part of your business.’ And one day he made me a beautiful proposal that I couldn’t refuse.”

Like Davide, Seven-O-One is a family affair, with Valenti and Paniccia serving as general managers, and Juany Valenti handling administrative tasks.

Seven-O-One is open for lunch, Monday through Saturday and dinner is served seven days a week. The lounge has its own menu and serves food until 1 AM.

The lounge also features live entertainment in the evening, Thursday through Saturday. There are bands playing tunes from the seventies through today, and Miami DJs who bring dance music with a Latin flair to Marco. Happy hour is from 3 to 6 PM and 10 PM to 2 AM, daily. Future plans call for adding jazz, salsa dancing and comedians to the entertainment calendar.

“We’ll definitely entertain the island,” said Paniccia. “No doubt about it, we’re going to be Marco’s hotspot.”