VIRGIN ISLANDS I, A BOATER’S PARADISE 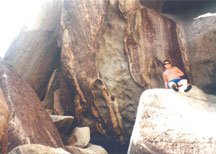 Eric, our son, resting among the boulders at the Baths. SUBMITTED PHOTOS

The British Virgin Islands and the U.S. Virgin Islands collectively make up the whole of the Virgin Islands. They have separate governments. The US Virgins is a US territory while the British belong to England. The BVI’s, aka British Virgin Islands, are made up of about sixty separate islands. The four main islands are Tortola, Virgin Gorda, Anegada and Jost Van Dyke. Cooper Island, Beef Island, Necker Island (owned by Sir Richard Branson,) Norman Island, Peter Island are just a few of the better known islands. There are many more. You could spend weeks just “liming” around among these most beautiful and friendly islands.

Frankly, we preferred the BVI’s more than St Thomas and the US Virgins. Don’t misunderstand me. We certainly enjoyed the US Virgin Islands such as Trunk Bay which has an underwater snorkel trail for beginners.

Spanish Town located on Virgin Gorda was a major settlement on the island. The Virgin Gorda Yacht Harbour is located in the middle of Spanish Town. Also, Biras Creek located on the south end, and Bitter End Yacht Club and Resort with mooring balls and other amenities, were available for visiting yachts. Check before you sail there as to which services they have still available for boaters. If you belong to a yacht club back home, check to see if they have reciprocity with any yacht clubs anywhere in the Virgin Islands.

You must stop and visit the Baths which are located on the southwest side of Virgin Gorda. It is incredible. The area is made up of huge rocks and boulders. The sea water rushes in and splashes onto the boulders, the water shallow enough so that you can wade through it. Please refer to a more updated guide before going anywhere in the Virgins as sands shift and get blown away.

The British Virgin Islands were more to our liking. They were more boater friendly. St Thomas was more cruise ship friendly than cruiser friendly. My guess is that the cruise ship passengers get off the ships, shop quickly in the shops, visit the local sights and have to hurry back aboard the ship before taking off again. Cruisers are there for as long as they want. We are not in a

Herman and me (overlooking Tortola).

hurry to buy anything as we are on our own schedule and can be there as long as we want or need to be there.

While we were there, the winds began to blow harder. The winter winds picked up which gave a good reason to stay in port on our anchor. We hitched a ride to Roadtown for more fun ashore. When cruising, no matter if it is New England, the Bahamas or anywhere, there are cruisers. The locals, for the most part, are friendly and interested in who you are, how you got there, and what you think of their island or town. Never say that you do not like it or are disappointed, since they are proud and really try to please you. In many ways, you are their livelihood and bread and butter. This is true if we are talking about the Virgin Islands, Tahiti, Nova Scotia or wherever.

Of all the island groups that we sail into including the entire US Virgins and British Virgin Islands, I would put them on my list for top three favorite places along with Maine and Key West.

“Be still my heart!” It is not unusual for many famous people to fly in on their own plane and just meld with the population. Others sail in on their own yachts with a captain and crew. They just blend in with the rest of the tourists. They dress modestly, with little or no make- up so they can stay under the radar.

While we were there, rumor had it that a famous American actor was in town. Well, I looked and looked wherever we were in crowds, quiet shopping centers, bars, etc. My quest ended unfulfilled. I never did get to meet, “My American Idol,” John Travolta.

No matter how close or what the distance is between island nations, each nation is very different. Unlike here, where we can go for 100 miles from our home to another town, things are very much the same. Another thing I learned while cruising, especially in harbors that we enjoyed, nothing lasts forever. We had to move on.