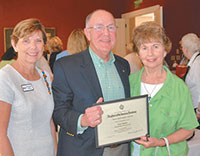 Most Vietnam veterans decline to tell their stories because the home front reception was extremely antagonistic during and after the war. So, it was an interesting experience for the Marco Island Chapter of the Daughters of the American Revolution (DAR) at its March 17th meeting to hear the firsthand experiences of a U.S. Marine Vietnam veteran.

Dan Walden and his wife, Pennie moved to Marco Island in 2014, three years after honeymooning here. He spent most of his career in management at UPS.

The focus of Walden’s talk to the DAR was his experience as a Marine in Vietnam. He served three years in the Corps, from 1968 to 1971, including officer training at Quantico, Virginia and assignments in Vietnam, at Camp Lejeune North Carolina and at Guantanamo Bay, Cuba.

Even all these decades later, it is clear that his wartime memories of privation, camaraderie, loss and sacrifice are as fresh today as they were at the time.

Let me give you the bottom line: I am proud to have served in Vietnam as a United States Marine. I didn’t kill innocents. I didn’t do drugs. I didn’t fight for the politicians. I fought for a country that I believed in, not knowing how awful were the actions of that country and those politicians. I was troubled that I did not come back to a grateful nation.

My job was to carry out my orders to the best of my ability while trying to keep my marines from getting killed. I was not that over-used word, a ‘hero.’ I was not really a warrior. But I did look out for my Marines, and I did serve with a great band of brothers.

The Marco DAR members showed their appreciation for Walden’s military service and for his presentation with a certificate and a DAR medal.

Nationwide and where Americans serve abroad, the DAR supports U.S. military members and veterans with more than 200,000 hours of volunteer time each year at VA hospitals and other facilities. Its members donate care packages, phone cards, and other needed personal items to America’s service personnel abroad. The group participates in naturalization ceremonies and recognizes outstanding veterans and ROTC/JROTC cadets.

The DAR has 180,000 members in 3,000 chapters worldwide. Members are women 18 years or older, regardless of race, religion or ethnic background, who can prove lineal descent from a patriot in the American Revolution.