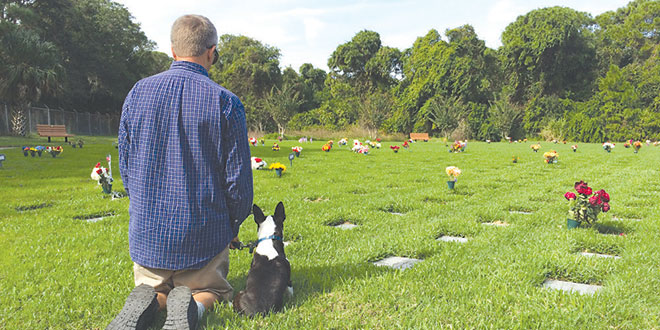 Bob and Bogart pay their respects at the Bay Pines National Cemetery in St. Petersburg, Florida. PHOTOS BY SAMANTHA HUSTED

You may have seen him riding around Marco. He’s hard to miss. On the back of his bike is a large American flag and on the front there’s a sign that reads, “Riding Florida Perimeter for Veterans.” Sometimes the sign changes, depending on what he’s riding for. But he’s always riding for something.

On November 10, Veteran’s Day eve, Bob Votruba began his 1,600 mile perimeter bike ride of Florida. He arrived back in Naples on December 7, Pearl Harbor Day. The purpose of his ride was to honor the veterans who fought bravely for our country. He says that he doesn’t want their sacrifice to be forgotten, especially for the younger generations.

In each of the 35 Florida cities Bob traveled, he would visit veteran’s nursing homes, museums, cemeteries, memorials and other organizations such as Veterans Helping Veterans. He would speak with retired service members about his mission and would thank them for all that they have done.

Bob is a part 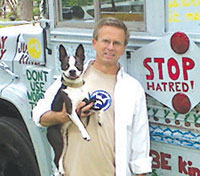 Bob and Bogart in front of the Kindness Bus. PHOTOS BY SAMANTHA HUSTED

of something called, “One Million Acts of Kindness.” An organization he started almost 9 years ago after the Virginia Tech school shooting. He and his Boston Terrier Bogart, travel the country by bus in order to speak to people about the power of kindness. This last month he traveled for veterans, but previously he has done rides to end bullying or prevent suicide among teenagers.

“Our goal is to reach out to children, teens, and young adults when their minds are open and their personalities are developing. We hope to teach them kindness, empathy and a generosity for others,” said Bob. “By living in kindness they will discover the happiness that they can bring to those around them, and ultimately to themselves as well.”

Typically Bob and Bogart will come to a city on the Blue Kindness Bus, a big blue school bus with encouraging words written all over it, and park it somewhere where it’s going to get a lot of foot traffic 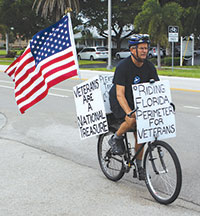 On December 7th, Pearl Harbor Day Bob rode into Marco Island after a 1,600 mile journey around the state of Florida.

or people driving by. Then Bob will get on his bicycle and ride around, promoting whatever message he deems important at the time.

“The kids and the adults seem to remember Bogart more than they remember me or my name anyway,” said Bob with a laugh. “I think they remember the kindness mission it does have a big impact, that’s for sure.

Bob is trying to create a mindset for as many people possible. He wants people to embrace kindness as a lifetime goal. He says he encourages people “to think about being kind all the time, with every opportunity. There are so many opportunities that present themselves over the course of a day. Any opportunity, you know, letting people go in traffic, holding the door, picking up litter, just general pleasantry. It really does make a difference.”

This upcoming January Bob will be visiting over 15 schools in Collier County, to speak to young people about his mission.

If you would like more information about Bob and Bogart visit: onemillionactsofkindness.com