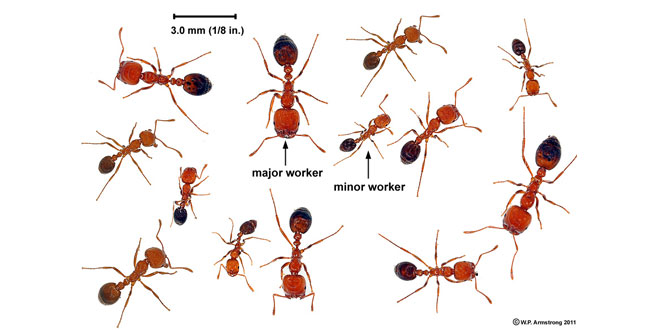 Few insects make their presence known like fire ants. A person may not feel them crawling up his or her leg, but the telltale painful burning sting certainly cannot be mistaken.

This is a familiar sensation for some who have visited Marco Island’s Veterans Park recently. Whether for the annual Christmas Tree Lighting Celebration, Movie Night in the Park or the Farmer’s Market, some people have had a number of stinger-to-skin encounters with the pesky little critters.

According to Marco Island Public Works Director Tim Pinter, whose department is in charge of dispatching the ants, the city has never received any formal complaints about the ants, but he is aware of the issue. “Most comments or complaints are received verbally by individuals who have attended events at the park in the past and are concerned with future events,” he explains.

Still, the city takes these concerns seriously, and treats the entire park three times a year. Public Works staff also spot treats weekly at the Farmers Market site during season and the rest of the park prior to special events. The city even tried using landscape contractors a few times to help eradicate the problem, but the result is the same: The ants keep coming back.

This comes as no surprise to entomologists (bug experts). Information from the University of Florida’s IFAS Extension indicates that Veterans Park is the perfect habitat for the invasive fire ants, who came to Florida by way of South America. After all, “they favor warm, dry, sunny open areas,” notes Pinter. “Ants are able to reproduce rapidly, and they have no known predators here in Florida.”

While most people are familiar with their nests being in large, visible dirt mounds, fire ants also can live in “rotting logs, around trees and stumps, under pavement and buildings, indoors and inside electrical equipment and utility housings, sometimes resulting in short circuits.”

Experts also agree that the fight against fire ants is one of winning battles — not the war. The ants are extremely resilient, and despite four traditional control methods, none of them will permanently eliminate the ants from an area. In fact, areas where a population may have seemingly been reduced by using pesticides can be reinfested within a month.

There may be a light at the end of the tunnel, though. Currently, two biological control methods, which have been effective in South America, are being tested in Florida. One includes the use of a decapitating fly that attacks the worker ants, causing them to hide instead of feeding, thus weakening a colony. The second method incorporates the introduction of a disease into a colony. Think of it as biological warfare against the troublesome pests. However, the verdict is not in yet on the effectiveness of either method in the United States.

So, the city — and residents — will have to continue to battle the fire ants at Veterans Park. Pinter recommends the following to avoid tussling with the fire ants: “The public should be aware that fire ants are common for all areas of the island, including home sites. Caution and observant behavior when they step, sit or eat in open areas, since these ants forage for food and drink when temperatures are between 65 and 95 degrees.”