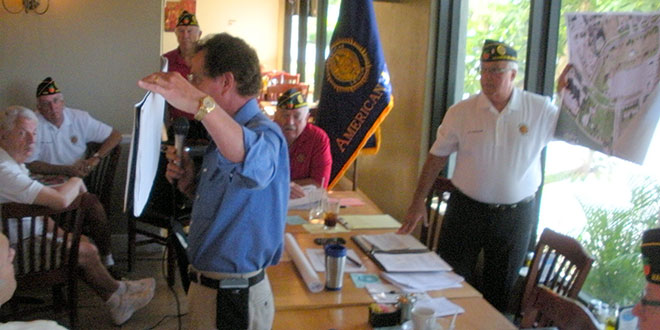 The topic generated controversy recently thanks to reports that the name “veterans” had been attached to the building’s name as part of the city’s effort to have $2.5 million in funding for the proposed project included when Florida’s legislature establishes its fiscal 2016 budget. Some Marco military veterans are concerned that community members may have the false impression that they have requested the structure.

“We’ve heard from a lot of veterans and a lot of the community, ‘Why are you looking for this building,’ ” said Post 404 Commander Lee Rubenstein after Hernstadt’s remarks. “The answer is we’re not.”

Hernstadt said that a 2009 master plan for the 10-acre park called for bathrooms, a band shell and a “cultural type” building to be created there. Those plans changed after the city hired a legislative lobbyist the city hired last year to represent Marco in Tallahassee to help secure funding for the city. “One of the projects we talked about was doing something at Veterans Park,” said Hernstadt.

He said the lobbyist discussed with proposed building with legislators and was told that it sounded like a viable project since it related to veterans.

The city’s budgetary request included $2.5 million for a 10,000 square foot, two-story building that would include the cultural building, band shell and bathrooms in one structure. The building would have two wings, one of 3,000 square feet and one of about 7,000 square feet, a 3,500 square-foot patio-band shell, 20 parking spaces under the building and another 100 spaces created along entrance roads to the park.

Hernstadt said the design is based on one used by another community, saving the city money on design costs.

“The community could decide what would physical things would be inside the building,” he added.

The proposal to the state calls for the building to include “veterans” its name. “We thought, perhaps we thought incorrectly, that we have a big enough building to devote space to the veterans,” explained Hernstadt, who said space could perhaps be dedicated to a military memorabilia mini-museum and space for veterans groups, such as the American Legion and Marco’s VFW post, to hold meetings.

But Hernstadt stressed the fact that it would be up to the community to make decisions on how the space is used or whether the building is even built.

“The do-nothing option is always there and there’s nothing wrong with that,” he said.

However, Hernstadt cautioned the audience to remember that without the veterans’ involvement and strong community support, it’s unlikely the proposed building would receive funding from the state for fiscal 2016.

The city has a “very unique opportunity” to secure the funding in the next budget. “Our local (legislative) delegation happens to be in power this year,” he said. “They won’t be next year.”

Hernstadt also said the rumor that city offices would be moved to the building, if it’s built, is incorrect, and that no additional staff would be necessary to operate such a facility.

He also fielded questions and comments from attendees of the luncheon meeting.

One audience member suggested staying with the master plan for forming a committee to revise it, rather than acting now because $2.5 million in state funds are on the table. Hernstadt said there would be nothing wrong with that approach.

“I wouldn’t want to do something because it’s a good deal and the community is not behind it,” he added.

Hernstadt said the city’s Parks and Recreation Committee will address the topic at its meetings over the next few months, so a clearer picture of the level of support for the proposed project should be available by early in 2016.