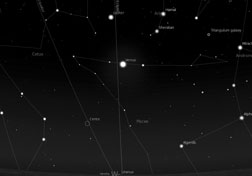 Look west tonight, or any night for the next couple of months, and you can not fail to see Venus. In fact you can even see Venus in broad daylight with a little perseverance. The easiest way is to get up before dawn and keep an eye on Venus as the sun rises – I have done this many times. But this approach will not work until fall when Venus will be visible in the morning. To see Venus in the afternoon requires knowing exactly where to look; Venus is easily lost in all that blue sky we have this time of year. You might try getting familiar where Venus appears just after sunset and this should enable you to predict fairly closely where it will appear before the sun sets. Once you actually spot it Venus is remarkably easy to see.

Venus has the inside track in the eternal race around the Sun, so it moves with great speed. This is well displayed in the next few weeks as Venus approaches Jupiter in the western sky. Jupiter plods along, moving slowly from west to east taking roughly a year to pass through a single constellation. By comparison Venus will rocket upwards and pass Jupiter about March 13th; from then onwards Venus will be higher than Jupiter in the night sky.

When Jupiter and Venus pass closely to each other in the sky this is termed a conjunction by astronomers. This particular conjunction will not be a particularly close one – the participants being about three degrees apart at the closest point – but it will still look lovely. At extraordinarily rare times a conjunction will be so close the planets are not easily separated by the naked eye.

Speaking of rare, on June 5 Venus will pass directly in front of the Sun; this event will not occur again for over 100 years. This event is called a transit and only occurs when the geometry of the Solar System aligns just right. In brief, Venus must cross the ecliptic at the same spot where the Sun happens to be. Since the Sun is only one half degree across and Venus moves so fast transits are rare. They occur in pairs 7 years apart, then a gap of a century or so before the next pair. We discuss it further soon!