VALENTINE’S DAY: Where and when did it begin? 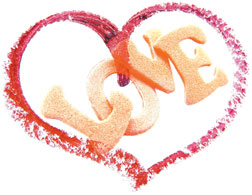 The custom of sending love letters and tokens of love is generally believed to have originated in Medieval England and France. Folklore recounts a belief that on February 14, half way through the second month of the year, birds begin to pair.

Chaucer’s Parliament of Foules relates, “For this was sent on Seynt Valentyne’s day Whan every foul cometh ther to choose his mate.” French and English literature of the 14th and 15th centuries refer to the custom of proposals and messages of love to one’s beloved on that special day.

There were three St. Valentines in the history of the Roman Catholic Church. One, a priest, another, a bishop, lived in Rome during the latter part of the third century. They were martyred and their bodies buried outside the city along the Flaminian Way. In ancient times, the gateway along this route was called the Flaminian Gate of Rome. Somewhere in time, the portal was called the Gate of St. Valentine. In the present day, it is the Porta del Popolo.

The third Valentine, of which little is known, was martyred in Africa along with his companions. St. Valentine’s Day is no longer an official feast day of the Church. However, it is generally agreed that one of the Roman Valentines, likely the priest, is the Valentine of lovers.

Valentine refused to obey the orders of Emperor Claudius II who forbade any more marriages because young men would not join his army, preferring to remain at home with their wives. Valentine continued to secretly marry couples in spite of Claudius’s edict and he was tortured and martyred on February 14 about the year 270.

Centuries later, February 14 marked both the anniversary of St. Valentine’s death and the belief about the mating of birds and over time the two traditions merged into Valentine’s Day. Perhaps it is Chaucer whom we must thank for immortalizing the day in his writings. In any case, Valentine’s Day has a long tradition in Europe and certainly was assured a permanent place in our country by the enterprise of a determined, hard working, young man.

In 1910 an 18 year old with nothing but two shoeboxes of postcards arrived in Kansas City, Mo. Joyce Clyde Hall sold all his postcards and when his brother joined him, Hall Brothers was formed. In January, 1915, a fire destroyed their small office and they were left with one piece of property, their safe.

The brothers found another location and went into debt in order to buy their own printing presses. This time they designed and sold their own valentines and Christmas cards. The first Hall Brothers Valentine’s Day greetings in 1910 were in the form of postcards. J. C. realized that people preferred to send private greetings and with the new presses, he was able to produce volumes of cards with envelopes which became immensely popular.

Color was applied by hand until the 1920’s and 30’s when the art of lithography was developed and perfected. The first cards were romantic, demure and lacy. In the 1930’s, cards reflected more relaxed, cheerful endearments along with the romantic cards which always remain popular on this lovers’ holiday.

In 1928, impressed with the hallmark used by goldsmiths to represent quality, J.C. put the name Hallmark with a crown above on the back of every card and a brand was born. Hallmark’s first licensing agreement was with Walt Disney in 1932. The company patented “Eye-Vision” greeting card display cases where shoppers could see and read the cards and make their personal selections. Before the card displays were introduced, cards were kept in drawers.

Valentine’s Day is the second largest holiday for cards purchased, second only to the Christmas season. The most recent Hallmark statistic for Valentines sold is 144 million. Cards and notes were often accompanied by candy, flowers, perfume and small, thoughtful gifts to celebrate the day. In recent years, marketing strategies have changed the holiday from charming remembrances to charging extravagant purchases which may or may not be desired by one’s heart’s desire!

Coastal Breeze News visited Marco’s three florist shops and The Harbor Goldsmith to inquire about their vision of Valentine’s Day and what they offer to Islanders and visitors who are planning to celebrate the holiday. According to Nancy Carrington, owner of Marco Island Florist, “Flowers and candy make the perfect pair. Norman Love Confections are offered exclusively at Marco Island Florist and combine well with a special bouquet or arrangement. Red roses are traditional, although white and pink are also popular.” Plush animals and balloons are favorite choices among younger people. Nancy has a beautiful array of stylish scarves, beautiful trays, vases, small boxes, designer ladies’ baseball caps (these are perfect for island living) and so much more.

Ray George of China Rose, expects a good year. “Many shoppers make their decision at the last minute. Men generally call or come in late and need help making their selections. My designers are very helpful and always manage to find the right choice for the buyers. We will have thousands of roses available as well as a full selection of other fresh flowers.” Flowers are often sent to work places as well as home and since Valentine’s Day falls on a Tuesday, Ray expects to do lots of deliveries to wives and sweethearts at their work, always a special surprise. “Christmas is our best season but it is spread out over several weeks. Valentine’s Day or the day before, is the biggest day. We deliver off island as far as Davis Blvd., Radio Rd. and well along Rt. 951 so we expect to be very, very busy.”

Gene’s Fifth Avenue Florist of Marco is expecting a good day for February 14 this season. Jerry reported that he orders well in advance and wholesale prices escalate every year just before Valentine’s Day. He explained that flower farms sacrifice the crop due just before February by removing the buds in order to get a double crop for the holiday when the demand is so high. He confirms that “red roses sell best, pink and white roses are also very popular. Mixed bouquets are preferred by older buyers.” Jerry agrees with the other Island Florists that Valentine’s Day and Mother’s Day are the two best holidays second only to the Christmas season.

According to The Harbor Goldsmith, Richard Alan, who writes a regular column for the Coastal Breeze News, “two to three days before Valentine’s Day, there is a definite increase in business. Valentine’s Day unremembered can cause real disappointment to a wife or girlfriend, like a forgotten anniversary. A special piece of silver, engraved, or a pair of diamond earrings will prevent all that disappointment! I have guys come in on Valentine’s Day with that panicked look on their faces wondering what they can find. You can advise about modest, thoughtful gifts all the way to the top of their budgets. When it hits them in the head that the day is here, they get in the shop. Nothing gets a guy out of the doghouse better than showing his wife or sweetheart she has not been forgotten. By the way, every gift will be beautifully wrapped, expensive or not!!”

Coastal Breeze News suggests that our readers shop locally! You will find wonderful businesses with local folks in charge willing to help you select that special gift for your valentine. From gift shops, galleries, clothing stores and salons, there is something for everyone! Remember our fine restaurants offering special menus and surprises to celebrate Valentine’s Day. After all, you are in PARADISE already!!! Happy Valentine’s Day from the staff at CBN!!