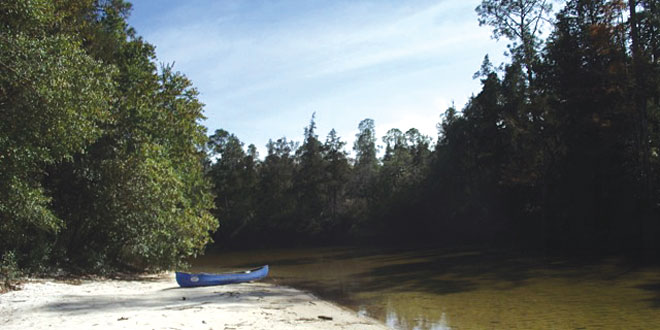 White sand banks of the Blackwater River, a result of quartz erosion from the Appalachian Mountains. PHOTO BY BOB MCCONVILLE

I’m always telling my family and friends that the two best months of the year in Florida are November and April. So, when I woke up on November 13 and it was 30 degrees outside with a windchill of 24 degrees, I thought, “What!!! In Florida?? Mid November!?” You bet.

Along with my wife Cathy (also a Master Naturalist and a full-time nurse at Physician Regional’s Marco Island Clinic), I took a trip to Florida’s panhandle to explore a few upland habitats. We experienced that cruel weather while staying in the Destin area. When we stepped out of our hotel that balmy morning we reverted immediately to caveman status.

I thought about calling the front desk, asking permission to burn the furniture to stay warm. It was just a thought. As is typical in Florida the cold snap only lasted a day. This still gave us several days to explore areas that are both unique and diverse.

On the way to Destin we stopped in a small town called Chipley about one hour west of Tallahassee. The attraction here is Falling Waters State Park. It boasts the highest waterfall in the state with waters cascading 73 feet into a sinkhole. We were fascinated by other sinkholes in the area as well, some up to 100 feet deep.

The real treasure here is the forest. Longleaf pines dominate the landscape. These tall, majestic trees once covered most of the southeast United States when Europeans first arrived. 98% of them are now gone due to harvesting. Slash pines are also prominent as well as dogwood, holly, mockerynut (hickory), some of the largest magnolias I have ever seen and several varieties of oak trees. It is a true uplands habitat; an ecosystem that is dry most of the time and does not support wetland plants.

The day after “The Big Freeze” (I swear it was attempted murder by Old Man Winter), Cathy and I ventured to Milton, about 40 miles from the Alabama state line. We were there to visit Blackwater River State Park. We were the only canoe on the water that day and the solitude was a soulful experience.

The banks of the river are lined with pure white sand, Mother Nature’s handiwork made of the quartz erosion from the Appalachian Mountains.

Truly beautiful to see. The river itself has one of the purest sand bottoms in the world. Hardwood forests in this section of the state include more species of trees and shrubs than any forest community in the continental U.S. This area also supports the

largest pineland ecoregion east of the Mississippi river and the second largest pineland region in the lower 48 states. These woodlands provide critical habitat for many wildlife species including the endangered red-cockaded woodpeckers.

Just a bit further to the east, in north central Florida, we have one of the least developed areas of the state. Here we will find pine communities, large hardwood hammocks and many scrub habitats. These scrubs are indicative of ancient sand dunes. Tens of thousands of years ago, sea elevations throughout Florida were once 300 feet higher than they are today. As water levels receded, remnants of beaches – these sand dunes – still remain. A geological stepping stone.

A mixture of scrubs, dry prairies and wet prairies, Payne’s Prairie Preserve is a great example of upland transition. This region supports over 700 species of vascular plants, nearly 20 percent of the plant species occurring in Florida. It is also the result of changes over long periods of time. Not too long ago even buffalo roamed this land.

Traveling down the peninsula through the center of the state, the Lake Wales Ridge is an ancient sand dune region but also an upland habitat. Don’t let the sand fool you. The transition from wet to dry over time has created a diversity of vegetation and wildlife here as well.

Do we have to travel far from Marco Island to experience this habitat? Not at all. Just a few miles across the Jolley Bridge, the mangrove trees stop and pine communities take their place. The difference may be just a few feet in elevation but that is all it takes. Sometimes just a couple of inches can cause change.

Change… It is constant and it is consistent. It is necessary at times to maintain the natural order of things. What happens in these uplands can effect the entire state. Plant and animal species will come and go, as it has been since the beginning of time. It is not always the largest or fastest species that survive, it is those most adaptable to change.

We should take a lesson from this. We should recognize change and learn to embrace it. Challenge yourself to get outdoors. Learn. Know. Appreciate. Embrace. Go take a hike.

Remember also…when you come across a rock in your path it just might be a stepping stone!

Bob is a Florida Master Naturalist and a member of the 10,000 Island Dolphin Project (The Dolphin Explorer) team. He is also a member of Florida SEE (Society for Ethical Ecotourism) and the Marco Island Chamber of Commerce.