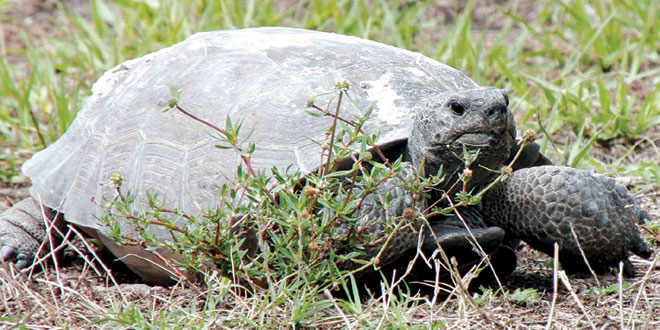 The following are brief updates, “animal bites,” on the unique mammal populations that are monitored in and around Marco Island. All are locally, state and even federally protected. Please enjoy the wildlife life, but do not intrude in their space, feed, water, or harass them in any way – this is against the law. If wildlife acts startled, agitated, or leaves the site as you approach, it is considered harassment. Move away slowly and enjoy the animal and its natural behavior.

It is estimated that the Florida Gopher Tortoise population has decreased overall by 30% in the past few years. Due to building and habitat loss, the Marco Island population closely mirrors this statistic. Past studies and surveys estimate the current population of gopher tortoises on Marco Island to be 300 to 400 tortoises. Being an isolated Florida population, this island population is further sub-isolated with large concentrations of tortoises found in the Estates and Sheffield/Dogwood Drive areas. Smaller numbers are seen on Spinnaker Drive and the west side of Hideaway Beach, on Horr’s Island (Key Marco) and areas that were previously disturbed such as the Steven’s Landing property. In the current city septic tank replacement project, over 300 tortoise burrows were surveyed just in the right of way areas of the Estates. Over 80 tortoises were moved out of the way of this construction project. They were protected and not removed from the island. As the area builds out, planting native plants, keeping natural areas and education on living with this species is the key to sustaining the dwindling, keystone species that is the Gopher Tortoise.

Red Tide, Karenia brevis, the toxic micro algae that bloomed and lingered off the southwest coast of Florida for months this year, has caused a record number of deaths to Florida’s favorite marine mammal. To date approximately 176 manatees in Florida have died due to exposure to this Red Tide event. Four have been recovered in the Marco Island area waters since January. Currently there is no presence of red tide in and around the Marco Island waters, but the bloom 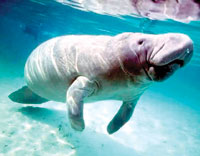 does persist off the coast of Charlotte and Lee counties in low levels. Manatees are commonly seen in the Marco Island River, island bays and canals. Look for the “footprint” they leave with their large tail fluke as they slowly swim below the surface looking for sea grasses to eat and calm water to sun on the surface. If boating, keep a 100-foot distance from the marine mammals and never chase with your boat or feed them. It has been an extremely tough year on our state’s “gentle giant;” please give them the chance to survive.

Last season’s Loggerhead Sea Turtles were impacted by Mother Nature. Early in the season, storms and high tides destroyed many nests on the Marco Island beaches. The final count of the season resulted in 52 nests created by these huge marine turtles but only 19 hatched, producing 1,453 hatchlings that made it to the Gulf of Mexico. With two major beach renourishment projects started on our beaches: one at South Beach; the other on Hideaway Beach’s North Beach, Mary Nelson, sea turtle monitor, has an early and busy season of monitoring to ensure these projects do not impact nesting or hatching.

To prevent disorientations and deaths to sea turtles, all beachfront properties and beachgoers need to be mindful of posted nest sites and must have no lights or illumination on the beach each night after 9 PM between May 1st and October 31st which is the Loggerhead sea turtle nesting and hatching season. Window shades should be closed, landscape lighting off, and no lanterns, fires, flashlights or photographic flashes are allowed after 9 PM. Every hatchling that makes it to the Gulf counts towards future generations of the turtles.

Late last fall, the island had a visitor for about 48 hours that took advantage of a resident’s swimming pool and many trash receptacles in the Sheffield Drive area of Marco Island. It was never seen or caught, but left a trail of tell-tale evidence of its visit. Residents of Key Marco and Hideaway Beach have also had bear visitors in past years. And areas in Naples, too.

Bears have a very keen sense of smell. Pet food and trash receptacles should be secure or inside a closed area if bears are frequenting an area.

A very common big cat seen all over the island, the Florida bobcat is easily identified by its “bobbed” tail and its tawny, golden coat. Last summer, one local bobcat would lounge like a bored house cat on the Tigertail Beach boardwalk in the early morning sun; Villa De Marco condominium enjoyed one on their riverside dock; Stevens Landing had bobcat kittens raised in their native Florida landscape; and there are many sightings of bobcat crossings on San Marco Drive between the Publix shopping center and Vintage Bay Drive. Slow down and be on the lookout.

For a few years, many sightings of coyotes have been reported near and around the golf course, along San Marco Drive and in the Estates area. Typically, very timid towards people, they feed on small mammals and carrion, even fruits and berries. Trash receptacles and pet food should be kept secure, dogs kept on leashes and cats and other small pets kept inside.

Please remember to give all wildlife respect and space to ensure they are not frightened and do not abandon their location. We all enjoy seeing Marco Island’s wildlife, so make your visit ethical: always approach quietly and if in a group stick together without surrounding the animal or its burrow location; do not lean or go under any site fencing or posting; if the animal is agitated, back away immediately.

Remember a photo of scared or startled wildlife is not a good photo! Any taking or harassment of wildlife should be reported immediately to the FWC at the 24 hour, 365 day/year toll free hotline phone number 1-888-404-3922 (FWCC).

For more information on local wildlife, locations to see wildlife, or interest in volunteering, please contact Nancy Richie, Environmental Specialist, City of Marco Island, at 239-389-5003 or nrichie@cityofmarcoisland.com. Get out and enjoy our paradise and please keep it wild!