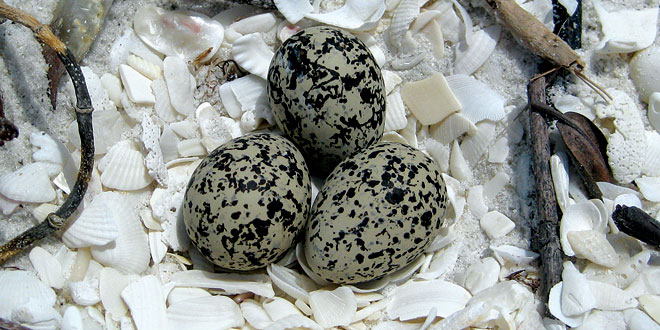 
The following are brief updates, “animal bites,” on the unique bird life populations that are monitored in and around Marco Island. All are locally, state and even federally protected. Please enjoy the wildlife life, but do not intrude in their space, feed, water, or harass them in any way – this is against the law. If wildlife acts startled, agitated, or leaves the site as you approach, it is considered harassment. Move away slowly and enjoy the animal and its natural behavior.

The popularity of the Marco Island Burrowing Owl population has boomed like never before this season. Most of the 117 Burrowing Owl burrow sites have visitors daily – some hourly – by walkers, bikers and vehicles. Everyone living or visiting on the Island, plus their friends and families, must have dozens of photos of these owls! This nesting season – which occurs from February 16th through July 14th every year – has just begun. Two of the sites already have confirmed chicks emerging from their burrows. Since last fall, at least a couple dozen new burrow locations have been documented and posted. As of right now, there are approximately 73 pairs of adult owls and approximately 11 single adult owls. This is almost a 20% increase in population – a sign of a healthy and sustainable population. With the first chick noted on March 8th, volunteers are continuing to monitor and count chicks.

Both documented Bald Eagle nesting sites this season have not been as productive as the many seasons past. The Island Country Club nest had a pair of Great Horned Owls take over the nest on the golf course. According to watchful residents, the Great Horned Owls have produced three owlets in the eagles’ nest. At the Marco Eagle Sanctuary, located at 995 Tigertail Court and managed by the Marco Eagle Sanctuary Foundation (MESF), it has been reported that nest building by the pair began right on time in mid-October 2012, with the pair showing mating activity in November 2012. In December 2012, an Audubon representative reported the eagles’ behavior patterns were indicative of the presence of eggs in the nest which would mean eaglets would hatch in January 2013. MESF reports that on New Year’s Eve, vacationing renters in a house located near the Sanctuary, set off multiple and extremely loud fireworks (comparable to those set off from the barge used for 4th of July beach fireworks). These explosive sounds frightened the eagles causing them to flee their nest and eggs for several hours. Typically eggs cannot survive for more than an hour unprotected, especially in seasonal cold temperatures. Behavior after this incident indicates that the eggs did not survive and no eaglets were hatched this season. Mating behavior of the two adult eagles was observed in early February 2013, but to date no nesting and subsequent hatchlings have been documented. The two adults have not abandoned their nest and the site is still considered active. The two magnificent adult Bald Eagles can best be seen at the nest, the nest tree or in one of the important perching trees 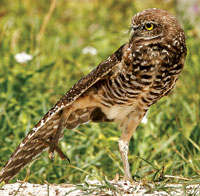 on the site around 7 AM or between 5 and 7 PM daily. The MESF has a very informative sign on site for visitors.

Wintering shorebirds have long found Marco Island the perfect habitat to rest and feed as they migrate south to the Dry Tortugas and South America for the winter months. The Sand Dollar “spit” and Tigertail Lagoon habitat complex is one the top five most important flyways for the planet’s migratory shorebird population. From fall through early spring, species such as, Red Knots, Oyster Catchers, Semipalmated Plovers, Sand Pipers, Piping Plovers, Dunlins, Short-billed Dowitchers, etc. all can be seen finding their niche for feeding and resting along the shores and on the flats of this sensitive and very dynamic ecosystem.

There is diverse habitat from mangroves to lagoons with sea grasses to sandy and vegetated dunes to open beach with a tidal zone that allow the many species of birds to rest and recoup their energy with plenty of food to fuel these birds’ long flights to their southern destinations. Once March turns to April, it is time for the nesting shorebirds to set up and produce young, laying eggs in spring and fledging their young by late summer. Least Terns, Black Skimmers, Wilson’s Plovers and, hopefully, Snowy Plovers, will be nesting very soon on the sandy, wide, vegetation-free beaches of Marco Island.

Year-round the federally designated Big Marco Pass Critical Wildlife Area (CWA) has areas posted for shorebird protection and conservation. Shorebirds, their nests, eggs and young are very camouflaged and sensitive to disturbance. Protected posted areas are recognized by posts, stringing and flagging tape and signage to keep disturbances from crushing eggs and young and flushing birds. Please respect the posted areas and give birds, both resting and nesting, the room they need to survive.

During the spring and summer, more areas of the beach and lagoon are posted, including on the main Marco Island beach area south of the Tigertail Lagoon, adjacent to the South Seas condominiums. The emergent sandbars in Caxambas Pass are also posted for nesting birds.

No vessel landing is enforced by the FWC. As bird populations decline all over the planet, our small island on the edge of the southern Gulf of Mexico and the Everglades is vitally important for many of these shorebird species to survive into the next decades.

Please remember to give all wildlife respect and space to ensure they are not frightened by your encounter and do not abandon their location. We all enjoy seeing Marco Island’s wildlife, so make your visit ethical: always approach quietly and if in a group stick together without surrounding the animal or its burrow location; do not lean or go under any site fencing or posting; if the animal is agitated, back away immediately.

Remember a photo of scared or startled wildlife is not a good photo! Any taking or harassment of wildlife should be reported immediately to the FWC at the 24 hour, 365 day/year toll free hotline phone number 1-888-404-3922 (FWCC).