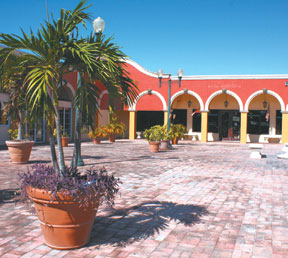 Venetian Investments’ plans to upgrade the restaurant space in the Marco Walk Plaza will move forward to a public hearing on January 7. The company plans to take the now defunct space formerly occupied by Konrad’s and Five Brothers Pizza and create Marco Prime Seafood and Grill. The Five Brother’s space will serve as the kitchen and back of house. The indoor and outdoor portions of Konrad’s will be the restaurant itself. Venetian Investments hopes to upgrade the outdoor seating area in the Konrad’s space. “The green area [designated outdoor seating] was formerly Konrad’s, so this petition is matter of fact,” recommended city Community Affairs Director Bryan Milk.

The owner of Marco Walk Shopping Plaza, Leon Agami, is looking to add a touch of Europe to the plaza. Similar to the grand Piazza in Florence, Agami hopes to construct a covered bar and seating area in the outdoor space between the old Konrad’s and Five Brothers Pizza locations. The 615 square foot area will add to the outdoor dining atmosphere that has been created over the years by DaVinci’s, Captain Brien’s, Rookie’s and Nacho Mama’s.

Submitting his petition to the city under his corporation Venetian Investments, LLC, Agami’s petition has confirmed the desire by DaVinci Ristorante owners to develop the restaurant space that once housed Konrad’s and Five Brothers. City staff has recommended the Planning Board approve the plans to go to City Council as, “the unique location of the property and accessibility by pedestrians from nearby hotels and condominiums lend the site to a desirable social, entertainment and activity center within the city. On November 2, the petition was brought before the Planning Board. As of press time, the meeting was yet to take place.

If approved, Marco Walk, which also hosts a variety of local shops, the Marco Movies theater, Beebe’s Ice Cream and a nail salon, will be a one-stop location for culinary flavors from around the world. To learn of the Planning Board’s decision, visit www.coastalbreezenews.com.